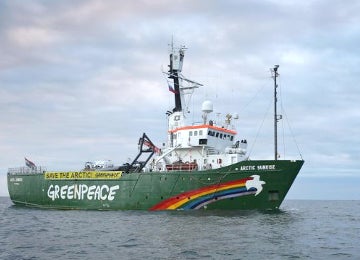 Greenpeace International has strongly rejected an allegation of piracy leveled at its ship Arctic Sunrise in the Russian Arctic, describing it as a desperate attempt to justify the illegal boarding of its ship in international waters.

Thirty activists remain under armed guard and without legal representation after the ship was boarded on Thursday. Greenpeace is demanding that it is allowed to contact the activists immediately.

Russia’s Investigative Committee announced on Friday that it is formally considering charges of piracy, despite the fact that piracy by definition can only apply to violent acts against ships committed for private ends—not peaceful protests carried out to protect the environment.

“Over a full day after our protest the Russian Coast guard boarded our ship outside of territorial waters, where there is right of free passage, with no legal justification whatsoever. This looks like a retrospective attempt to create that justification and avoid embarrassment. We will contest these allegations strongly and we continue to demand the release of our activists and the ship.”

More than 230,000 people have written to Russian embassies and consulates around the world since Thursday evening demanding the release of the activists. Greenpeace offices in over 30 countries globally organised solidarity protests.

Legal experts have joined Greenpeace International lawyers to declare the boarding of the ship in international waters as illegal. Professor Geert-Jan Knoops, an international criminal law expert based in the Netherlands, said on Friday:

“As far as the facts are known to me exactly, the Russian coast guard was not entitled [to board the ship].”

The ship’s co-ordinates at the time of arrest were 69 19.86’N 057 16.56’E, showing that the vessel was clearly outside of Russia’s territorial waters. The ship was also outside of the platform’s safety- or exclusion zone.

The crew of the Greenpeace icebreaker Arctic Sunrise remain in the custody of Russian authorities following an armed boarding of the ship in Russia’s Exclusive Economic Zone yesterday. The ship has now been under armed guard since 1900 Moscow time on Thursday. We can now confirm 30 activists have been arrested.

It is now more than 12 hours since Greenpeace International has had any contact with the ship, which appears to be heading west towards the Russian territorial waters.

Greenpeace International has not received any formal confirmation of possible charges, and the activists have been denied access to legal or consular assistance. More than 20 Greenpeace offices are organizing protests at Russian embassies around the world today.

“The safety of our activists remains our top priority and we are working hard to establish what is facing them. They have done nothing to warrant this level of aggression and have been entirely peaceful throughout. In our last phone call with the ship, the crew said that their spirit remains high and they have been boosted by messages of support from thousands of people who stand with them to oppose dangerous Arctic oil drilling.

“The real threat to the Russian Arctic comes not from the crew of the Arctic Sunrise but from Gazprom, one of the most reckless oil companies in the world today.”

According to one Russian media report, senior officials on Gazprom’s Prirazlomnaya oil platform described a Greenpeace safety pod used in the protest as “resembling a bomb.” In reality the safety pod—designed to keep the activists warm—measures 3 meters long by 2 meters wide, is brightly coloured, and heavily branded with Greenpeace logos. The safety pod was designed by competition winner Rubén Bodewig, an architecture student from Spain who beat 350 entrants.

According to activists on the ship, Russian FSB agents forced their way into the ship’s radio room and inflicted significant damage to communication equipment. Some activists were able to conduct interviews by satellite phone from the ship’s mess, where they are being held.

The Russian Coast Guard has boarded the Greenpeace International ship Arctic Sunrise and is arresting the 25 activists on board following a protest against Gazprom’s Arctic oil drilling operations. 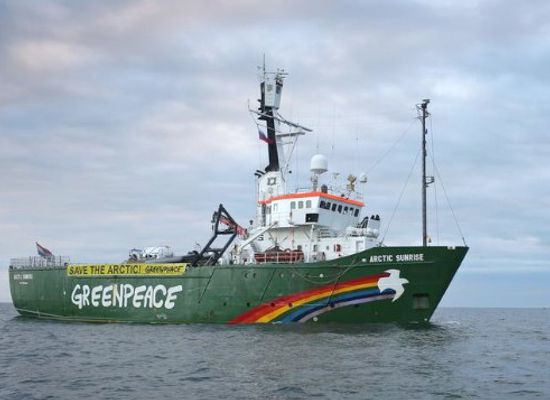 At the time of boarding, the Arctic Sunrise was circling Gazprom’s Prirazlomnaya platform at the three nautical mile limit. Coordinates confirm that the ship was inside of Russia’s Exclusive Economic Zone (EEZ), making this an illegal boarding by the Russian Coast Guard. The United Nations Convention on the Law of the Sea guarantees foreign vessels freedom to navigate in the EEZ of another state without interference of any kind. The coordinates at the time of the boarding were: 69-19-53N : 57-16-53E.

Using a helicopter and ropes, armed Coast Guard officials boarded the vessel and started rounding up the activists, assembling them on the helideck. Greenpeace International activists locked inside the radio room said they saw other activists detained on their knees with guns pointed at them.

U.S. Greenpeace Captain Peter Willcox is one of those arrested. Captain Willcox has skippered Greenpeace vessels for several decades, including the original Rainbow Warrior, which was bombed by French secret agents in New Zealand in 1985, killing one person.

The Coast Guard earlier arrested and held without charge two Greenpeace International activists who had scaled Gazprom’s drill platform on Wednesday in a peaceful protest.

“This illegal boarding of a peaceful protest ship highlights the extreme lengths that the Russian government will go to in order to keep Gazprom’s dangerous Arctic drilling away from public scrutiny,” said Greenpeace International executive director Kumi Naidoo.“We ask President Putin to restrain the Coast Guard and order them to holster their guns and withdraw. We are a peaceful organization and our protest has done nothing to warrant this level of aggression.”

“We are extremely concerned for the safety of all those on board the Arctic Sunrise, and the activists that were summarily detained yesterday,” said Greenpeace USA Executive Director Phil Radford.

“Extreme oil drilling is madness, that much is clear, and the risk of a devastating oil spill while worsening catastrophic climate change is plain,” Radford continued. “The scenes from the Russian Arctic over the past two days of heavily armed masked men protecting the equipment of massive oil companies and now, storming the ship of peaceful protestors, are highly disturbing.”

“We would urge the Russian Government to reassess who poses the real threat in the Arctic, as well as appeal to Shell—massive joint venture partners with Gazprom—to rethink their commitment to exploiting this fragile and unique part of the world, especially when done down the barrel of a gun,” said Radford.

“The Coast Guard has boarded our vessels with guns, threatened our activists at gunpoint and fired 11 warning shots across our ship, so who is the real threat to safety here?” said Ben Ayliffe, head of Greenpeace International’s Arctic oil campaign.