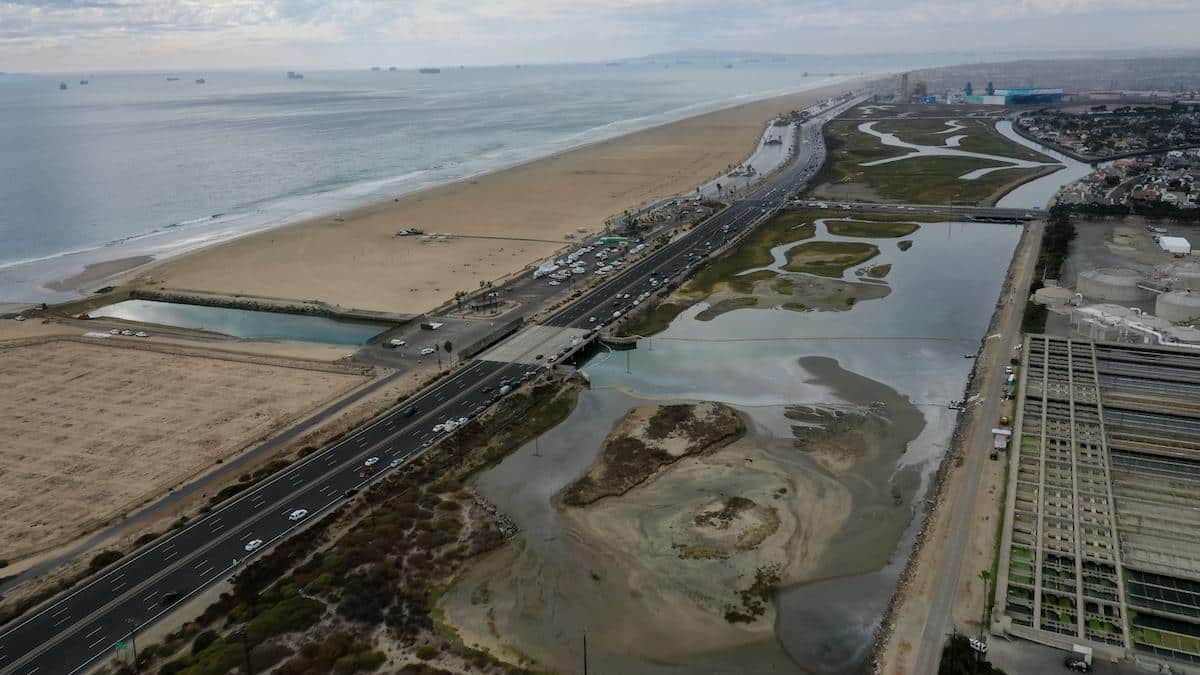 The devastating oil spill that spewed at least 126,000 gallons off the Southern California coast this weekend has highlighted the dangers of oil extraction.

The spill was likely caused by a leak in a pipeline operated by Beta Offshore, about five miles from the coast of Orange County, NBC4 Los Angeles reported. It has shuttered beaches from Huntington Beach south to Laguna, and oil has entered the ecologically important Talbert Marshlands. As of Monday, four oiled birds had been recovered and one, a brown pelican, had to be euthanized.

But for environmental advocates and politicians, the spill is more than a local tragedy. Instead, it represents the hazards posed by fossil-fuel extraction, and offshore oil drilling in particular.

“Big Oil’s offshore drilling puts the health of our communities, our local economies, and our planet at risk,” Representative Katie Porter, whose district lies adjacent to Huntington Beach, tweeted in response. “Cleaning up this spill is not enough; we need to stop these disasters from happening in the first place.”

The Center for Biological Diversity (CBD) further pointed out that offshore drilling in California relies on aging infrastructure. The spill occurred on a drilling platform called Platform Elly, which was built four decades ago. In 1999, its operator was fined for another spill.

“I’ve seen the aging oil platforms off Huntington Beach up close, and I know it’s past time to decommission these time bombs,” CBD oceans program director Miyoko Sakashita said in a statement. “Even after fines and criminal charges, the oil industry is still spilling and leaking into California’s coastal waters. The only solution is to shut this dirty business down.” 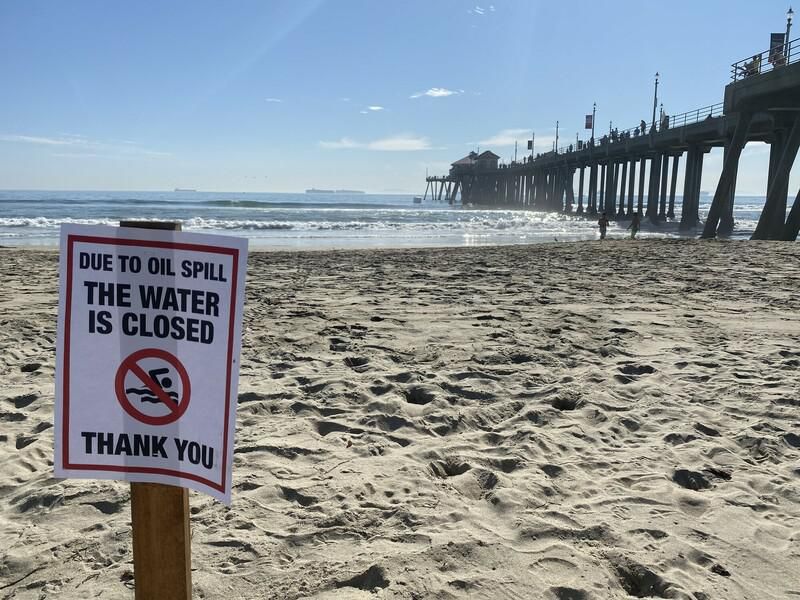 A sign at Huntington Beach warns against entering the water following a major oil spill in Orange County. Center for Biological Diversity

This isn’t the first time that California’s oil industry has harmed its unique coastal wildlife. In 2015, the failure of the Plains All American Pipeline’s coastal oil pipeline caused the Refugio Oil Spill. This disaster leaked more than 100,000 gallons of crude oil, most of which ended up in the ocean where it killed fish, birds and marine mammals, according to NOAA. The pipeline owner was found criminally responsible by a jury in 2018, and since then seven offshore drilling platforms in the state have been shuttered, CBD reported.

However, the history of the oil industry’s devastation in California goes back further than that. The site of the Huntington Beach spill isn’t far from the 1969 Santa Barbara spill, The AP noted.

This disaster was caused by a blowout on the Union Oil offshore drilling platform that spilled around 3.5 million to 4.2 million gallons of crude into the Santa Barbara Channel, making it the third largest oil spill in U.S. history. The spill killed thousands of birds and drew attention to how little say local communities had in the use of their waters. The incident helped inspire the first Earth Day, but now activists worry that not enough has changed.

“It’s frustrating that spills like this keep happening,” Natural Resources Defense Council senior attorney Damon Nagami told The AP. “I grew up near here, so this feels really personal.”

While there are steps that can be taken to better regulate offshore drilling, environmental advocates ultimately argue that the best way to prevent oil spills is also the best way to solve the climate crisis: stop relying on fossil fuels.

“This spill is yet another reminder that we can have healthy and safe communities, thriving coastal economies, and a stable climate — or we can continue drilling for oil. We can’t have both,” Monica Embrey, senior associate director of the Sierra Club’s Beyond Dirty Fuels campaign, said in a statement. “It’s long past time to choose a transition away from dirty oil drilling and toward a healthier, safer, clean energy future.” 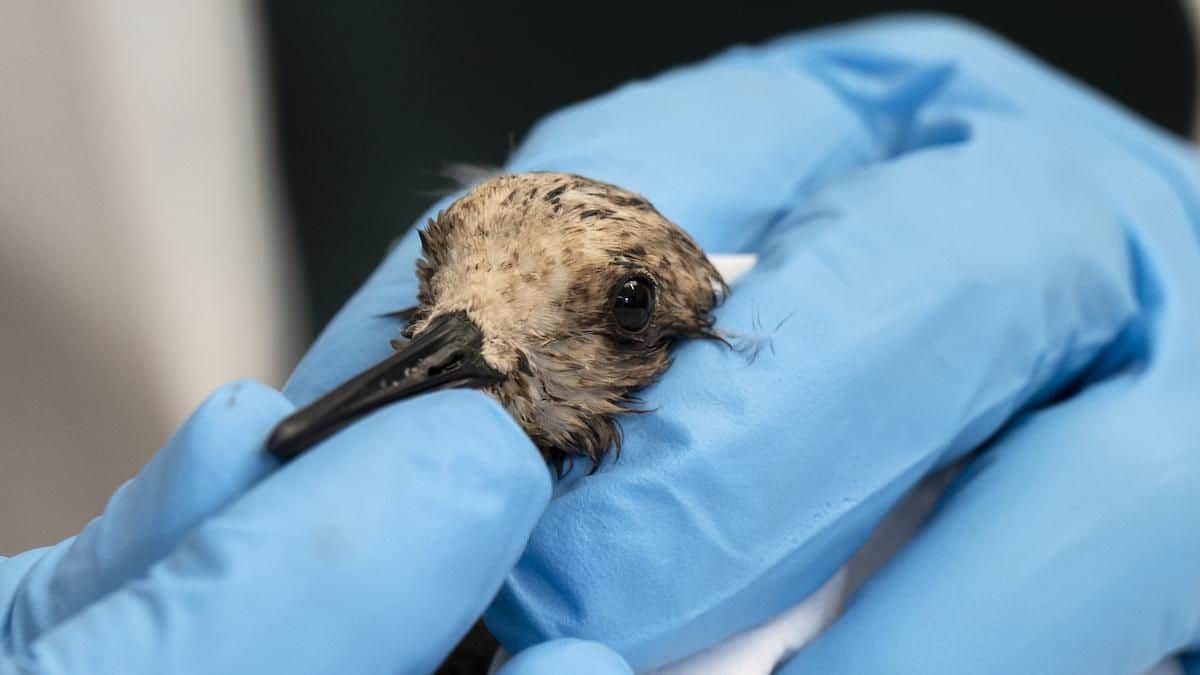 A veterinarian examines a sanderling, a small shore bird brought to the Huntington Beach Wetlands and Wildlife Care Center on Oct. 4, 2021 due to the oil spill. Mindy Schauer / MediaNews Group / Orange County Register via Getty Images