100+ Jewelers Say ‘No’ to Dirty Gold For Valentine’s Day 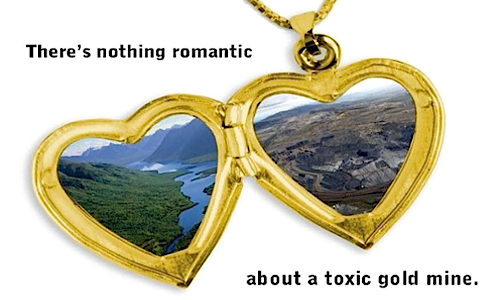 Just in time for Valentine’s Day, more than 100 of the world’s leading jewelry retailers—including eight of the top 10 in the U.S.—have committed to more responsible metals sourcing by signing the No Dirty Gold campaign’s Golden Rules.

“Dirty gold just isn’t romantic,” said Payal Sampat of Earthworks’ No Dirty Gold campaign. “Retailers don’t want consumers to associate gold jewelry with polluted rivers and child labor, and they are joining us in calling on the mining industry to clean up its act.” 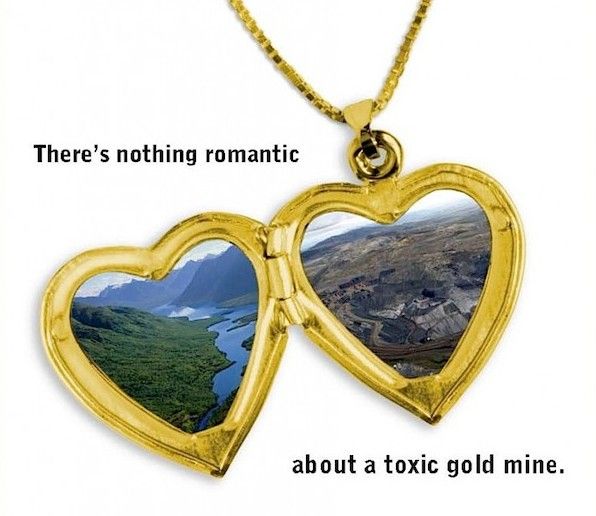 The Golden Rules are based on broadly accepted international human rights laws and basic principles of sustainable development, including respect for workers’ rights and protection of ecologically sensitive areas.

“We believe that socially and environmentally responsible jewelry should be widely available to consumers,” said Brilliant Earth co-founder Beth Gerstein. “We want to reduce the need for dirty mining of precious metals. That’s why we signed the No Dirty Gold campaign’s Golden Rules. And that’s why we use only recycled and ethically produced metals.”

Gold mining is one of the world’s most destructive industries. Producing a single gold ring creates at least 20 tons of mine waste. U.S. Environmental Protection Agency (EPA) data show that metal mining is the largest toxic polluter in the U.S. Around the world, mining has been linked to human rights abuses, perpetual water pollution, destroyed wildlands and long-term health impacts.

Valentine’s Day is one of the largest jewelry purchasing holidays of the year in the U.S. Nearly 20 percent of Valentine’s gift givers will buy jewelry, spending more than $4 billion according to National Jeweler.

Jewelers are in a unique position to influence mining industry behavior because jewelry demand accounts for the majority of gold demand in the U.S. and around the world.

The world’s largest jewelry retailers including Tiffany & Co., Target and Helzberg Diamonds have all committed to take steps to clean up irresponsible gold and metals mining. These include studying their metals supply chains, revising their supplier sourcing criteria to include the Golden Rules, increasing recycled gold content, and seeking more responsibly produced metals.

Dirty gold mining is booming around the world, in places ranging from Mongolia to Peru. In Bristol Bay, Alaska, gold mining threatens the world’s largest wild salmon fishery. According to the EPA, if built, the proposed Pebble mine would dump toxic mining waste directly into rivers, lakes and streams, and irreversibly damage the $480 million fishery upon which the regional economy and local subsistence-based communities depend.

“We can’t eat gold,” said Kimberly Williams, director of Nunamta Aulukestai, an association of ten Bristol Bay Native village corporations and Native Tribes. “Our way of life relies on Bristol Bay’s salmon, and has for thousands of years. Because the Pebble Mine would damage our salmon, it would damage our community.”