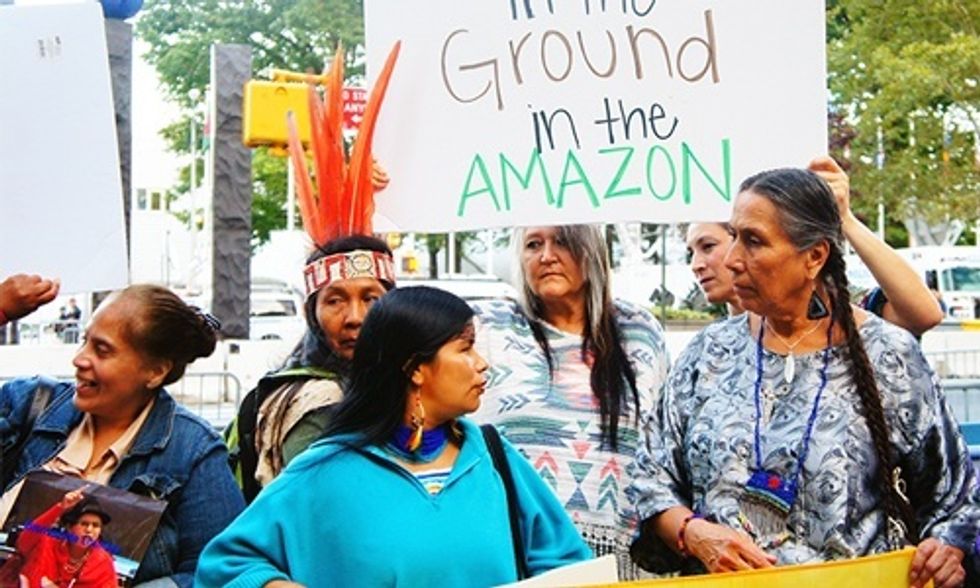 In late January 2016, the government of Ecuador signed a controversial contract with Chinese oil company Andes Petroleum, handing over rights to explore and drill for oil deep in the country's pristine southeastern Amazon Rainforest, known and revered by many as "the lungs of the Earth."

For decades, Indigenous communities of the southern Ecuadorian Amazon have successfully fought to protect their land from encroachment by oil companies, engaging in local action and international policymaking and campaigns with a powerful message of respect for the Earth's natural laws and the rights of Indigenous peoples.

At the forefront of this ongoing struggle are courageous Indigenous Amazonian women leaders who have declared, “We are ready to protect, defend and die for our forest, families, territory and nation."

In marches, protests, conferences and international forums, the women of the Ecuadorian Amazon are standing with fierce love and conviction for the forests and their communities, and navigating a brutal intersection of environmental devastation, cultural dislocation and violence and persecution as women human rights and land defenders.

The women have repeatedly put their bodies on the frontline in an attempt to halt oil extraction across the Amazon, often facing harsh repression by the state security.

“Women are the main victims [of oil extrction]—their ability to feed their families becomes impaired. There is deterioration of family health and they suffer the division of their communities and other forms of violence," women representatives of the Sapara and Shiwiar Nationalities and the Kichwa Kawsak Sacha and Sarayaku Peoples explained in a collective statement.

The coalition of women leaders has denounced this latest oil contract, which allows the Chinese corporation entry into their traditional territories, as a grave threat to their diverse lifeways and worldviews based upon living in harmony with nature, a violation of their rights and the health and integrity of the forest ecosystems and as a betrayal of immense international significance given the role of the Amazon in creating the cycles of water and air upon which all life on Earth depends.

The women are well aware of vital international climate research highlighting that global rainforests, of which the Amazon is the largest, are responsible for absorbing upwards of 20 percent of the greenhouse gas emissions causing climate change. To damage the vital regenerative systems of the Amazon in a race to dig up the fossil fuels that scientists are telling us should not be burned in the first place, is thus a double violence with disastrous implications.

The new Ecuadorian oil contract, encompasing more than 40 percent of the lands of the Sápara people, also threatens immeasurable cultural loss through the displacement of this vital and vibrant nationality of just 300-500, whose language has been official recognized by UNESCO as an "Intangible Cultural Heritage of Humanity."

Oil drilling in the Northern Ecuadorian Amazon. Kichwa and Sapara women leaders are working to prevent similar destruction in the south-eastern part of the country. Photo credit: Emily Arasim

“We reject the signing of this new contract which will affect our territories, the forest, the water and the air, exactly how we have seen it occur in Block 10 in the Province of Pastaza," the women explained, referencing areas in the northern Ecuadorian Amazon where communities are embroiled in a decades-long struggle with Chevron/Texaco over clean-up of vast tracts of oil contamination.

Unwilling to see their homelands fall to the same toxic fate as their northern neighbors, women leaders, including Gloria Ushigua (Sápara), Patricia Gualinga and Ena Santi (Kichwa), have been working diligently to make their voices of protest and alternative solutions heard inside top international forums, including the recent United Nations COP21 climate negotiations in Paris.

On International Women's Day, March 8, a coalition of Amazonian Indigenous women will take action in the city of Puyo, Ecuador, calling for the cancelation of this new oil contract.

International representatives of the Women's Earth and Climate Action Network, Amazon Watch and other allied organizations will join the women of the Ecuadorian Amazonian for an urgent march, forum and press conference, bringing global attention to the grave and intertwined social and ecological threats posed by expanding oil extraction in the Amazon, with particular focus on violence against Indigenous women protecting the Earth and their powerful resistance and solutions building.

“We have always defended the living forest, we are not going to stop this ever, we will not allow for the destruction of the Mother Earth who feeds us," explained Ena Santi, women's leader of the Kichwa people of Sarayaku.

Concerned people worldwide are demonstrating their support by signing and circulating a petition, "No Extraction in the Amazon! Women of Ecuadorian Amazon and International Allies Reject Oil Concessions, Stand for Rights of the Earth and Communities."

Through this type of strong global alliance of women reaching across borders to protect and defend the land that sustains us and to push back against mal-development based upon the exploitation of the Earth and its communities—there is hope and real meaning given to the celebration of International Women's Day.

Osprey Orielle Lake is the founder and executive director of the Women's Earth and Climate Action Network (WECAN) International and co-chair of International Advocacy for the Global Alliance for the Rights of Nature. She is the author of the award-winning book Uprisings for the Earth: Reconnecting Culture with Nature. Follow on Twitter @WECAN_INTL.

Emily Arasim has served as WECAN International's media and communications coordinator and project assistant since 2014. She is an avid photojournalist, writer and farmer from New Mexico.