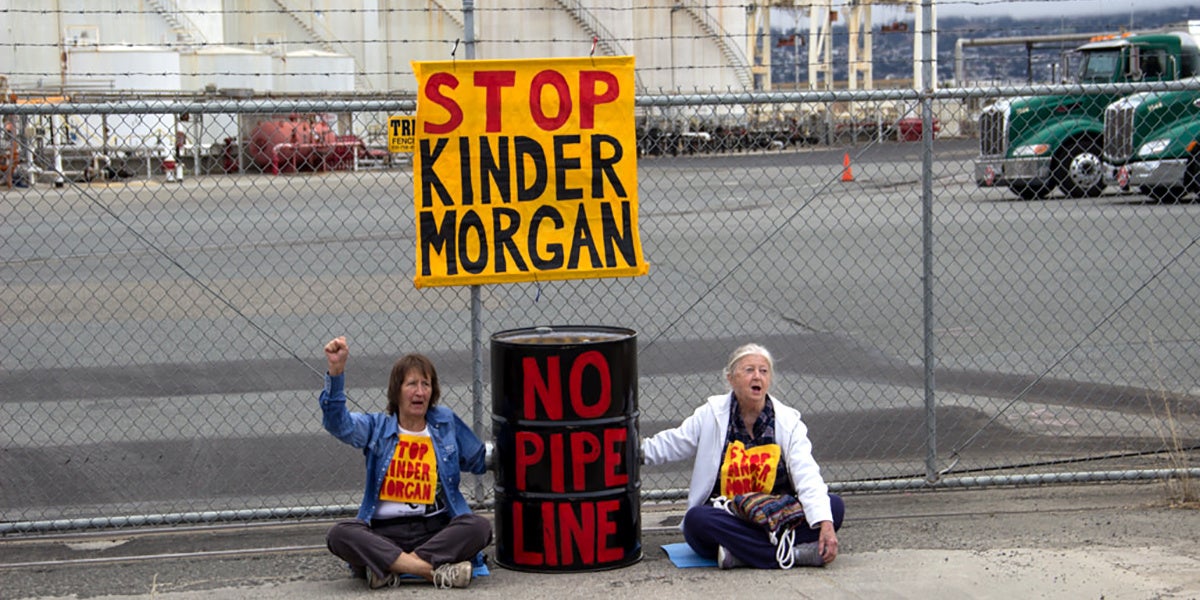 “This is a sign that organizing works, and it could well be the beginning of the end for this dangerous pipeline,” declared Clayton Thomas-Muller, a Stop-it-at-the-Source campaigner with 350.org.

In the company’s statement announcing the move, chairman and CEO Steve Kean said Kinder Morgan was suspending “all non-essential activities and related spending” as a result of the “current environment” that puts shareholders at risk.

“A company cannot resolve differences between governments,” he added, referencing resistance from BC lawmakers that is at odds with support for the project coming from Ottawa and neighboring Alberta. “While we have succeeded in all legal challenges to date, a company cannot litigate its way to an in-service pipeline amidst jurisdictional differences between governments,” Kean said.

Unless legal agreements are reached by May 31, Kean said that “it is difficult to conceive of any scenario in which we would proceed with the project.” (There are still 18 pending court cases that could thwart the project, the Wilderness Committee noted.)

BC Premier John Horgan, for his part, said in a statement Sunday, “The federal process failed to consider BC’s interests and the risk to our province. We joined the federal challenge, started by others, to make that point.”

“We believe we need to grow the economy, while protecting the environment. We want to work to address these challenges together. But we will always stand up for British Columbians, our environment, and the thousands of jobs that depend on our coast.”

Stopping the fossil fuel project, though would reap benefits beyond the two provinces the pipeline runs through, as author and climate campaigner Bill McKibben noted:

Odd to watch Alberta fighting with Ottawa fighting with BC, as if the interests of a) First Nations and b) Planet Earth are not also–indeed mostly–on the line. Carbon doesn't stop at provincial or national borders #StopKM

As such, apart from Horgan’s pushback, the project has faced fierce and sustained opposition from a range of groups who demand the rights of land, water, indigenous groups and others trump those of Big Oil.

Grand Chief Stewart Phillip of Coast Protectors said that “after some long hours in the boardroom,” Kinder Morgan came “to the inevitable conclusion that that you simply can’t ram a pipeline through in the face of such opposition—legal, political, on-the-ground opposition. It’s impossible.”

Investors should note that the opposition to this project is strong, deep and gets bigger by the day. This announcement shows that this widespread opposition has reached critical mass. British Columbians’ desire to protect clean water, safeguard the environment and stand behind Indigenous communities cannot be ignored or swept under the rug. We encourage Kinder Morgan to shelve this project before the litany of lawsuits, crumbling economics, and growing resistance against the pipeline does it for them.

While the company “looks ready to pack it in,” said Wilderness Committee Climate Campaigner Peter McCartney, the opposition is “not going anywhere until this pipeline no longer poses a threat to the coast, the climate, and Indigenous communities along the route.”

Despite such threats, Ottawa and Alberta Premier Rachel Notley are still aggressively pushing for the project.

“This pipeline must be built,” Notley declared Sunday, and threatened legal action “to impose serious economic consequences on B.C. if its government continues on its present course.” She added that her province “is prepared to be an investor in the pipeline.”

Trudeau—who’s touted his country’s “unwavering … commitment to fight climate change”—said on Twitter, “Canada is a country of the rule of law, and the federal government will act in the national interest. Access to world markets for Canadian resources is a core national interest. The Trans Mountain expansion will be built.”

Thomas-Muller, however, said that “Kinder Morgan’s investors have seen that people all across Canada are choosing Indigenous rights, clean water, and a safe climate over this dangerous pipeline. Now it’s time for Justin Trudeau to do the same.”