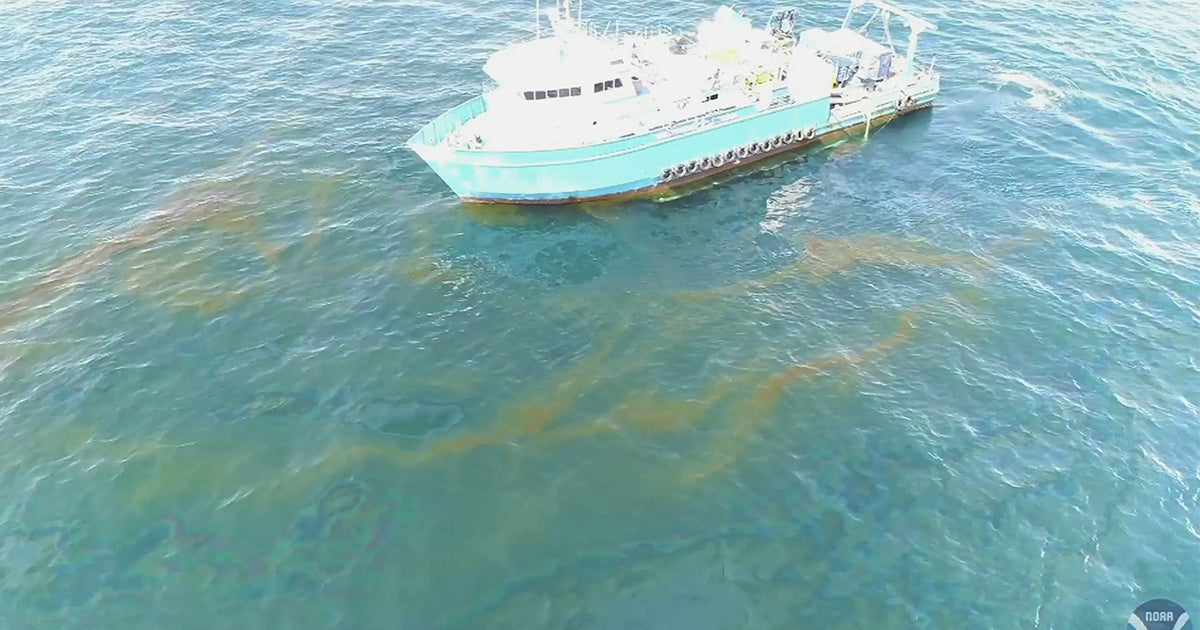 A NOAA research vessel at a Taylor Energy production site in the Gulf of Mexico in September 2018. NOAA

The federal government is looking into the details from the longest running oil spill in U.S. history, and it’s looking far worse than the oil rig owner let on, as The New York Times reported.

The oil spill in the Gulf of Mexico received little public attention when it happened in September 2004, but it has been steadily leaking as much as 4,500 gallons a day, not three or four gallons per day as Taylor Energy Company, the rig owner, claimed, according to a new study by the National Oceanic and Atmospheric Administration (NOAA). And that’s a conservative estimate, the report said.

Oil and gas have been seeping out of the leak that started 12 miles off the Louisiana coast when an underwater mudslide caused pipes to rupture and a production platform to sink during Hurricane Ivan. Taylor successfully capped nine wells, but said it couldn’t cap 16.

Taylor Energy Company, which sold its assets in 2008, estimated that the leak has been minimal based on oil sheen on the surface of the water. The company argued that between 2.4 to four gallons of oil dribble out per day when it asked a federal court to release it from a cleanup order. The company’s executives asserted that oil plumes from the sea floor are from oil-soaked sediment around the sunken platform and that any rising gas is from living organisms, according to The New York Times.

“The results of this study contradict these conclusions,” the report, issued on Monday by NOAA and Florida State University, concluded.

In fact, the researchers directly refuted the sediment claim, stating that since the oil is only mildly biodegraded it cannot be from built-up sediment, as the AP reported.

“While it is feasible that the heavily oiled sediments in and around the erosional pit could be contributing to oil in the water column, the chemical nature and volume of oil and gas measured precludes sediments from currently being the major source of oil to the marine environment,” the report says.

Using sonar technology and a newly developed “bubblometer” — a tool for analyzing oil and gas bubbles rising through the water — the researchers determined that the plumes stem from oil and gas from several wells. They also estimated that as many as 108 barrels of oil, or just over 4,500 gallons, have spilled into the Gulf daily since the underwater mudslide, as The New York Times reported.

Taylor Energy issued a statement that it wants “verifiable scientific data about the leak and a scientifically and environmentally sound solution,” according to the AP. The company has also said that since the uncapped pipes are buried under so much oily and treacherous silt, stopping any leaks would do more environmental damage than letting them be.

The NOAA report comes out just as the Trump administration wants to open the entire U.S. coastline to drilling and plans to rollback safety regulations put in place after the 2010 Deepwater Horizon explosion in the Gulf of Mexico.

“This is an unresolved, ongoing leak 14 years later,” said Daniel Jacobs, author of BP Blowout: Inside the Gulf Oil Disaster, as The New York Times reported. “This is yet another indication that we are not ready to expand offshore drilling.”