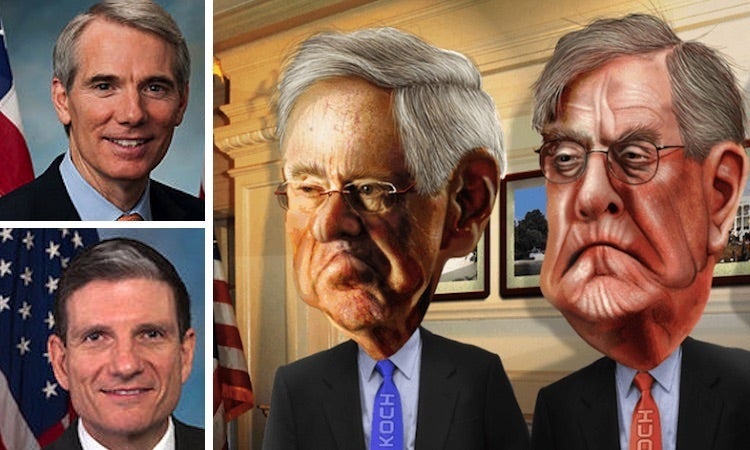 Billionaire oil barons Charles and David Koch are reaching into their deep pockets to fund Republican candidates in the tight Senate races in Ohio and Nevada, two states that have seen powerful political and corporate interests block progress in renewable energy. 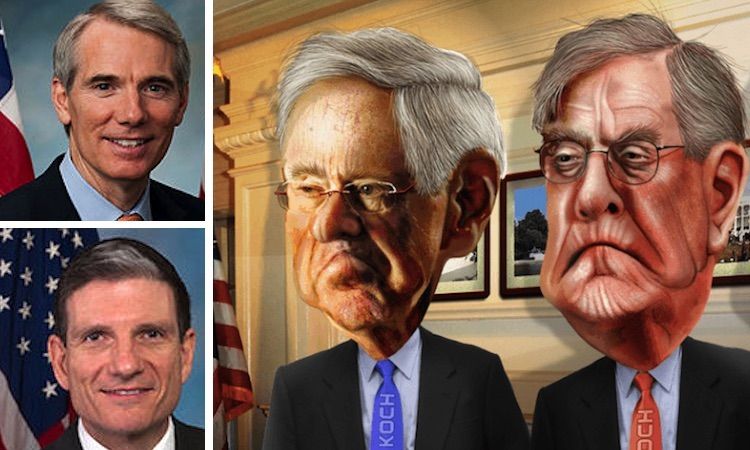 According to NBC News, the Koch Super PAC Freedom Partners Action Fund has announced it will buy $2.7 million television and digital ads to help Ohio Republican incumbent Sen. Rob Portman defeat Democrat Ted Strickland in the key swing state. The candidates are currently locked in a dead heat with each polling at 42 percent.

The Koch brothers have notoriously dumped wild sums of money on conservative causes and campaigns, with more than $88 million in traceable funding to groups attacking climate change science, policy and regulation. According to NBC News, the two latest $3.7 million ad buy brings the Super PAC’s spending to $19.3 million in an effort to control the Senate.

So who are the Koch-approved Senate choices for Ohio on Nevada?

Rob Portman, who has been in office since 2011, is a pro-business conservative who has a prominent track record of choosing fossil fuel interests over environmental protection. As Cinncinati.com reported, he was a vocal opponent to the Obama administration’s regulations to reduce carbon dioxide emissions from power plants and has introduced an amendment that would let states opt out of those clean power rules.

While he doesn’t completely deny global warming, he has played the “not a scientist” card when it comes to whether or not human activity causes climate change, saying, “I’m not going to quantify it because scientists have a lot of different views on that.” In March 2015, when Democrats tried to pass an amendment that specified that human action contributed “significantly” to climate change, Portman voted no because of the single word, “significantly.”

And, if this tells you anything, George W. Bush will stump for Portman later this summer and Portman’s name has been floated as a potential VP pick for Donald Trump (FYI: Portman isn’t interested in running with Trump, who the Kochs have basically rejected).

The Sierra Club’s Ohio branch observed that “over the course of his career, Portman has received more than $1.7 million from the energy and natural resources sector, including $761,000 from oil and gas, according to the Center for Responsive Politics. Marathon Petroleum, FirstEnergy and American Electric Power were among his Top 20 contributors in 2013-14.”

The Koch’s non-profit foundation Americans for Prosperity has given Portman an 89 percent score for 2015-16 for his support of Senate Joint Resolution 24 to disapprove of President Obama’s Clean Power Plan, a plan supported by over two-thirds of Ohioans, the Sierra Club said.

The League of Conversation Voters (LCV) on the other hand has given Portman a mere 8 percent for 2015 for his anti-environment voting record on the LCV’s National Environmental Scorecard. He has a lifetime score of 20 percent.

As for Joe Heck, who has represented Nevada’s 3rd congressional district since 2011, the LCV has given him a terrible lifetime score of just 8 percent and a lower score of 6 percent for the year 2015. The group has even named Heck as the first member of its trademark Dirty Dozen program for the 2016 cycle.

“Joe Heck is a poster child for the Dirty Dozen, a climate change denier who would rather fight the expansion of clean renewable energy than protect the health of our families,” said Nevada Conservation League executive director Andy Maggi. “Nevadans know how critical it is that our next senator prioritize protecting our clean air and water and help make Nevada a solar energy leader, and Joe Heck just doesn’t fit the bill—he would rather represent big polluters, no surprise when they have funded his campaigns to the tune of over $400,000 dollars.”

You’d think that Nevada, which enjoys nearly 300 days of sunshine, would lead states on solar energy generation. However, in December 2015, the Republican-appointed Public Utilities Commission overhauled a net-metering program in favor of the state’s utilities (such as Warren Buffett‘s NV Energy) and effectively killed Nevada’s rooftop solar industry. Solar providers SolarCity and Sunrun Inc. have since left the state.

The Americans for Prosperity have rated Heck with a 77 percent lifetime score and a current score of 85 percent.

Additionally, NBC News reported that the Koch’s Super PAC is now aiding Florida’s Sen. Marco Rubio‘s reelection campaign and has reserved television airtime beginning Aug. 31. As it happens, the Koch brothers are leading the efforts to stifle solar energy in Florida as well.