A Response to ‘Lunatic Farmer’ Joel Salatin on His Climate Denial 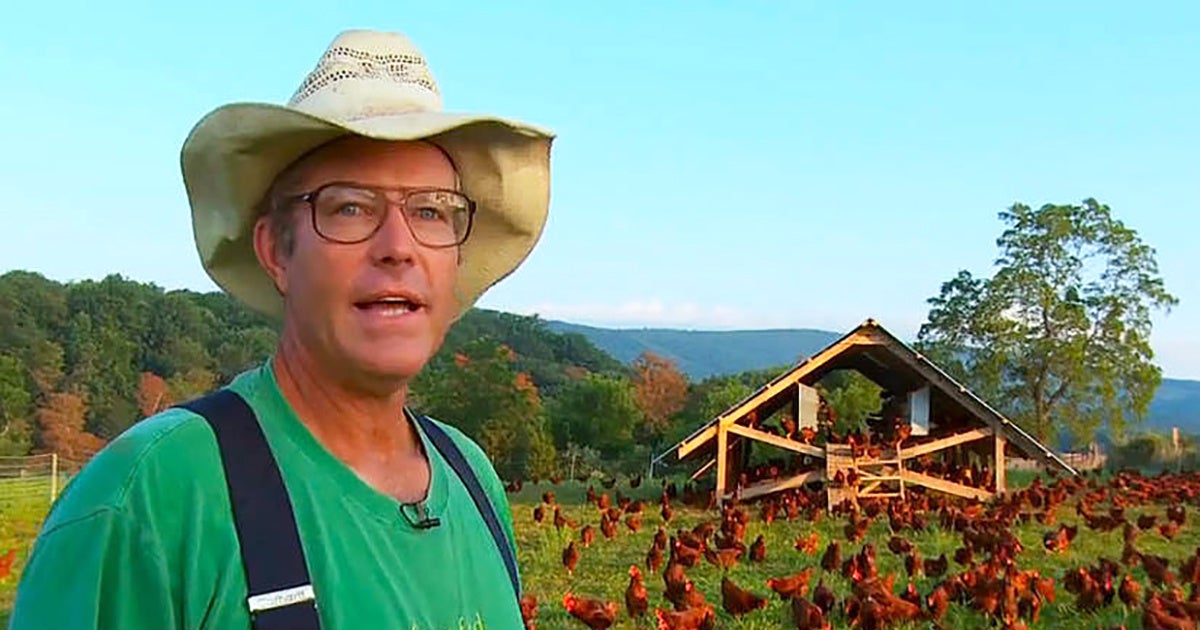 So a couple of weeks ago I wrote a story for DeSmog reporting on self-described “lunatic farmer” Joel Salatin’s views about climate change and how he thought it might not be caused by humans.

There’s been quite a reaction to the story, mainly through Facebook discussions sparked by Salatin himself and by others who are part of what you might broadly describe as the sustainable farming movement (this is an entirely imperfect term though, given the diversity of thought among the great many people looking for alternative ways to grow healthy food in a way that has less impact on the environment).

I’ve been accused by one Australian figure, Tammi Jonas, the interim president of the Australian Food Sovereignty Alliance, of writing an “unproductive and divisive” article that was “pure click bait ‘gotcha’ rubbish.” More on that in a bit.

Salatin penned a long response on his Polyface farms Facebook page that was liked almost 3,000 times and shared 1,000 times more.

So I thought I should go over some of the responses and clear a few things up.

Salatin describes himself as a “Christian libertarian environmentalist capitalist lunatic.”

He’s a high-profile figure, has appeared in multiple documentary films, written books and is an oft-invited speaker. He’s been featured in Time magazine and inspired many people to change how they work on the land.

All want to learn more about the work on his Polyface farm in Virginia, where he uses a mix of useful modern tech (electrified fencing, for example) and livestock movements to mimic natural processes and enrich his soil and pasture without needing to load it up with artificial chemicals and fertilizers (that, again, is a very short summary of what he does, and some might be unhappy with it). He is a big advocate for having localized food systems. For that and more, many people are rightly thankful for his work.

In late June, Salatin appeared at a “Red Pill Expo” in Montana alongside some characters with what you might politely call unconventional views (the twin towers in the 9/11 attacks came down because of a controlled explosion, climate change is a hoax and other such conspiratorial rubbish).

I wrote a story about that, and given I knew about Salatin’s status I wanted to know why he had agreed to appear.

Given I write a lot about climate science (it’s a lot of my beat), I asked him some questions about his views on climate change.

Salatin’s response came in after the first story had been published, so I wrote a follow-up.

In short, Salatin told me he thought scientists might be wrong that humans are causing climate change—a position that puts him at odds with pretty much every major scientific institution in the world, not to mention the actual evidence in the scientific literature.

I put Salatin’s claims to several climate scientists and asked people in the sustainable food movement about his views, and then published a story about it. Pretty straight forward really.

Nowhere in the story did anyone challenge the legitimacy of his methods on the farm.

Clearly, his views on climate science are seperate, as the story pointed out.

But this was a story not only because Salatin had shared a platform with conspiracy theorists, but also that he is a high-profile individual who is in a position to reach and influence large numbers of people (as he has done with his advocacy for his own farming methods).

Salatin published a response (you should read it), where he described “venomous vitriolic vituperative invectives” coming at him “from a blog regarding climate change and asserting that I’m a classic climate change denier.”

In his response, Salatin seemed to want to undermine the credibility of the story by ignoring how criticism of his position was not coming from me, but from several respected climate scientists.

Those critics are no lightweights. It was Prof. Stefan Rahmstorf, of the Potsdam Institute for Climate Impact Research, who said Salatin was repeating “standard denier talking points.”

Rahmstorf went to great lengths to deconstruct Salatin’s throwaway line that because “Greenland was once named that because it was a pastoral, hospitable place to live,” this somehow showed the current threat from human-caused climate change might not be real.

“There is no evidence that Greenland was any ‘greener’ or had substantially less ice during Viking times than now, or for that matter in the first half of the 20th century before global warming really took off,” Rahmstorf told me.

It was Prof. Andy Pitman, director of the Australian Research Council Center of Excellence for Climate System Science, who pointed out Salatin’s claim that a few decades ago we were “inundated with the science that by now, we would enter a new ice age” was another classic denier myth.

Pitman also pointed out Salatin’s claim that “science is limited to what we can observe and what we can duplicate” was also false.

Because Salatin did not link to my original story, or explain to his followers that it was actually not “a blog” criticizing him but several leading climate scientists, this gave his audience a selective and partial version of the story.

Nor did Salatin actually respond to any of the criticisms of his views, but instead took the opportunity to criticize scientists, based on his own experience with those working in agricultural science and other related fields. He wrote:

“[Scientists have] been grossly wrong as many times as perfectly right. Each of these oops orthodoxies included a minority view of heretics who were eventually exonerated in the process of time. Farmers learn patience.”

He seems to have transposed his distrust of scientists in one field, into another entirely different field. This, to me, is like being skeptical of brain surgeons because you once met a dodgy animal vet.

One commenter wrote: “Joel, I’ve been following you for years. You even inspired me to start my own small livestock farm. But you lose me completely when you start equating climate science with pasteurization and industrial animal husbandry. Really? It’s just sad if you see equivalency there.”

Perhaps because it fits with his libertarian politics of individualism, Salatin offered a laundry list of things which people would not be doing if they “really, really, seriously thought their actions today, right now, were causing climate change.”

I wonder if Salatin extends his accusation of a lack of conviction on climate change to all the people who fly him across North America and the rest of the world to have him speak (he’s been to Australia eight times)?

One commenter wrote to Salatin: “Your argument seems to be (1) Since most people don’t take drastic actions to reduce climate change, they don’t really believe it. (2) Since most people don’t really believe it, it isn’t true. Both components are erroneous. First, many people belive [sic] that eating junk food, or smoking, or leading sedentary lives is bad for their health, yet do it anyway. Jumping from belief to action is very hard, especially when consequences are somewhere far in the future. Second, facts don’t depend on whether anyone believes in them.”

“You see, folks, what we do says a lot more about our convictions than what we say, what we sign, or at whom we yell.”

Fellow Guardian blogger Martin Lukacs has written an excellent critique of this idea that we should all be more concerned with our personal actions than those of governments or corporations (as is often the case, I personally think you have to balance both and suspect Salatin might think the same).

Lukacs argues a great victory of the prevailing neoliberal politics is to shift the blame and guilt for the world’s problems away from governments and corporations to individuals.

“While we busy ourselves greening our personal lives, fossil fuel corporations are rendering these efforts irrelevant,” writes Lukacs. You should read it.

Now onto some other criticism.

My story, according to a Facebook comment from Tammi Jonas, was “pure click bait ‘gotcha’ rubbish.” It should be said I tried to contact Jonas for comment, as she has hosted Salatin in Australia before. I left voicemail messages and sent a text but by the time she responded, the story was live. Coincidentally, she told me a reason she was in intermittent contact was that she was actually at Polyface farms with Salatin at the time.

I’ve since had a long conversation with Jonas over the phone. She still contends my story was “not productive” and that Salatin’s views on climate science shouldn’t matter. She says he doesn’t speak about it publicly anyway. She thinks I shouldn’t have written the story, but also accepts that Salatin should not be beyond criticism.

Many other commentators either refused to accept that Salatin was “a denier,” or attacked my story for not covering in detail all the other good stuff that Salatin has done.

But does it matter if Salatin refuses to accept the evidence for human-caused climate change?

As Dr. Nick Rose, executive director of Sustain: The Australian Food Network and a lecturer on food systems at William Angliss Institute in Australia, wrote in one Facebook comment:

“Why should he be immune from being held up to scrutiny – why does his hero farmer status mean that his views should not be publicly discussed? This discussion is not about damaging his reputation as a farmer. It is about warning about the dangers of putting people up on pedestals and working out for ourselves, as a movement, after critical and careful reflection, what our values and principles need to be.”

“Anti-climate science perspectives are getting a good deal of air time in these responses, as are comments about single mothers & people on welfare. In other words, his comments have added fuel to a very ugly fire burning in USpolitics right now. So words themselves can be as important as deeds when they promote contempt.”

There was some especially insightful and lively commentary on the Facebook page of social entrepreneur Robert Pekin.

Pekin carries the awesome job title of CiEiO at Food Connect, a leading community-assisted agriculture business in Brisbane (I’ve written about Robert and have met him many times and, I think, we’ve probably shared beers on a few occasions some years ago. For what it’s worth, I think he’s a fantastic bloke, but I disagree with his view that Salatin had offered any kind of “rebuttal” to the substantiveness of the original story).

Russ Grayson, a Sydney-based independent journalist with a specialism in permaculture and food security, wrote a blog post on the reactions to the story. Here’s a bit of that:

“What we have here among regenerative agriculture practitioners and supporters in Australia, though, is cognitive dissonance over Salatin’s social/political/religious attitudes and his farming system. People recognise the value of his farming system but his attitudes are out of synch with those of many in that movement in Australia.
There is a second disconnect, too. It is Salatin’s adopting an approach to farming that would form part of any larger strategy to ameliorate the worse impacts of a changing climate while being a climate change denier. It is understandable that some see this as a glaring contradiction.”

So this is the bit where I’m supposed to offer some neat little concluding paragraph that pulls all these threads together.

Well, you’re not going to get one.