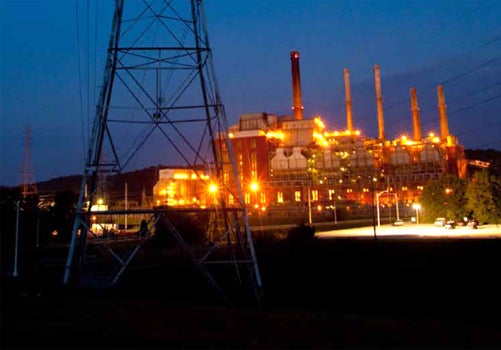 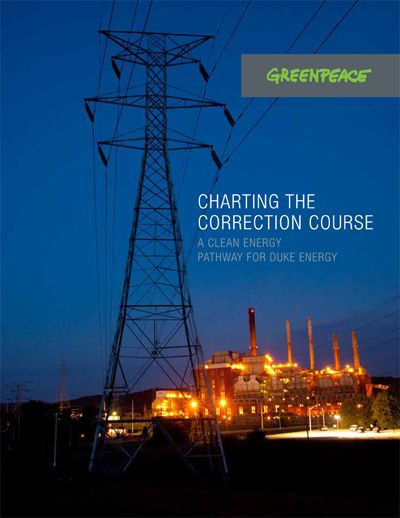 Today Greenpeace released Charting the Correction Course: A Clean Energy Pathway for Duke Energy. Using modeling performed by Ventyx, an energy consultancy, the report details how Duke Energy can save their customers $108 billion over 20 years by investing in renewable energy and energy efficiency.

“Jim Rogers claims that Duke is a green utility, but the company continues to invest in dirty coal and deteriorating nuclear plants, all while raising rates for customers. His rhetoric doesn’t match the company’s reality,” said Mike Johnson, report author and senior analyst for Greenpeace.

Under Duke’s current plan, the majority of energy generated in North and South Carolina over the next 20 years will be sourced from 70-year-old coal plants and risky nuclear plants. Additionally, Duke will be expanding its natural gas fleet, thereby doubling the company’s exposure to volatile natural gas prices. At the same time Duke Energy will quadruple electricity rates in the Carolinas within ten years, and increase them by nearly 20-fold by 2032 in order to pay for the company’s proposed construction.

The Greenpeace plan highlights specific changes Duke Energy can make to benefit ratepayers, the environment and investors. According to Charting the Correction Course, Duke could source 33 percent of its electricity from wind, solar and efficiency resources while saving ratepayers 57 percent on their bills over the next 20  years. The clean energy pathway proposed in the report would also reduce long-term debt for the company by 75 percent when compared to Duke’s current plans.

“It’s a win, win,” said Johnson. “Duke and their ratepayers save money while pollution is significantly reduced. This means better air quality and ultimately better health. By implementing a clean energy pathway, Duke has a chance to be the leader that Jim Rogers claims to be.”

If Duke took the suggested steps it would reduce its global warming pollution by 29 percent, acid rain pollution by 61 percent and smog-causing pollution by 47 percent. This includes 141 million tons of carbon dioxide, nearly 143,000 tons of sulfur dioxide and more than 114,000 tons of nitrogen oxides.