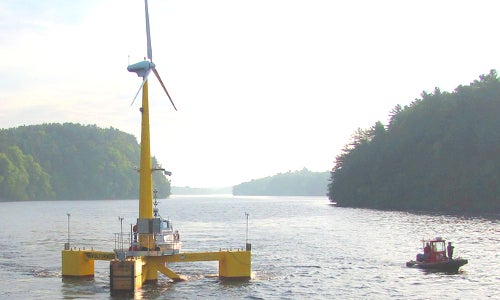 A consortium in Maine is all about delivering competitive, offshore wind power in the 2020s, and this week marks a large step in that direction.

According to the Bangor Daily News Maine (BDN), the Maine Public Utilities Commission approved a pilot project for offshore wind energy led by Maine Aqua Ventus, a group that consists of Emera, Cianbro Corp. and Maine Prime Technologies LLC, which represents the University of Maine.

Pilot approval puts Maine Aqua Ventus in position to compete for a $47 million grant from the U.S. Department of Energy, which is expected to be awarded in May to an entity that can some day create large wind farms that will produce competitive electricity and provide jobs. Maine Aqua Ventus’s pilot project is to place two, six-megawatt (MW) turbines off Monhegan Island by 2016.

The consortium eventually hopes to operate a 500-MW offshore farm in the Gulf of Maine.

“There’s 150 gigawatts of offshore wind off of our coast, enough to power the state of Maine 70 times over,” said Habib Dagher, director of the Advanced Structures and Composites Center at the University of Maine. “So, it’s our largest resource and we’re making an investment today to figure out how to harvest this resource for future generations. 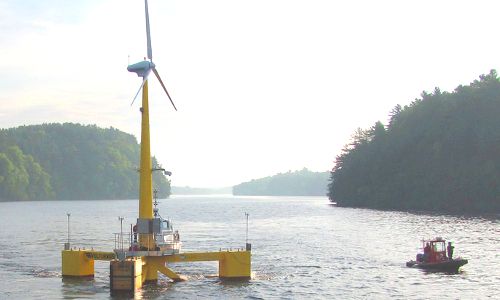 The University of Maine has been studying floating turbines with its “VolturnUS” since last June. Photo credit: Aqua Ventus Maine

The team behind the project made progress long before Tuesday’s approval. The University of Maine’s 57-foot VolturnUS became the first offshore turbine in the U.S. to send electricity to the grid from Castine, ME in June. The 20-kilowatt generator and tower is just one-eighth of the size of the turbines the university plans to place in the Gulf of Maine by 2016.

The long-term, 500-MW farm’s cost is an estimated $1.8 billion. With that in mind, Mark Vannoy was the only Maine commissioner to vote against the pilot project. He estimates the ratepayer subsidy would cost between $8 million and $10 million. However, the farm could generate $300 million annually, according to The Portland Press Herald.

The Earth Policy Institute thinks the pilot project will be among the first collections of offshore turbines in the U.S. The developers of a larger project in Cape Cod, MA signed a contract with Siemens for 130 turbines.

Maine Aqua Ventus will invest $120 into the pilot project. The group plans to sell 43,000 MW hours per year to Central Maine Power Co. from its two turbines at 23 cents per kilowatt hour, but that price is expected to drop dramatically over time.

“When you bought laptops six or seven years ago, your laptop cost $5,000 or more … and today you can buy it for a tenth that cost,” Dagher said. “Why is that? Because the industry has scaled up. And we’re no different.

“In this industry, by scaling up the technology from the research labs into a demonstration and then a full-scale project, that’s where the costs are going to drop. Our goal is to be competitive with other forms of electricity in the 2020s.”