Father and Daughter Linked by Passion for Clean Water 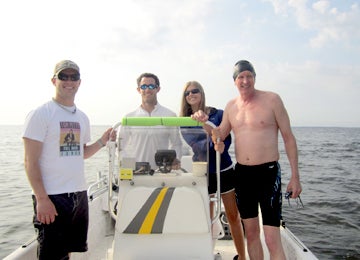 Steve and Lauren Wargo are uniquely linked, not only are they father and daughter, but they both have a passion for clear water. Steve is a marathon open water swimmer from Cleveland, OH and Lauren is the Riverkeeper for the Neuse Riverkeeper Foundation in New Bern, NC.

This summer, Steve completed an epic marathon swim of 24.3 miles across Lake Erie from Long Point, Ontario in Canada to North East, PA in U.S. Steve became the sixteenth person to complete the swim and set the record for being the first Ohioan and eldest person at age 55. 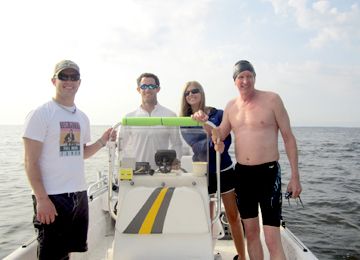 “I logged many hours swimming in Lake Erie preparing for this swim, so the water quality is of great importance to me,” said Steve.  The bacteria alerts caused by E. coli create some of the worst conditions nationwide along the Lake Erie shoreline. In August, there were 24 days where Headlands Beach State Park in Northeastern Ohio posted a contamination advisory when E. coil samples were greater than 235 parts per million. It’s not uncommon for an advisory to be posted after a significant rainfall as the old sewer system overflows and dumps raw sewage into the lake.

Lauren embarked on a new position as the Neuse Riverkeeper this summer after graduating from Miami University with an environmental science and botany degree. Lauren is responsible for advocacy for the entire Neuse River Basin. She works to develop programs that foster and sustain stewardship and conservation in one the nation’s most unique ecosystems.

“Growing up along the shores of Lake Erie was eye opening to me when it came to learning about water and natural resources,” said Lauren. “Lake Erie is arguably the most threatened Great Lake because of its relatively small water volume. I’ve always felt an instinctive bond between my spirit and the natural world around me. Like dad, I grew up loving the water, particularly it’s recreational and aesthetic value. Water conditions can make or break the state of an ecosystem, and also have far reaching effects seen in local economies. Clean water is purifying, cleansing and pertinent for thriving ecosystems and communities.”

“I am so proud of Lauren and the work that she is doing. Lauren possesses a combination of passion for the environment and skill set to influence groups impacting the river. I know Lauren along with the committed members of the Neuse Riverkeeper Foundation are going to make a difference for the future of the river,” Steve said.

Father and Daughter agree that our fresh water is not an invulnerable resource. Public and private entities need to work together to protect and clean up our waterways.