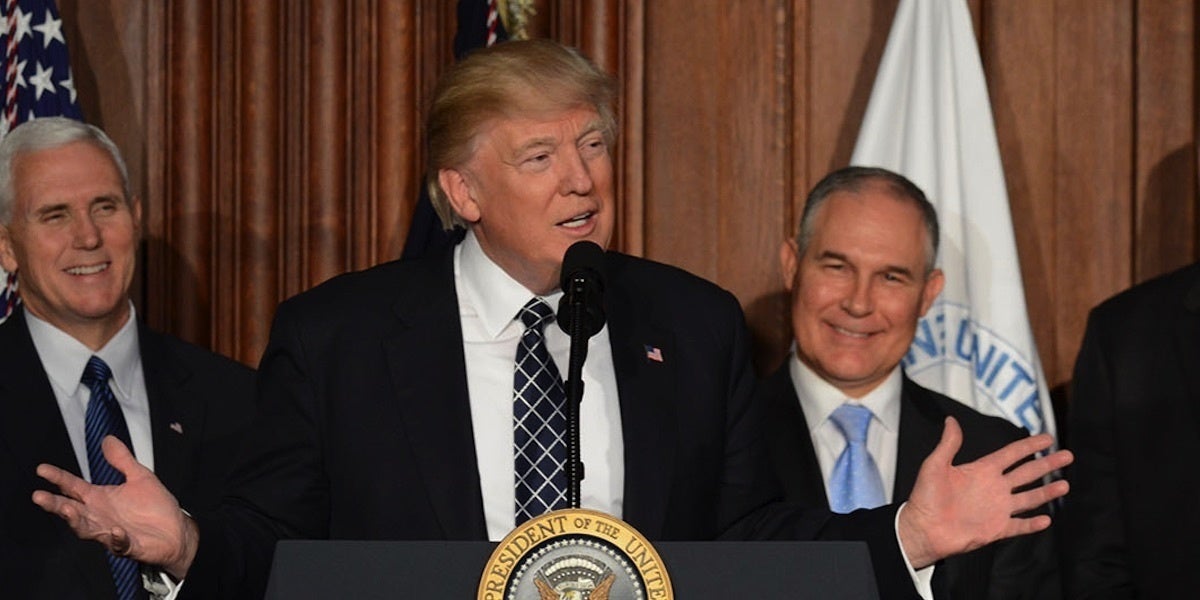 An event for the Energy Independence Executive Order, which calls for a review of the Clean Power Plan. U.S. Department of the Interior

“A strong enforcement program is essential to achieving positive health and environmental outcomes,” Susan Bodine, head of the agency’s enforcement division said in a statement.

However, analyses show that the penalties against polluters are significantly lower under President Trump‘s EPA. According to The Hill, that $1.6 billion figure is roughly a fifth of the $5.7 billion in penalties collected the year before under President Obama’s EPA.

In addition to that, the Scott Pruitt-led agency is also taking credit for the previous administration’s enforcement efforts. The EPA 2017 enforcement report covers the federal fiscal year from Oct. 1, 2016 to Sept. 30, 2017, meaning the final tally covers three and half months of the Obama administration, “when some of the E.P.A.’s biggest cases were settled,” as the New York Times observed.

The largest chunk came from Volkswagen’s $1.45 billion to resolve civil claims for its “dieselgate” emissions scandal, which was announced on Jan. 11—before Trump was even sworn in.

Steven Chester, the deputy assistant administrator in EPA’s compliance office from 2011 to 2014 told The Hill that he is concerned about the drop in litigation and enforcement and its consequences for the environment.

“My big concern is that if there isn’t a viable threat of litigation and enforcement, if there aren’t an appropriate number of lawsuits or complaints brought, that you lose that deterrent effect—and if you rely too heavily on compliance assistance you are going to end up with more non-compliance,” he said.

Chester said that the most noticeable change in the 2017 enforcement report was the drop in the EPA’s recommendations to the Justice Department (DOJ) to prosecute polluters, from 152 the year before to 110 now.