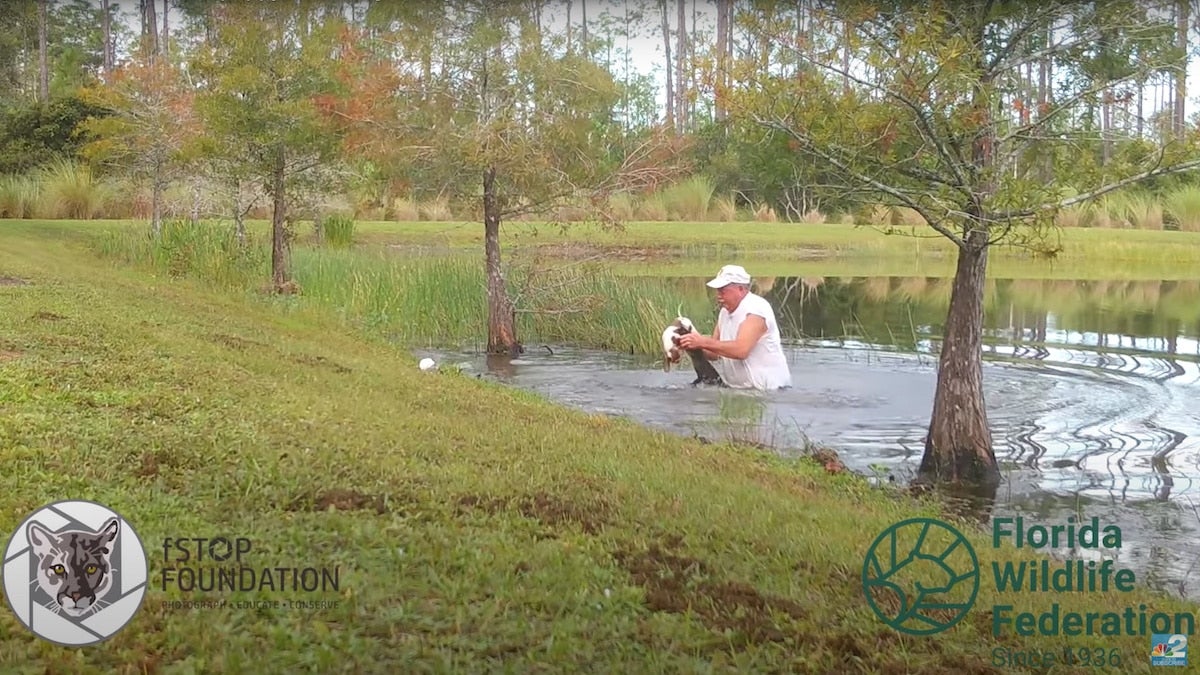 In a dramatic rescue captured on camera, a Florida man ran into a pond and pried open an alligator’s mouth in order to rescue his beloved puppy, all without dropping his cigar.

The protagonist of the video is 74-year-old Richard Wilbanks of Estero, Florida, who risked his hands in order to save his three-month old Cavalier King Charles spaniel named Gunner from the jaws of an almost four-foot alligator.

“It was like a missile,” Willbanks told the Fort Myers News-Press of the alligator. “We were only about 3 feet away from it, but it struck like a snake. It had Gunner in a vise grip and I just rushed in.”

Wilbanks told CNN that grabbing a hold of the gator was the easy part. The hard part was prying its jaws open. After Wilbanks managed to free Gunner, the alligator then bit down on his hands, the Fort Myers News-Press reported.

“He had one little puncture wound, and… my hands were just chewed up,” Wilbanks told WINK.

After tending to his hands, Wilbanks rushed Gunner to the animal hospital, where he was treated for a puncture wound, the Fort-Myers News Press reported. However, he has now fully recovered.

Wilbanks has learned from the incident. He has bought Gunner a new leash, and plans to keep him at least 10 feet from the pond at all times.

He has “a new leash on life,” Wilbanks told the Fort Myers News-Press.

Education is also the reason that footage of the rescue was made public. Wilbanks’ property borders a nature reserve, and a partnership between the Florida Wildlife Federation (FWF) and the fSTOP Foundation put cameras in the area to monitor wildlife. All told, there are 17 cameras in 15 backyards in Estero.

The purpose of the project, called Sharing the Landscape, is to teach residents how to live safely and respectfully with wild animals.

The project decided to share the video of the rescue, which was captured late in October, in order to prevent similar incidents from happening in the future.

“If we understand how to deal with them [wildlife], how to interact with them. The outcome is always positive,” William Freund of the fSTOP Foundation told NBC2.

Wilbanks and his wife Louise have loved living so close to nature, and their close call hasn’t changed their point of view. Willbanks told WINK he did not call the Florida Fish and Wildlife Conservation Commission (FWC) because he understood that the alligator was just doing what he needed to do to survive.

“It gives us a new appreciation,” Louise told WINK. “We do need to be aware they are wild animals. They’re not here for our benefit. We’re very lucky to share this space with them.”

Wilbanks told the Fort Myers News-Press that the alligator was still swimming in the pond.

FWC told WINK that alligators rarely cause serious injuries in Florida, but that pet owners should take proper precautions.

“We encourage everyone to take precautionary measures, particularly those who live or recreate near the water. Dogs and cats are similar in size to the natural prey of alligators,” the FWC said in a statement.