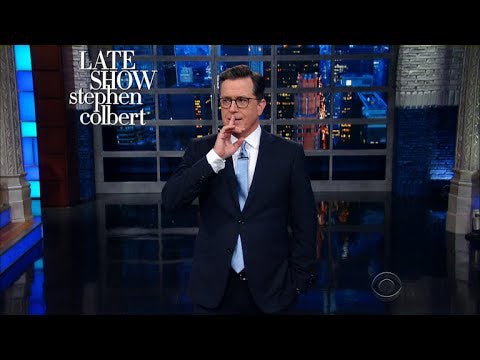 Leave it to Stephen Colbert to make sure he mixes in some “lighter news” during his evening monologue on The Late Show. “The world is burning,” Colbert begins. “The New York Times just published a report on the drastic impact of climate change on the U.S.,” Colbert continued. “‘Evidence for a changing climate abounds, from the top of the atmosphere to the depths of the oceans’ and ‘Americans are feeling the effects of climate change right now,'” Colbert read from Times report.

And, if you don’t think that’s daunting enough, Colbert makes sure you understand that the Times explains that the 600-page document is “an unreleased, as yet unapproved government report, but it was released and leaked, because the Times said, out of ‘fear the Trump administration could change or suppress the report.‘”

If all this information is too much to digest, Colbert helps out by showing a 4-second video summary.

Colbert also hits on other alarming news, including the memo that was released Monday by the U.S. Department of Agriculture “instructing staff to avoid using certain teams,” including climate change.

If you’re looking for some comic relief during these egregious times, watch above.