Climate Activists Turn Up the Heat on NY Gov. Cuomo With Sit-In 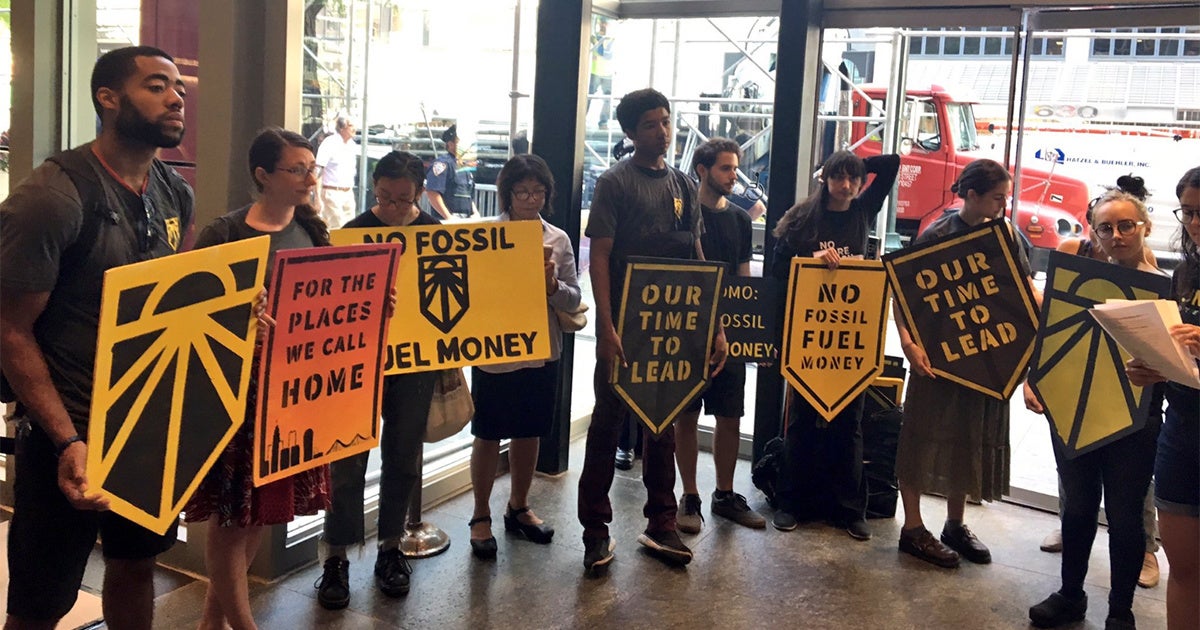 Dozens of young New Yorkers on Wednesday are occupying the Manhattan office of Gov. Andrew Cuomo to demand he reject fossil fuel money.

“We’re here fighting for the people that we love and the places we call home,” said one of the activists with the Sunrise Movement, the youth-led group behind the action.

BREAKING: Dozens of New Yorkers occupy @NYGovCuomo's office to demand he stand with youth on climate justice by signing the #NoFossilFuelMoney Pledge.

This is his last chance to stand with us or we will replace him with someone who will. #HeatWeek pic.twitter.com/gM6RmxMvOt

Specifically, the group is asking Cuomo to sign the “No Fossil Fuel Money” pledge, a vow to “not take contributions from the oil, gas, and coal industry and instead prioritize the health of our families, climate, and democracy over fossil fuel industry profits.”

The New York sit-in is part of the Sunrise Movement’s Heat Week campaign—a slate of actions aimed at confronting “Big Oil’s corruption of our democracy.”

"We're here fighting for the people that we love and the places we call home." We are #youngandvoting Watch our livestream here: https://t.co/a7LGxRG7se pic.twitter.com/oq4Bm7yjpq

“We’ll send a message loud and clear” to politicians, says a call-to-action, “take a stand and drop Big Oil, or we’ll replace you with someone who will.”

The message was also sent to California Gov. Jerry Brown, whose office was the target of a 7-hour sit-in by nearly three dozen people on Tuesday.

Referring to wildfires raging in the state, Bill McKibben hailed the action as “an effort to make sure this isn’t our permanent future.”

We are young people of California, & United States & the world. We are demanding that you, @JerryBrownGov, set a precedent for leaders worldwide by announcing a plan to move California off fossil fuels before you host the Global Climate Action Summit in San Francisco this Sept. pic.twitter.com/9gXS3exGzt

Urging him to seize that last chance, organizers were also pointing constituents to a letter to Brown, which declares, “The stakes of your choice could not be higher. We don’t have to imagine a world ravaged by climate change. It’s here.”

The letter also urges the governor to “set a precedent for leaders worldwide by announcing a plan to move California off fossil fuels before you host the Global Climate Action Summit in San Francisco this September.”

Shout out to the young people of @sunrisemvmt who are using their voices & bodies this #HeatWeek to expose the influence of oil & gas money on our democracy. Our politicians must listen & take action! #NoFossilFuelMoney#ActOnClimate #FossilFuelFree #ClimateJustice pic.twitter.com/UByjTYP5b7

Other lawmakers can expect to feel the heat too—the actions continue through Aug. 11.