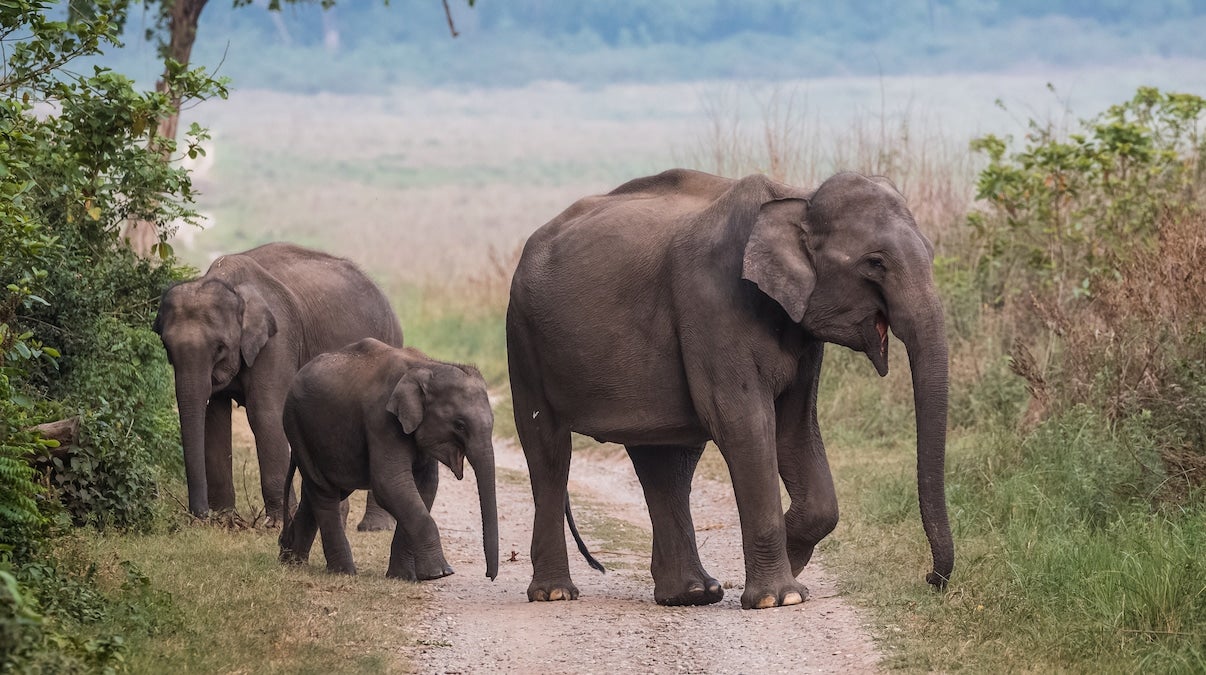 The highly social and endangered Asian elephant (Elephas maximus indicus) lives in matriarch-led groups and, in addition to foods that can be found in the wild like grasses and the roots, bark and leaves of trees, enjoys foods cultivated by humans like rice and bananas, according to the World Wildlife Fund.

Unfortunately, remnants of these and other cultivated foods and their packaging can be found in garbage dumps near where the elephants’ forest habitat meets human communities, where hungry Asian elephants gobble up the food, plastic packaging, utensils and other garbage. The plastics and other human debris is then transported into the forests via the elephants’ dung.

Earlier this year, The Associated Press reported that the consumption of extensive amounts of plastic waste had killed about 20 elephants in Sri Lanka over the past eight years.

“Polythene, food wrappers, plastic, other non-digestibles and water were the only things we could see in the post mortems. The normal food that elephants eat and digest was not evident,” said wildlife veterinarian Nihal Pushpakumara, as The Associated Press reported.

In a new study published in the Journal for Nature Conservation, titled “Plastic ingestion in Asian elephants in the forested landscapes of Uttarakhand, India,” a team of scientists collected dung samples from inside and around forested areas in Uttarakhand, India, and found that the endangered Asian elephants there had been ingesting human garbage, including plastics.

Elephants disperse seeds through their dung, but when their food supply is contaminated with plastic, this natural process transports the ubiquitous and damaging pollutant into wild spaces, endangering the health of the elephants and their forest companions, reported The New York Times.

While working on her Ph.D. at Jawaharlal Nehru University, lead author of the study Dr. Gitanjali Katlam caught elephants ingesting garbage via trail cameras in the state of Uttarakhand in northern India. She and her colleagues, along with ecological research nonprofit the Nature Science Initiative, also collected dung samples.

Plastic was detected in all of the dung close to the dumps and forest near Kotdwar, located near Jim Corbett National Park. Eighty-five percent of the refuse found in the elephant dung collected there was made of plastic, mostly from plastic utensils, food containers, plastic packaging and plastic bags.

Once the plastics are brought into the forest via the elephants’ dung, they may be consumed by other species and fill their stomachs, causing “mechanical damage,” said Carolina Monmany Garzia, who was not involved with the study and works with Agustina Malizia, an independent researcher with the National Scientific and Technical Research Council of Argentina, The New York Times reported.

“It has a cascading effect,” said Katlam, as reported by The New York Times.

With the ingestion of plastics comes the introduction of dangerous chemicals like phthalates, polystyrene and bisphenol A to the digestive systems of the elephants and other animals.

The management of waste by the Indian government, as well as individuals taking the time to make sure that containers don’t contain food waste, are both important to help keep plastic from being ingested by elephants and other animals as often, Katlam pointed out.

“We need to realize and understand how the overuse of plastics is affecting the environment and the organisms that inhabit them,” said Malizia, as The New York Times reported.