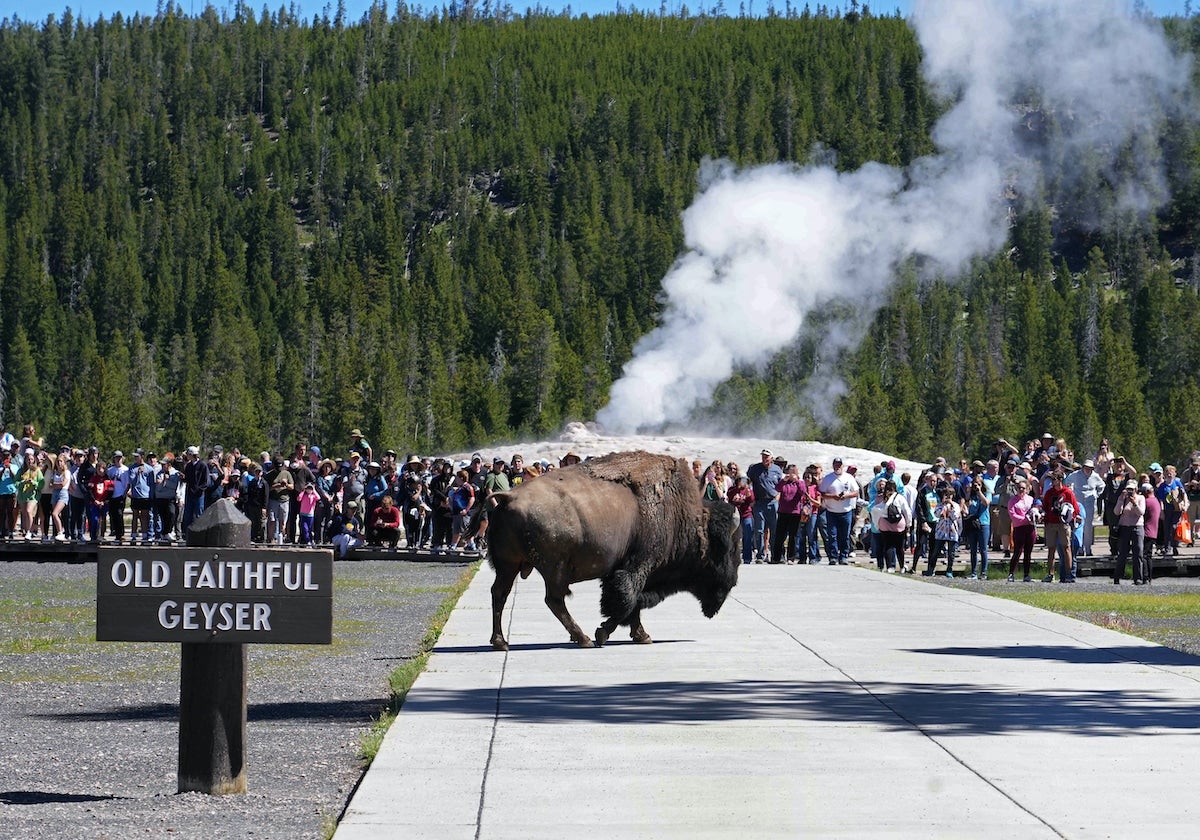 One of the biggest attractions of Yellowstone National Park, which receives more than three million visitors a year, is the wildlife. More than 360 species — including black bears, moose, elk, bighorn sheep, bison, Canada lynx and gray wolves — roam the 3,472 square miles of alpine meadows, sagebrush steppe, grasslands and subalpine forests of the park.

Some of the most popular animals to see at Yellowstone are the bison. The large herbivores live in two subpopulations at the park that fluctuate between 2,300 and 5,000 animals. But be careful, bison can run three times faster than humans, and some bison get annoyed and will charge if you come too close.

People are advised to stay at least 100 yards away from wolves and bears in the park and a minimum of 25 yards away from other animals, including elk and bison, according to the National Park Service (NPS) website.

In an illustration of how dangerous bison can be if humans come too close, a 71-year-old Pennsylvania woman was gored by a bison at the park on Wednesday as she and her daughter were returning to their car at a trailhead near Yellowstone Lake’s Storm Point, reported The Guardian.

They “inadvertently approached the bison… causing the bull bison to charge,” said the NPS, as The Guardian reported.

Just two days before, a 34-year-old man from Colorado was walking with his family near Giant Geyser at Old Faithful when a bull bison charged and ended up goring the man after the family didn’t leave the area.

In a third incident this year, at the end of May, a 25-year-old woman from Ohio was gored after getting within ten feet of a bison. The bison tossed the woman ten feet and she sustained a puncture wound, as well as other injuries, reported CNN.

“Wildlife in Yellowstone National Park are wild and can be dangerous when approached,” warned a NPS news release. “When an animal is near a campsite, trail, boardwalk, parking lot, or in a developed area, give it space.”

According to the U.S. Department of the Interior blog, the mood of a bison can be discerned by its tail.

“When it hangs down and switches naturally, the bison is usually calm. If the tail is standing straight up, watch out! It may be ready to charge. No matter what a bison’s tail is doing, remember that they are unpredictable and can charge at any moment,” the blog said.

The best thing to do if you feel like you’re making an animal nervous by being too close is to create distance.

“If need be, turn around and go the other way to avoid interacting with a wild animal in close proximity,” said the NPS news release.

PFAS Firefighting Foam Spills at Notorious Red Hill Naval Facility in Hawaii
By Jessica Corbett
By Common Dreams
Canada Expands Its Pollution Pricing Rules
Canada is strengthening its pollution pricing rules, which include regulatory
By Paige Bennett
‘Beat the Heat’: UN Challenges Cities to Add Nature-Based Solutions to Climate Crisis
If you’ve ever sweated through an urban heat wave, it
By Olivia Rosane