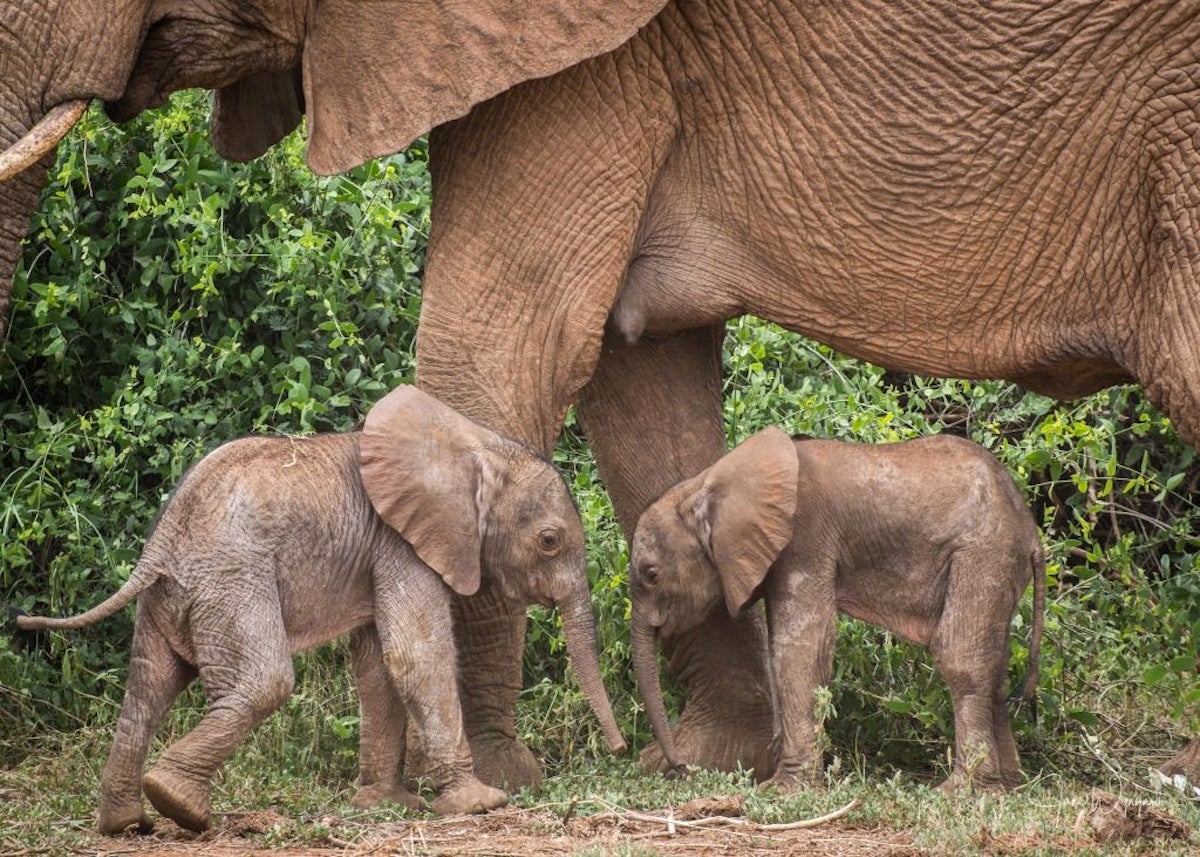 A pair of extremely rare twin African elephants have been born in Northern Kenya’s Samburu National Reserve. The baby elephants were discovered by guides from Elephant Watch Camp, who had been trained by Save the Elephants (STE) — a UK charity based in Kenya — to recognize individual elephants and elephant families in the reserve, STE said in a press release. After being notified by the guides, STE researchers confirmed that there was one female and one male calf.

“Twins are rarely encountered in elephant populations — and form around only 1% of births. Quite often the mothers don’t have enough milk to support two calves. In fact the birth of twins has only ever been recorded once before in Samburu in 2006. Sadly both calves died shortly after birth in Shaba National Reserve,” the STE press release said. “The next few days will be touch and go for the new twins but we all have our fingers crossed for their survival.”

The twins are the second birth of a female elephant named Bora who is from a family of elephants called Winds II. Her older calf was born in 2017 and was recently spotted in the same area as its mother and the twins.

“I have seen twins several times over my career and it’s always a big event for us… when we have had twins a couple of times before it wasn’t a happy outcome. However, they can survive. It always causes quite a stir when they are born,” STE founder Iain Douglas-Hamilton told Newsweek.

African elephants have the longest gestation period of any mammal, about 22 months, and give birth approximately every four years. The twin baby elephants will be monitored daily by the STE researchers, reported Newsweek. STE has been observing the Winds II family for decades.

Due to poaching and habitat loss, African elephants are on the International Union for the Conservation of Nature’s Red List of Threatened Species, according to BBC News. In 2020, the tourism ministry in Kenya reported that because of better efforts to fight poaching, the country’s elephant population had more than doubled from 16,000 in 1989 to 34,000 in 2018, as reported by Reuters.

The country’s first wildlife census in 2021 showed that Kenya’s elephant numbers had increased by about 12 percent to 36,280, Down to Earth reported.

According to Douglas-Hamilton, the new twin elephants were looking healthy, though perhaps somewhat small, reported Newsweek.

“The survival of the twins depends very much on the quality of the grass and vegetation and the experience of the matriarch,” Douglas-Hamilton told Newsweek. “This mother has had successful experience of raising a calf before and the fact that it has rained recently [means] the grass is green in Samburu and gives the little twins a greater chance of survival… We have to cross our fingers, but we are cautiously hopeful.”