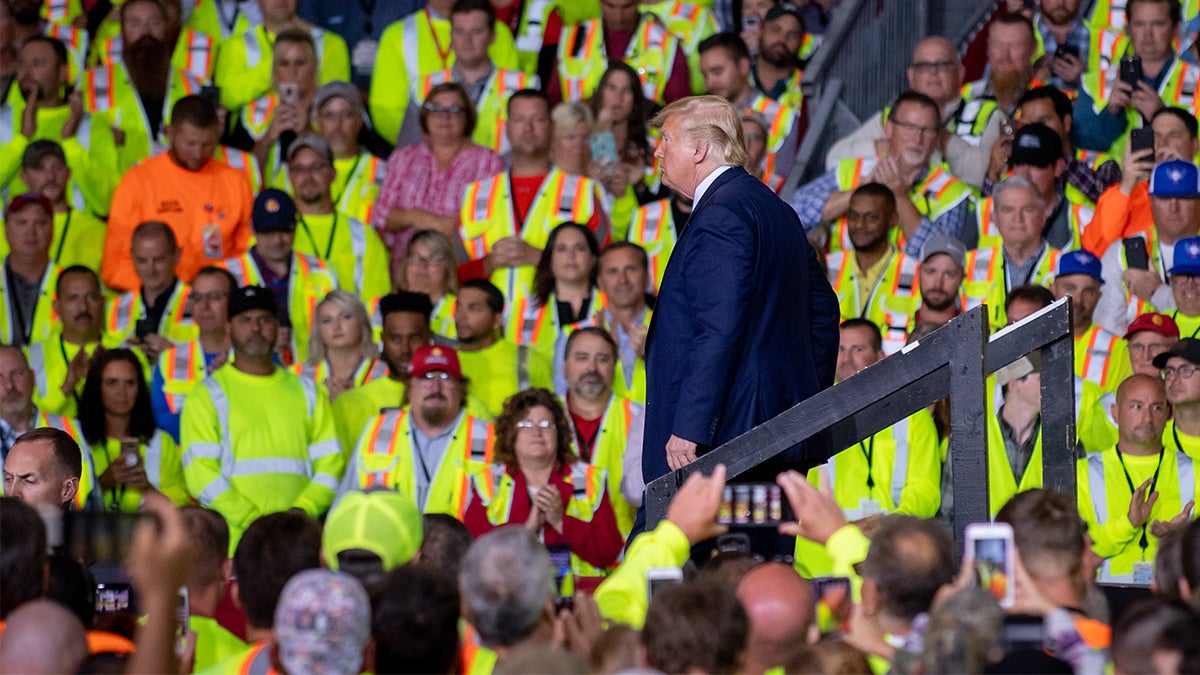 Thousands of union members at a multibillion dollar petrochemical plant outside of Pittsburgh were given a choice last week: Stand and wait for a speech by Donald Trump or take the day off without pay.

A contractor that hires the union sent a memo that said, “Your attendance is not mandatory,” but only employees who arrived by 7 a.m., scanned their ID cards and stood for hours would be paid, as the Pittsburgh Post-Gazette first reported.

“NO SCAN, NO PAY,” a supervisor for the contractor wrote, according to the Pittsburgh Post-Gazette. The employees even had to stand through lunch, though they did not eat lunch.

The president’s speech at the Royal Dutch Shell facility, where natural gas will be converted into plastic for a wide range of products, was to focus on “America’s Energy Dominance and Manufacturing Revival,” so it was sponsored by the White House and paid for by taxpayer dollars. However, it quickly went off script to sound like a campaign speech.

Trump took the time to slander Democratic primary candidates, saying, “I don’t think they give a damn about Western Pennsylvania, do you?” He also took credit for the construction of the Shell plant, which had first been announced under the Obama administration, telling the workers, “This would have never happened without me and us,” as TIME reported.

At one point he even weighed in on the union’s management, saying he would speak to them about supporting his reelection campaign. “And if they don’t,” said Trump to workers, according to The New York Times “vote them the hell out of office, because they’re not doing their job.”

Contracts for the workers at the plant stipulate that to get paid, the workers must be on site. “This was treated as a paid training day with a guest speaker who happened to be the president,” said Ray Fisher, a Shell spokesman, according to the Pittsburgh Post-Gazette. He said workers engaged in “safety training and other activities” in the morning. Those who chose not to attend would have an excused but unpaid absence, meaning they would miss out on any overtime pay later in the week.

Essentially, union employees at the site work a 56-hour week, with 16 of those hours as overtime, which pays time and a half. Workers who showed up and attended the speech on Tuesday would have enough hours banked to receive overtime pay by Friday. Those who skipped the president’s speech would only receive regular pay, despite the fact that neither group would have done any work for the plant on Tuesday.

One union leader who spoke anonymously to the Pittsburgh Post-Gazette said one day of work might mean 0 in pay, benefits, and a per diem payment that out-of-town workers receive.

The contractor who hired the union also had some strict rules for how the union members should comport themselves during Trump’s speech. A memo from the contractor read, “No yelling, shouting, protesting or anything viewed as resistance will be tolerated at the event. An underlying theme of the event is to promote good will from the unions. Your building trades leaders and jobs stewards have agreed to this,” as the Pittsburgh Post-Gazette reported.

Despite the rules, union members were bristling with anger and impatience since the event went past 3 p.m., when many of the workers’ regular shift ended. The workers worried they would not get paid for the extra time they spent holding in the warehouse, as NBC News reported. Some of the workers tried to leave before the president had finished speaking, but the Secret Service would not let them leave until Trump had left the site.

After Trump’s speech, workers were still held in the warehouse and started to boo and let out angry shouts about not being let out. A plant employee tried to calm them by reassuring the employees they would get paid for every moment they were in the plant, according to NBC News.