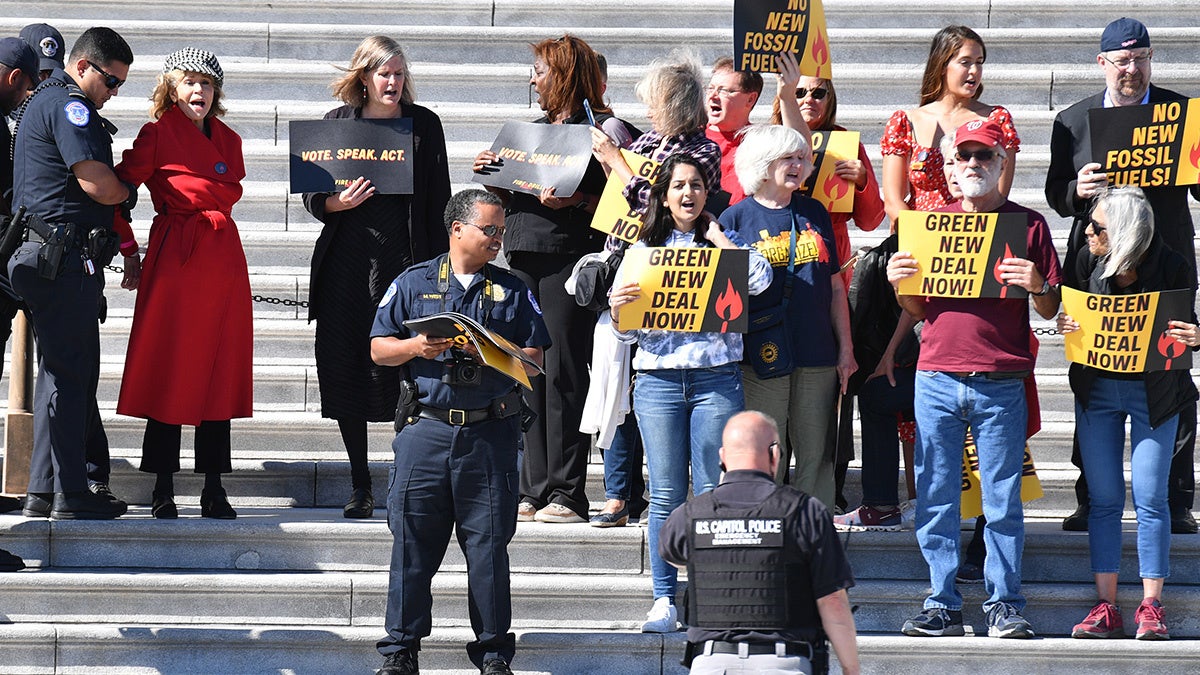 Actress Jane Fonda is arrested on the East Front of the U.S. Capitol in Washington, DC on Oct. 11. Marvin Joseph / The Washington Post via Getty Images

Oscar-award winning actress and long-time political activist Jane Fonda was arrested on the steps of Capitol Hill in Washington, DC on Friday for peacefully protesting the U.S. government’s inaction in combating the climate crisis, according to the AP.

Fonda, 81, was one of 16 people arrested for protesting and charged with “crowding, obstructing or incommoding” for demonstrating on the East Front of the Capitol, a misdemeanor under Washington, DC law. The city prohibits protestors from obstructing public building entrances, Capitol Police said, as The New York Times reported.

The protest was part of Fire Drill Fridays, a movement Fonda launched, inspired by Greta Thunberg’s Friday for Future strikes and named for the teenage activist’s quote, “We have to act like our house is on fire, because it is,” as Fire Drill Fridays wrote on Twitter.

On her website, Fonda said she announced that she had moved to DC and that she planned to protest every Friday until the new year.

“Inspired by Greta and the youth climate strikes as well as Reverend Barber’s Moral Mondays and Randall Robinson’s often daily anti-apartheid protests, I’ve moved to Washington, DC to be closer to the epicenter of the fight for our climate,” she wrote on JaneFonda.com. “Every Friday through January, I will be leading weekly demonstrations on Capitol Hill to demand that action by our political leaders be taken to address the climate emergency we are in. We can’t afford to wait.”

Fonda’s recently shared with the Los Angeles Times how Thunberg’s commitment had inspired her into action.

“She read the [Intergovernmental Panel on Climate Change] report and she realized that the crisis was barreling straight at us, like a train, and looked around and people weren’t behaving appropriately,” she said to the Los Angeles Times. “It so traumatized her that she stopped eating. I hadn’t realized that she stopped eating and speaking for almost a year. And that really hit me.”

Fonda said that every Thursday, on the eve of her protest, she will convene a panel of experts in a live stream to explain the climate crisis to interested viewers, according to the BBC. She has invited members of the Sunrise Movement — a group of young people who want to stop the climate crisis while creating millions of new jobs in a greener economy that does not rely on fossil fuels — as The Washington Post reported.

Last Monday, Fonda posted a picture to Twitter of herself at dinner with youth activists from the Sunrise Movement and the Fridays for Future climate strikes.

Fonda, who will be back on the Capitol steps next Friday, said her group wants to persuade lawmakers to support the Green New Deal, which calls for an overhaul of infrastructure and to achieve net-zero carbon emissions for the U.S. economy by 2050. Ancillary to that, the demonstrators want Congress to put an end to fossil fuel exploration and to “phase out” fossil fuel infrastructure, said Ms. Fonda, as The New York Times reported.