Here’s How Lakes Could Power the Nation 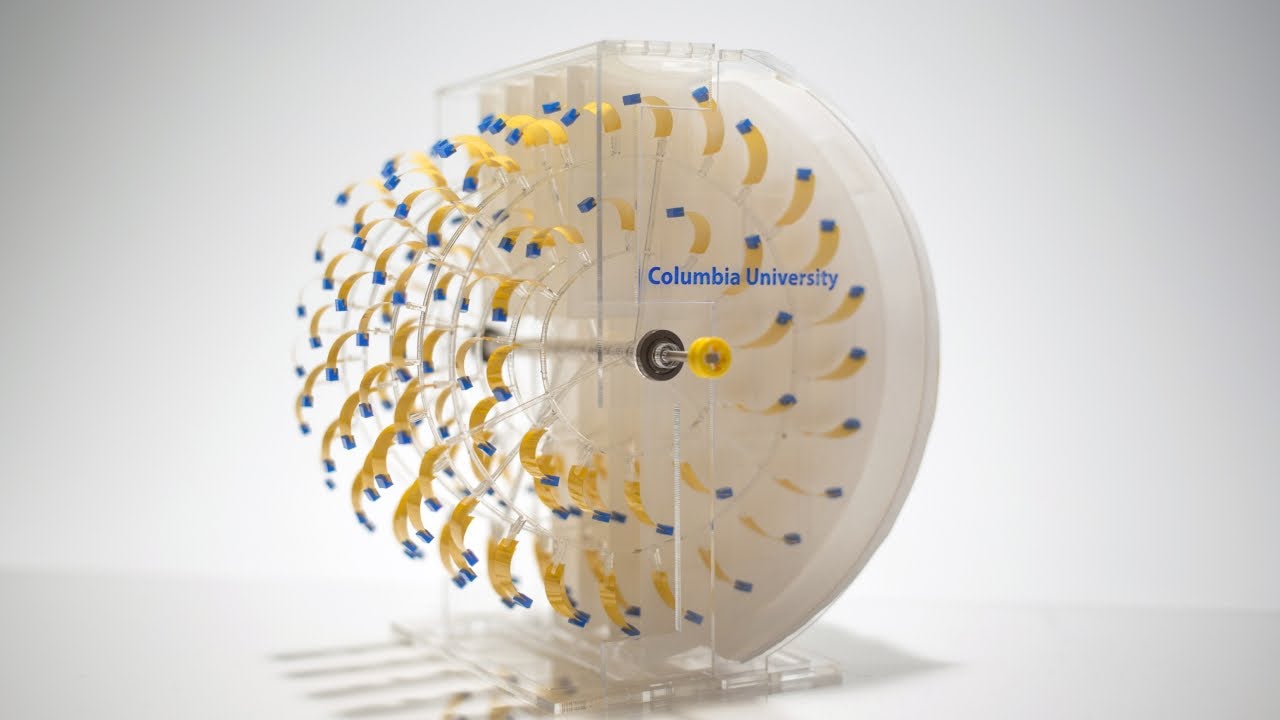 When the conversation turns to sources of clean renewable energy, evaporation usually isn’t the first thing to come up, if at all.

Yet scientists think evaporation from U.S. lakes and reservoirs could generate almost 70 percent of the power the nation produces now. Even better, it could meet demand both day and night, solving the intermittency problems posed by solar and wind.

“Evaporation occurs day and night, all year round,” said Ahmet-Hamdi Cavusoglu, a graduate student at Columbia University and lead author of a new study published in the journal Nature Communications that calculated the possible future impact of evaporation as a renewable energy source. “By controlling evaporation, we can store and control the power output, allowing us to potentially provide reliable energy on demand without needing batteries and other energy storage methods.” 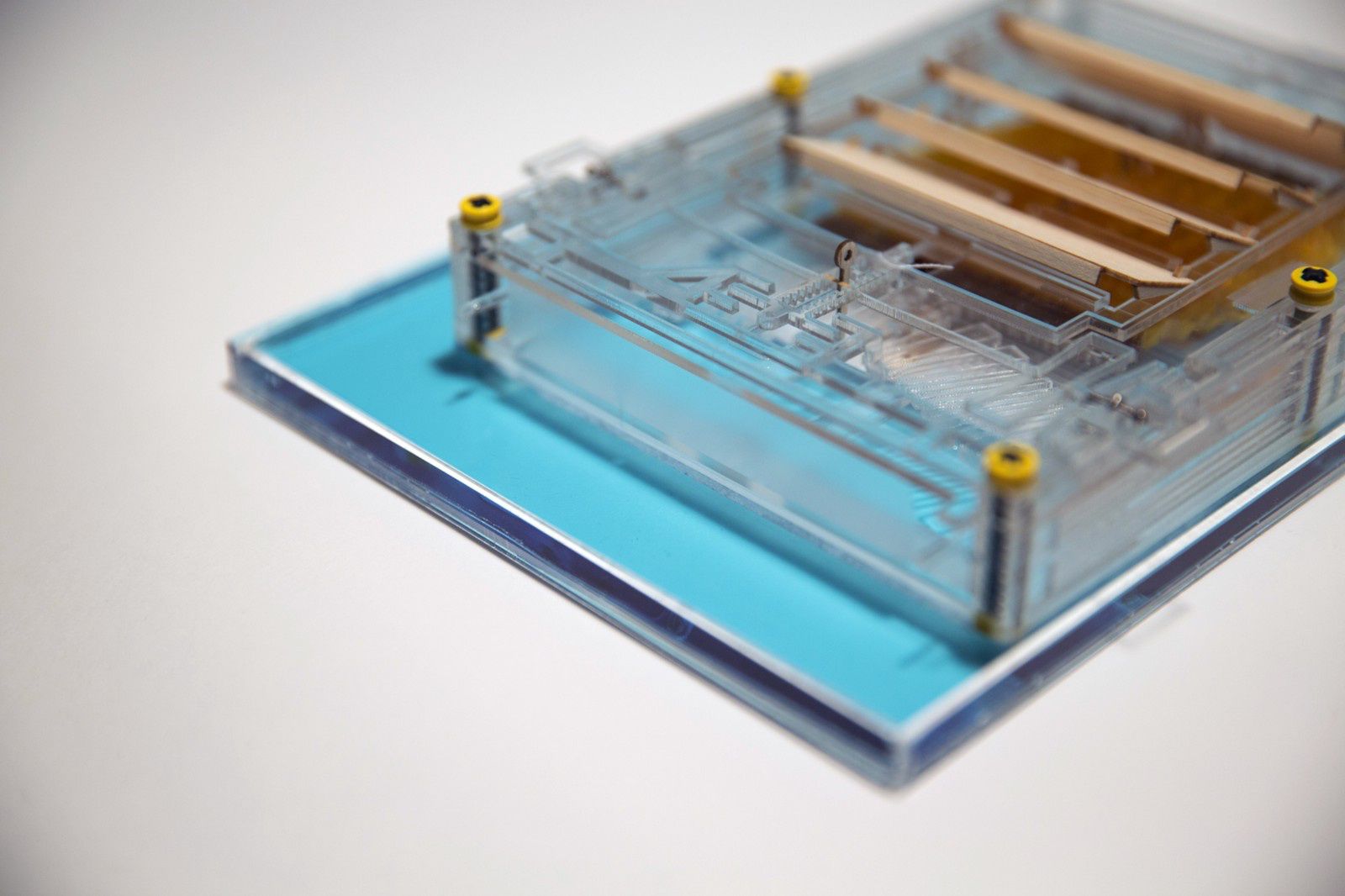 The evaporation engine sits on a shallow pool of blue water. When water on the surface below evaporates, it drives the flaps to move back and forth. When connected to a generator, that motion produces electricity. Xi Chen

Ozgur Sahin, a biophysicist at Columbia and the paper’s senior author, has developed technology that uses spores from the harmless soil-dwelling bacterium B. subtilis to absorb and release water when the relative humidity of the surrounding air changes. At high humidity, the spores take in water and expand, and at low humidity they release water and contract. “In this process, they act like a muscle,” he said. “They are highly effective muscles, and it is possible to assemble spores into larger materials that move and generate force when humidity levels change.”

The moving end of the strips is connected to a generator, which produces the electricity. “We have the technology to harness energy from wind, water and the sun, but evaporation is just as powerful,” Sahin said. “We can now put a number on its potential.”

The evaporation engine sits on a shallow pool of blue-colored water. When water on the surface below evaporates, it drives the flaps to move back and forth. When connected to a generator, that motion produces electricity. Sahin Laboratory

The technology also has the potential to save water. The study estimated that half of the water that evaporates naturally from lakes and reservoirs into the atmosphere could be conserved during the process, amounting to around 25 trillion gallons annually, or about a fifth of the water Americans consume.

Sahin added that conserving that much water would have little impact on weather patterns. Even if it were deployed at a large scale, his technology would not meaningfully reduce atmospheric moisture that later results in heavy rain because “precipitation and moisture is mostly imposed by the ocean,” he said.

Klaus Lackner, an Arizona State University physicist not involved in the study, is developing artificial trees that draw carbon dioxide from the air, in part by using evaporation. “Evaporation has the potential to do a lot of work,” Lackner said. “It’s nice to see that drying and wetting cycles can also be used to collect mechanical energy.”

In computing the potential output of evaporation, the authors confined their calculations to the U.S., where weather station data are readily available, and excluded areas such as farmland, rivers, the Great Lakes and coastlines to avoid errors associated with modeling more complex interactions.

To be sure, the researchers’ work is still experimental and confined to the lab. However, “if the technology can be made efficient and scaled to the size of a football field, then widespread use of evaporation as an energy source could be possible,” Sahin said. “There are many such bodies of water used by farmers, municipalities and water management agencies,” which could provide sources of evaporation in addition to natural bodies of water. Moreover, since many of the materials used are biological and can be easily grown, the machinery likely would not be very expensive, he added.

One of its major advantages is the ability to produce power only when needed. Solar and wind, on the other hand, require backup batteries when the sun isn’t shining or the wind isn’t blowing. Moreover, batteries aren’t cheap, and they often are made of toxic materials.

Harvesting energy from evaporation can cut the amount of water lost to natural evaporation in half, researchers say. Water-strapped cities with growing populations and energy needs could benefit most, including Phoenix, which is served by the reservoir pictured above.Central Arizona Project

“Human electricity demand varies seasonally and daily,” Cavusoglu said. “We use more energy during the summer, and we use more energy in the early evening when people get home from work. However, the availability of wind and solar power does not match our demand. This need for energy on demand is important for our daily life, from keeping the lights on in hospitals to letting us stream Netflix at home.”

Since evaporation packs more energy in warm and dry weather, drought-prone states like California, Nevada and Arizona could benefit greatly from the technology. “Interestingly, many dry-air areas do have some lakes or large bodies of water,” Sahin said. “For example, the Colorado River and the large lakes formed by dams, such as Lake Mead, Lake Mohave, Lake Powell and Lake Havusu.”

Still, “if there are no water bodies or other wet surfaces, evaporation will be negligible and this concept will not work,” he added. “However, even in that situation, daily variations in relative humidity could be harnessed to generate power.”

This turbine engine rotates as water evaporates from the wet paper lining the walls of the engine.Sahin Laboratory

Several years ago, Sahin’s lab also developed an evaporation-fueled piston-driven engine that generates electricity causing a light to flash, and a rotary engine that drives a miniature car. The scientists now are working on improving the energy efficiency of their materials, and plan to test their concept on a lake, reservoir, or greenhouse where the technology could both conserve water and create power.