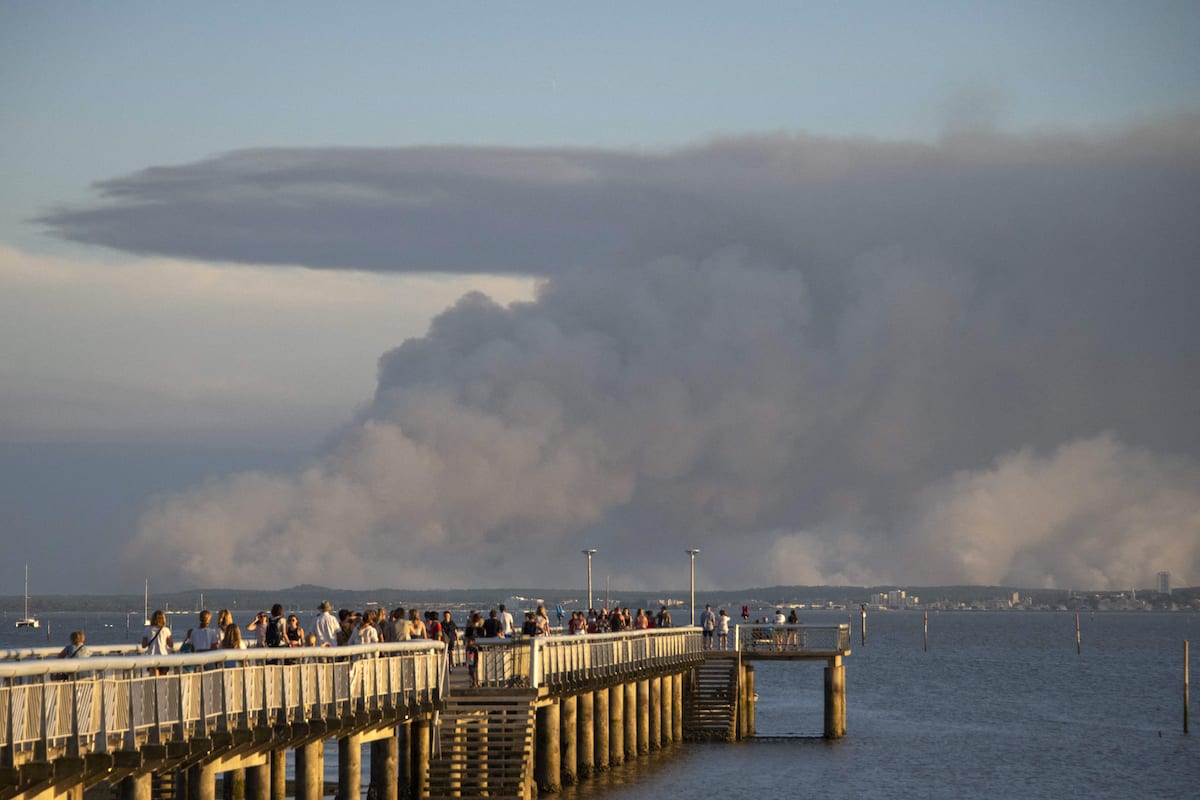 Tourists watch smoke on the shoreline of Arcachon from the peer in Andernos-les-Bains, due to a forest wildfire near La Teste, southwestern France, on July 14, 2022. OLIVIER MORIN / AFP via Getty Images

Europe is in the midst of a climate-fueled heat wave that has ignited dangerous wildfires from Portugal in the west to Turkey in the East.

The fires come as EU Commissioner EU Commissioner Maroš Šefčovič warned last Thursday that 2022 could be one of the continent’s worst years for extreme weather events like drought and wildfire because of the climate crisis, as AP News reported. The latest round of high temperatures comes less than a month after the continent experienced an early, fire-triggering heat wave in June.

“Statistics show that since 2017, we have the most intense, intense forest fires ever seen in Europe. And that we unfortunately expect the 2022 forest fire season could follow this trend,” Šefčovič said.

His words proved immediately prophetic. A week later, dozens of fires are raging in Portugal, fueled by record-breaking heat, as BBC News reported. Six hundred people were forced to evacuate their homes in Leiria.

“[E]verything burned,” 77-year-old farmer Adelino Rodrigues from the municipality in central Portugal told BBC News. “It looked like the end of the world.”

As of Wednesday, the fire had burned through more than 7,400 acres, AP News reported. Wildfires are a regular occurrence in Portugal, where they killed more than 100 people in 2017. Since then, the country has worked to improve firefighting and forest management to avoid fatalities. However, this summer, hot air from Africa is causing temperatures to soar on the Iberian Peninsula. The thermometer was expected to hit 46 degrees Celsius in the Alentejo region Wednesday and Thursday, and 96 percent of the country has been experiencing severe or extreme drought since late June. While changed policy had successfully prevented fire deaths since 2017, one body was found in a charred part of the northern Aveiro region, BBC News reported.

“I don’t remember anything like what is happening today,” 75-year-old Leiria retiree Joaquim Gomes said, as Metro reported.

Wildfires are also raging in neighboring Spain, where a fire began in the western Extremadura region Tuesday and spread into the province of Salamanca in the Castile and Leon region, Reuters reported Thursday. It has burned 9,900 acres and forced the evacuation of 49 children at a summer camp Thursday. More than 400 people were forced to flee the flames on Tuesday, AP News reported.

Most of Spain was under a high heat alert Wednesday, and its hottest day of the year is expected today, BBC News reported. But even before the most recent heat wave and fires, the country had seen an unusual number of blazes — nearly double the last decade’s average number of hectares have burned between January 1 and July 3.

The current heat dome first closed over Spain and Portugal, but is expected to spread, according to Metro.

“It is affecting large parts of Europe and it will intensify,” World Meteorological Organization spokesperson Clare Nullis said, as Metro reported.

In southwestern France, two blazes have burned nearly 4,000 hectares, BBC News reported, and around 1,000 firefighters are working to contain them.

“The fires are still not under control,” the local authority for the Gironde department said, as Reuters reported Thursday.

The blazes ignited Tuesday. The first, south of Bordeaux, forced 500 from their homes. The second, along the Atlantic coast, drove around 10,000 people from campsites Wednesday and Thursday.

“Other campers woke us up at around 4:30 in the morning. We had to leave immediately and quickly choose what to take with us,” fleeing vacationer Christelle told BFM TV, as Reuters reported Wednesday.

There are also three major wildfires raging on Croatia’s Adriatic Coast, Reuters reported Thursday. At one point, flames swallowed a church tower briefly and residents fled in rubber boats, according to AP News.

A fire that broke out Wednesday on Turkey’s southwestern Datca peninsula also forced 450 houses and 3,530 people to evacuate, Reuters reported. However, authorities say it is now under control.

A recent review of extreme weather events found that the uptick in heat waves was clearly attributable to the climate crisis. Another study published in Nature last week found that heat waves in Europe are increasing three to four times more quickly than at other places at similar latitudes. This is partly because the jet stream is dividing in half for longer.

And heat waves breed wildfires. The UN has warned that especially severe wildfires will increase by 30 percent by 2050 and 50 percent by 2100, largely because of warming temperatures due to the burning of fossil fuels.