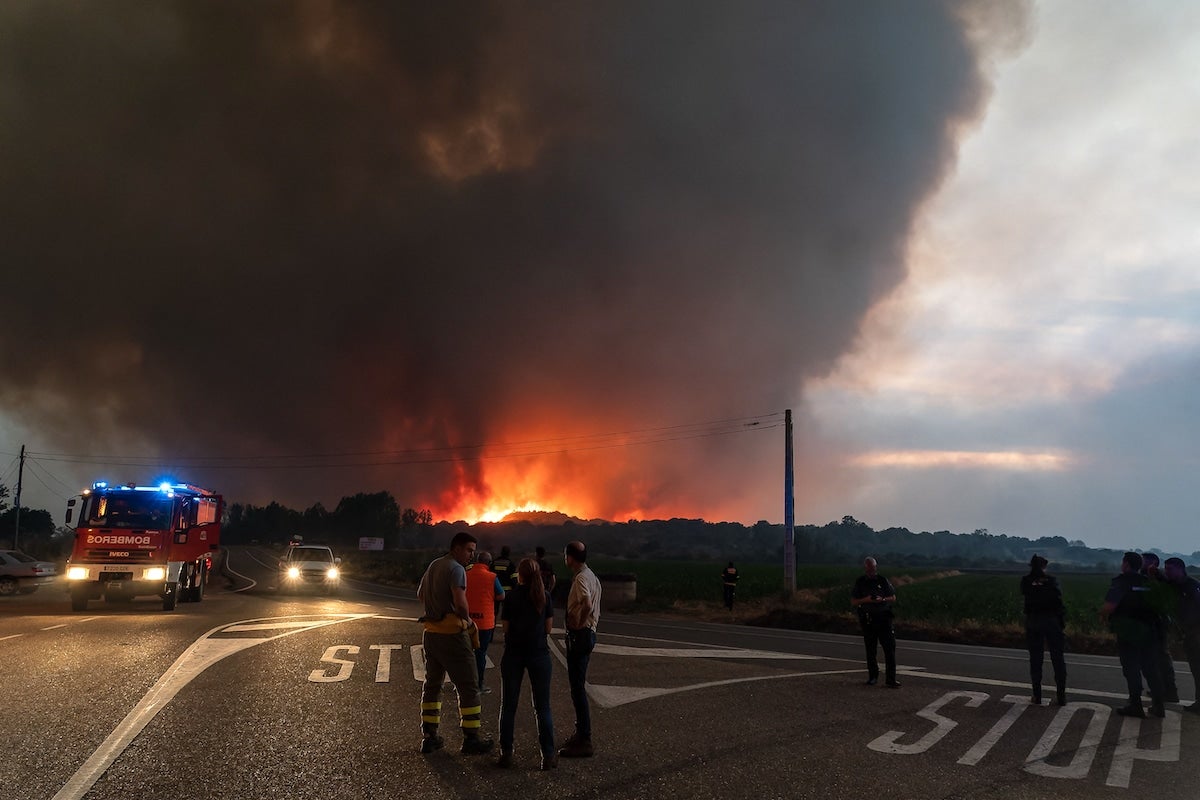 An early June heat wave has broken records and ignited wildfires in Western Europe, leading to concerns that this could be the new normal as the climate crisis makes extreme weather events like heat waves more frequent and intense.

Spain experienced temperatures that it normally doesn’t see until August, according to AP News, while France saw its earliest heat wave on record since 1947, as France 24 reported. The European heat wave came as much of the U.S. also sweltered under unusually warm temperatures for June.

“As a result of climate change, heatwaves are starting earlier,” World Meteorological Organization spokeswoman Clare Nullis told The Independent of the heat wave. “What we’re witnessing today is unfortunately a foretaste of the future.”

Temperatures in France spiked Friday and Saturday, with 11 different areas breaking June records on Friday, as France 24 reported. The coastal town of Biarritz broke an all-time record by hitting 41 degrees Celsius on Saturday.

Almost 75 percent of France’s population sweltered under red or orange heat alerts, according to Euronews, leading some to endure sleepless nights.

“I get up, I go to the bathroom, I come back, I drink a glass of water, then I sit down, I watch TV, that’s it. Until 2 am in the morning,” 70-year-old Christian Thurillat told Euronews.

The high heat also caused ozone levels to spike in many parts of the country, which can cause respiratory symptoms. Further, military training in the south of France sparked a fire that burned 495 acres and prompted the evacuation of 2,500 sheep, France 24 reported.

More than sheep had to be evacuated in Spain, where wildfires have forced hundreds from their homes, The Washington Post reported.

The largest fire is in Zamora, in the northwest of the country, and has burned through 74,000 acres, AP News reported Monday. The fire was ignited by a lightning strike Wednesday and was fanned by a combination of high heat, a period of low rainfall and high wind. Around 15 villages in the region of Navarra were also evacuated as a safety precaution in response to the fires.

Overall, dozens of fires ignited in eight of the country’s 17 regions, with more than 30 blazes burning in Catalonia, The Guardian reported.

Temperatures in Spain broke records, including at the Valencia Airport, which recorded a June high of 39 degrees Celsius, The Washington Post reported.

The State Meteorological Agency said the heat wave was the earliest in more than 40 years.

High temperatures in Germany also sparked wildfires, including one around 31 miles southwest of Berlin, AP News reported. This forced the evacuation of around 600 people in the villages of Frohnsdorf, Tiefenbrunnen and Klausdorf.

“This is not a drill,” town officials tweeted of the orders, as AP News reported.

In Italy, meanwhile, the worry is drought. Multiple towns in the north of the country have said they will ration water, France 24 reported. The region of Lombardy may have to declare a state of emergency.

The heat is also causing another source of liquid to run dry: milk. Because temperatures are well above dairy cows’ ideal range of 22 to 24 degrees Celsius, they are drinking double their normal amount of water but producing 10 percent less milk, the Coldiretti agriculture association said.