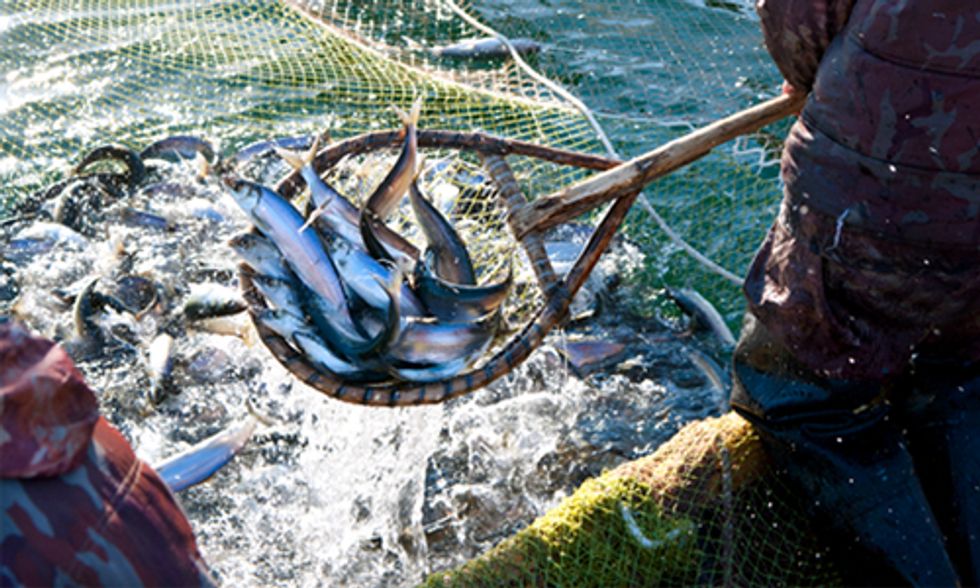 Scientists and economists are concerned that commercial seafood harvesting may end within three decades. A prominent marine research ecologist says that commercial seafood from our oceans could disappear within the next three decades if humans don't take action immediately.
If the long-term trend continues, there will be little or no seafood available for a sustainable harvest by 2048.
Photo credit: Shutterstock

Dr. Boris Worm of Dalhousie University in Halifax, Canada warns that the oceans are quickly losing biodiversity and that nearly 30 percent of seafood species that humans consume are already too small to harvest. If the long-term trend continues, there will be little or no seafood available for a sustainable harvest by 2048.

Dr. Worm's study was recently published in the journal Science and is an update of a study that was published in 2006. Importantly, the study is of the collapse of commercial catches, not species extinction. Catch collapse means that fish are caught at 10 percent or less of the rate they had been caught historically. Several media outlets have incorrectly stated that the study warns that all seafood will be gone from the ocean. CBS News, for example, reported that "the apocalypse has a new date: 2048" and that the oceans would be empty of fish at that time. To our knowledge, the television network has not issued a retraction.

"We never said that," says Dr. Worm. “We never talked about extinction. We talked about the collapse of the commercial catches."

Still, Worm and his international team of scientists and economists say that catch collapses still paint a grim picture for the ocean and for human health. The accelerated loss of biodiversity, they say, is imperiled by overfishing, pollution, habitat loss and climate change. Saltwater ecosystems, including human populations that depend on them for survival, can be adversely affected by dwindling populations. Harmful algae blooms, coastal flooding and poor water quality can be the results of reduced fish populations.

"Biodiversity is a finite resource, and we are going to end up with nothing left ... if nothing changes," says Worm.

The updated study points out that it's not too late to change, however. Areas can be managed for improved biodiversity and recovery is possible, says the study. In areas of the world where action has been taken to protect marine species, there have been notably positive results.

The problem is already affecting the U.S. seafood industry. Scientists are urging a moratorium on cold water shrimp harvesting in the Gulf of Maine as rising ocean temperatures are threatening populations of the tiny crustacean. This is the second straight season that researchers have urged that the netting of northern shrimp be halted.

The northern shrimp catch in Maine has been falling in recent years, as it has in neighboring New Hampshire and Massachusetts. However, it is estimated that some 85-90 percent of the northern shrimp caught in the Gulf of Maine are brought in by Maine boats. In 2010, more than 12 million pounds were caught by them, but it has declined by a factor of 14; less than 600,000 pounds were caught last year, according to the state of Maine.

The shrimp harvest averaged some 25 million pounds a year from 1969 to 1972 before falling below one million pounds in 1977. Those involved in the regional fishing industry are noticing a sharp decline in the population and are worried. Glen Libby, a shrimp processor and former fisherman, told the Portland Press Herald that the 2013 season was a bust and fishermen are finding few shrimp in their nets over the summer. He said it “probably is a good idea to give the fishery time to recover."