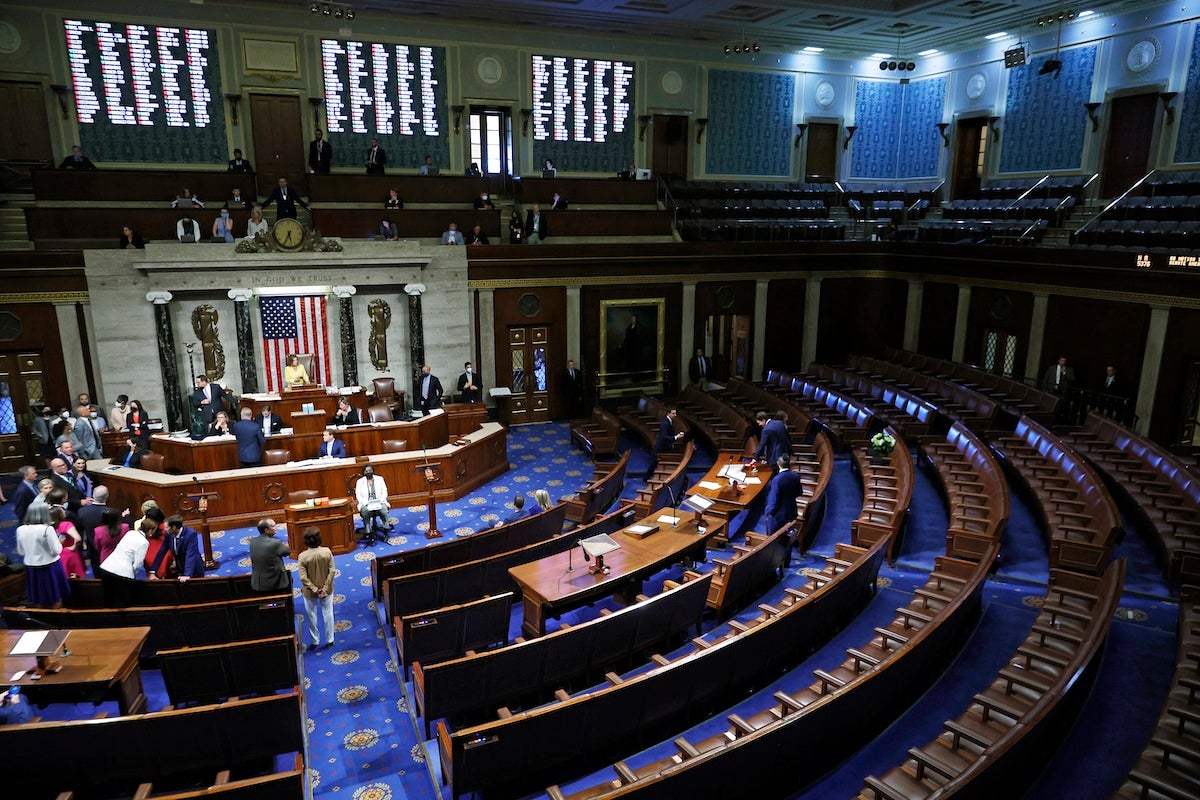 With the Republican side of the chamber almost empty, Speaker of the House Nancy Pelosi (D-CA) raps the gavel as she announces the Inflation Reduction Act of 2022 passed 220-207 in the House Chamber at the U.S. Capitol in Washington, DC on Aug. 12, 2022. Chip Somodevilla / Getty Images

Now that the dust is beginning to settle from the U.S. midterm elections and it is clear that Democrats will retain control of the Senate while the House of Representatives will pass to a narrow Republican Majority, what does this mean for the next two years of climate and energy policy?

With seven House races still to be called, the Republicans declared a House victory Wednesday with at least 218 seats. The Democrats, meanwhile, have at least 50 Senate seats and could have 51 if Democrat Reverend Raphael Warnock wins a December 6 Georgia runoff against Republican Herschel Walker. The balance of power means Republicans have greater ability to put up roadblocks for President Joe Biden’s climate and renewable energy agenda, but not enough control to reverse important gains like the Inflation Reduction Act (IRA). Jonathan Silver, formerly of the Department of Energy’s Loan Programs Office and currently global climate council chair at private equity firm Apollo Global Management, told E&E News that the momentum for the energy transition was now too strong for a Republican House to stymie.

“My overriding perception here is that the war is over,” Silver said. “Clean has won.”

Analysts agree that a Republican House will not be able to reverse the IRA with a Democratic Senate and Biden in the White House.

“I’m not concerned about the unwinding of any recent policy wins that have happened in the U.S.,” Clean Air Task Force (CATF) federal policy officer Lindsey Baxter Griffith told Climate Home News. “Policymaking is difficult and undoing it is just as difficult.”

This means the U.S. will spend around $369 on the transition to renewable energy. Two thirds of that money comes in the form of tax credits lasting at least 10 years, according to E&E News, which could increase wind generation from 15 gigawatts in 2020 to 39 gigawatts between 2025 and 2026 and increase utility scale solar generation from 10 gigawatts a year in 2020 to 49 gigawatts a year in 2025, according to an analysis from Princeton University’s Repeat project. Overall, the act could reduce emissions to 42 percent of 2005 levels by 2030.

This means that Biden will be able to assure other world leaders that serious emissions reductions are now enshrined in U.S. law, which is something that no president before him has been able to claim, The New York Times pointed out.

That said, Republicans can make things more difficult for the administration by subpoenaing members of agencies responsible for implementing the law to look for fraud or poor investments, like the $537 million in Obama-era stimulus that went to solar panel maker Solyndra before it went bankrupt. (Most of the 2009 stimulus money directed towards renewable energy did lead to expanded capacity while generating around one million jobs.)

“Can they block the law? No. Can they slow down or entangle implementation? Absolutely,” Bipartisan Policy Center President Jason Grumet told The New York Times.

Yet it also may turn out that, as the IRA moves from theory to reality, the voters living in so-called red states come to embrace it.

“There might have been an initial desire to try to roll back parts of the IRA, but the majority of the funds [in the IRA] will go to Republican controlled states,” Friends Committee on National Legislation environmental advocate Clarence Edwards told Climate Home News. “Once you pass something and people start seeing the benefits of the bill, it’s hard to [repeal it].”

Because the Democrats no longer control both chambers of Congress, it will be difficult for Biden to pass additional legislation to meet his stated goal of halving U.S. emissions by 2030, The New York Times noted. Instead, he will have to rely on planned regulations from the U.S. Environmental Protection Agency to reduce emissions from power plants, oil and gas wells and cars, but these could be challenged in the courts or rolled back by a future Republican administration.

Brett Hartl, government affairs director for the Center for Biological Diversity, told E&E News that a Republican Congress could push back on these initiatives by, for example, limiting the money allocated to Interior.

“It’s going to be an incredibly adversarial, hostile, confrontational Congress that is going to try to thwart and stymie pretty much any and every initiative that Interior tries to do,” he said.

One potential point of compromise between the Democratic Senate and the Republican House would be a measure to fast-track the permitting process for both oil and gas and renewable energy projects.

This is something that Democratic West Virginia Senator Joe Manchin hoped to secure in exchange for supporting the IRA, but ultimately was not able to rally sufficient votes for ahead of the midterms.

In general, though, Republicans do support permitting reform for oil and gas pipelines while some Democrats hope to speed up the construction of new electric power lines to transmit renewable energy, according to The New York Times. However, some Democrats do not believe such a compromise would be worth the extra fossil fuel emissions from fast-tracked fossil fuel infrastructure and frontline communities oppose any policy that would limit their control over what happens in their backyard.

In general, however, there is hope for bipartisan support for clean energy legislation in the future as the industry grows and increases its influence.

“The clean energy industry has become, well, industrial; it is a major economic force now,” Colin Hayes, former staff director for Republicans on the Senate Energy & Natural Resources Committee and current lobbyist, told E&E News. “So, even though the debate over what to do on climate policy has been fairly polarized, I’d expect to see a continued increase in bipartisan cooperation on clean energy.”