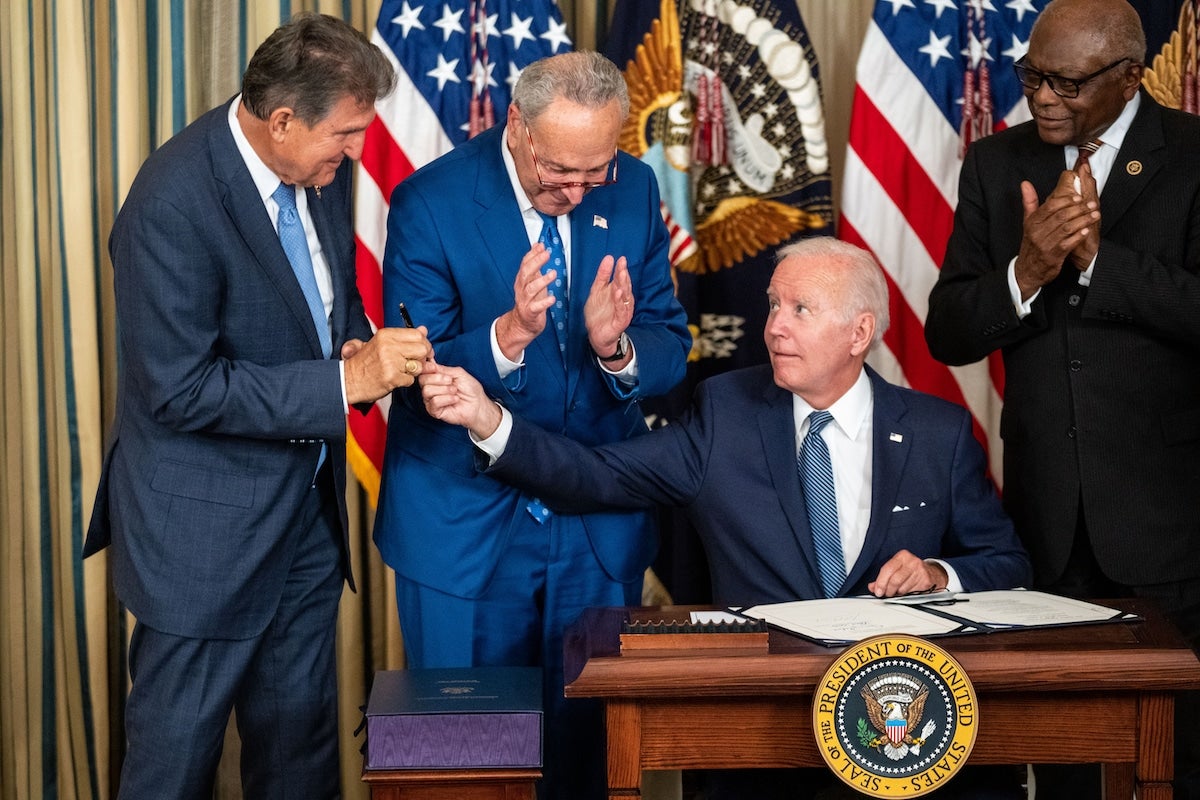 President Joe Biden and influential West Virginia Senator Joe Manchin clashed over the future of coal in the U.S. ahead of the midterm elections Tuesday.

The conflict started when Biden gave a speech in Carlsbad, California, Friday on the CHIPS and Science Act. This act, signed by Biden in August, was designed to boost semiconductor manufacturing in the U.S., according to the White House. During his speech, Biden noted how wind and solar electricity are now cheaper than coal and oil and offered up the example of a Massachusetts coal plant that had shuttered because operation costs grew too expensive and has now switched to wind energy. (He was likely referring to the Brayton Point Power Station in Somerset, Massachusetts, a former coal plant resurrected as a manufacturer of offshore wind cables.)

“No one is building new coal plants because they can’t rely on it, even if they have all the coal guaranteed for the rest of their existence,” Biden said, according to a White House transcript of the speech. Then he added the portion that struck a nerve with Manchin.

“We’re going to be shutting these plants down all across America and having wind and solar,” Biden said.

Manchin responded the next day with a statement calling the remarks “offensive and disgusting.”

“President Biden’s comments are not only outrageous and divorced from reality, they ignore the severe economic pain the American people are feeling because of rising energy costs,” Manchin said. “Comments like these are the reason the American people are losing trust in President Biden and instead [believe] he does not understand the need to have an all in energy policy that would keep our nation totally energy independent and secure.”

Manchin further added that Biden had never mentioned a plan to close down coal plants to him and called on the president to apologize to coal workers.

“The President’s remarks yesterday have been twisted to suggest a meaning that was not intended; he regrets it if anyone hearing these remarks took offense,” she said. “The President was commenting on a fact of economics and technology: as it has been from its earliest days as an energy superpower, America is once again in the midst of an energy transition.”

Jean-Pierre noted that oil and gas production were on the rise and set to hit record levels next year. She also said that Biden was committed to an energy transition that would benefit everyone.

“He is determined to make sure that this transition helps all Americans in all parts of the country, with more jobs and better opportunities; it’s a commitment he has advanced since Day One. No one will be left behind,” she said.

Manchin has long been criticized by climate activists for his ties to the fossil fuel industry. He has received more money from fossil fuel and pipeline companies than any other U.S. legislator. He has long been a stumbling block in Biden’s climate agenda, scuppering the passage of the Build Back Better Act. He did vote for the Inflation Reduction Act (IRA), but only after securing a side deal that would fast track energy projects including the controversial Mountain Valley Pipeline in Virginia and West Virginia. However, the deal has yet to go through as it did not have enough votes to be included in a recent funding bill.

Neither the Biden administration nor Manchin acknowledged that the Intergovernmental Panel on Climate Change (IPCC) has said that coal burning must end by 2050 in order to limit global warming to 1.5 degrees Celsius above pre-industrial levels and avoid the worst impacts of the climate crisis. Further, the International Energy Agency has said that, in order to achieve net zero emissions by 2050, no new oil and gas fields or coal mines can be developed as of 2021 and no new coal plants can be constructed. The least efficient coal plants should be phased out by 2030 and remaining ones retrofitted by 2040.