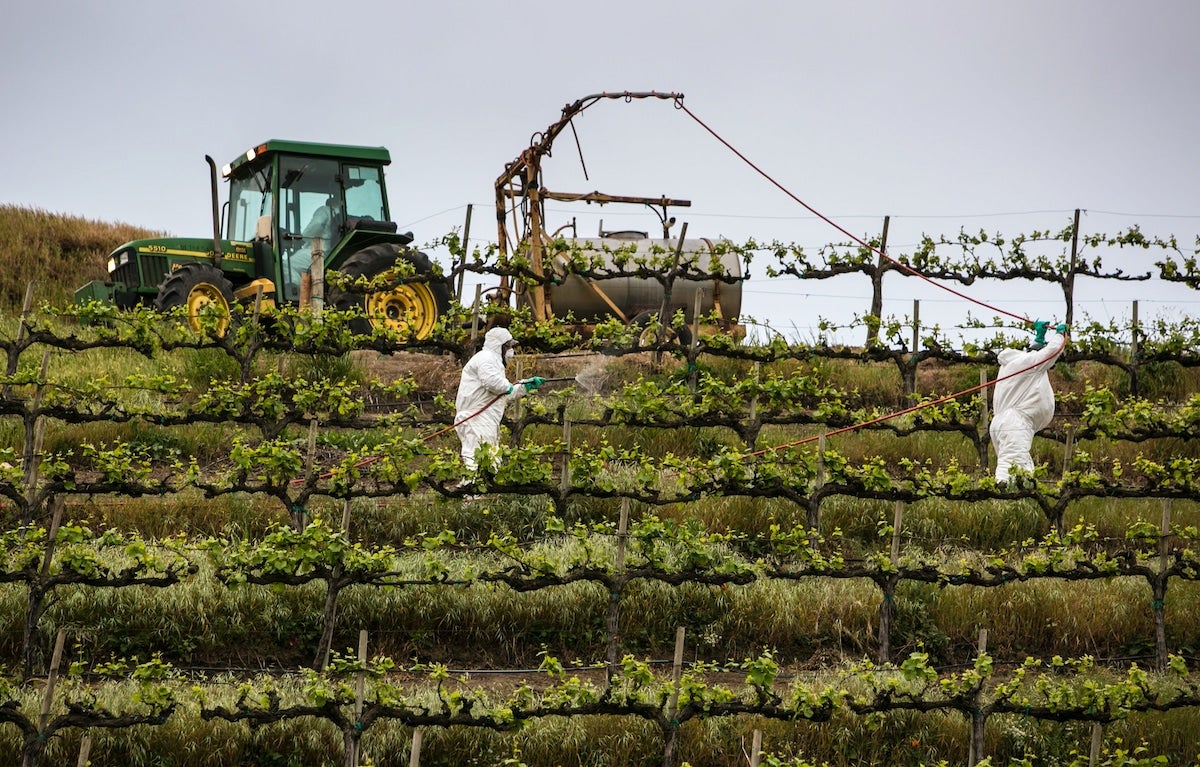 As we strive for a more environmentally conscientious world, everything we eat, drink and buy can be looked at from the vantage point of sustainability. And that includes simple pleasures like wine.

In California, wine means big business, and it’s standard practice for winemakers to coat their grapes with a sulfur-based fungicide in order to prevent them from being infected with mildew that can devastate crops.

But what happens when a rain shower comes and washes the sulfur off the grapes?

It turns out that scientists can distinguish agricultural sulfur from atmospheric sulfur by agricultural sulfur’s unique chemical fingerprint that can be identified at the atomic level, according to a press release from the University of Colorado Boulder (CU Boulder).

In a new study, “Sulfur isotopes reveal agricultural changes to the modern sulfur cycle,” published recently in the journal Environmental Research Letters, the researchers from CU Boulder show that this distinct agricultural sulfur signature can be traced from the time it’s applied to the grapes in vineyards to where it ends up in the environment. Their findings could lead to a better ability to protect downstream waters and wetlands from its effects, such as possibly stirring up toxic heavy metals like mercury.

“We found that you could see the effect of vineyard agriculture in the Napa River when vineyards are only 11% of the land cover in the whole watershed. It’s a very stable fingerprint for us to trace and then understand what ultimately happens,” said assistant professor of environmental studies at CU Boulder Eve-Lyn Hinckley, who was senior author of the publication, the press release said.

How much sulfur gets washed into the environment downstream depends on the year, and the weather.

“The amount of sulfur in runoff varies year to year, dependent upon the amount of precipitation. In dry years, it stays locally in soils, in the vineyards where it is sprayed. We do not have evidence that it is unsafe for consumers,” Hinckley told EcoWatch in an email.

In 2020, agricultural sulfur, which is used as a fertilizer and is the most commonly used pesticide by California farmers — particularly winegrowers — became the biggest anthropogenic source of the element, surpassing even fossil fuels, the press release said.

Prior to the Clean Air Act of 1970, which reduced the prevalence of atmospheric sulfur to pre-industrial levels, what was known as “acid rain” was a frequently talked about environmental issue. But Hinckley said winegrowers use much more sulfur now than was produced by the atmosphere when acid rain was prevalent in Europe and North America.

In their research, the scientists took soil and surface water samples from across California’s Napa Valley. By analyzing the makeup of the sulfur, they were able to find the agricultural sulfur’s distinct chemical fingerprint, which is maintained even through the chemical changes it undergoes when it interacts with other elements and microorganisms in the environment.

“It’s very different from the signature that we see in atmospheric deposition or geologic weathering, which are the other background sources of sulfur,” Hinckley said in the press release.

Agricultural sulfur can be particularly concerning when it makes its way into streams and wetlands.

“Sulfur in runoff can interact with other elements in ecosystems adjacent to or downgradient from vineyards. In particular, it is a concern for wetlands and stream sediments. There, reducing conditions can persist that stimulate interactions between sulfur and heavy metals, like mercury, which are toxic to wildlife and people,” Hinckley told EcoWatch. “In order to know whether agricultural sulfur has consequences for ecosystems and human health, it will be helpful to distinguish it chemically from other sources, like marine, geologic, and atmospherically-deposited sulfur.”

As sulfur travels through the environment, it can have toxic results.

“In soil, oxidation of reduced forms of sulfur can lower pH and potentially cause acidification of soils and sediments over time. In wetland and stream areas, reduction of sulfate (a chemical process) can stimulate production of methylmercury, a neurotoxin that is dangerous to wildlife and humans. We know about these effects from long-term studies of acid rain damage in forested ecosystems. Now we need to investigate the fate, transport, and consequences of agricultural sulfur use,” Hinckley said to EcoWatch.

According to the press release, sulfur has been used in agriculture since Egyptian times, and the sulfur dioxide added to the wine during the winemaking process — or left out, making the wine eligible for the “no sulfur added” label — isn’t the same as the sulfur applied to the grapes beforehand.

“The sulfur that is the subject of our study is added in the field and it is not desirable to have the residue carry over on the grapes at harvest. Growers stop applying sulfur before harvest to avoid carryover,” Hinckley told EcoWatch.

Finding ways to fine-tune the use of sulfur in winegrowing is important for the wine industry to move toward more eco-friendly practices.

“There is a lot of interest in sustainable farming in the California wine industry. Winegrowers want to protect the environment, which is conducive to growing grapes, for years to come,” Hinckley said to EcoWatch. “Hence, we have found that many are receptive to discussing ways to optimize the use of sulfur as a pesticide — to use enough that it prevents powdery mildew disease, but not too much that it causes negative environmental effects. We need to have trials now that evaluate the optimization of sulfur spraying in winegrapes.”

In order to achieve a more tailored application of sulfur to wine grapes, the technology will need to be more precise.

“Probably the best approach to optimize sulfur applications is to invest in the development and adoption of technologies that do high precision sulfur spraying — spraying that is targeted and responsive to powdery mildew threat, but not broadcast from tractors, as it is now,” Hinckley said.

Hinckley hopes that knowing how much agricultural sulfur is in the environment will assist farmers in adjusting their application of the fungicide.

“This work could help inform the development of technologies that help farmers to choose when and how much they apply, rather than just applying the same amount preventatively all the time,” Hinckley said in the press release.

Hinckley also said consumers can take a more active role in learning the origin and cultivation methods of the grapes that were used to make their wine.

“For wine consumers, it’s great to get to know how those grapes were farmed and where they came from. And there are growers who are really trying hard to be as light as they can on the land, and to work with and adapt to the changes that they’re facing with climate change,” Hinckley said in the press release. “There is a role for the consumer to help drive those decisions.”

Hinckley’s goal is to help farmers work sustainably and in harmony with the environment.

“My objective as a scientist is to always work in partnership with the landowners and with the farmers. My hope is that we can reach a place where they’re able to continue in a very sustainable way that also protects the surrounding environment,” Hinckley said.

Hinckley believes that, in the future, the application of sulfur to wine grapes will be done more carefully and include more oversight.

“I think that the future of sulfur in winemaking will involve regular monitoring for powdery mildew disease and risk, and then adaptive spray programs with tractors that can target applications to where vines need it most,” Hinckley told EcoWatch.

Supermarket Food in the UK Could Soon Have Eco-Labels
What if when you went grocery shopping, the food and
By Cristen Hemingway Jaynes
Scientist 'Scared' to See Evidence That Climate Change Worsens Infectious Diseases
Climate change is already worsening the impact of infectious diseases,
By Climate Nexus
The UN Just Declared a Universal Human Right to a Healthy, Sustainable Environment – Here’s Where Resolutions Like This Can Lead
By Joel E. Correia
By The Conversation