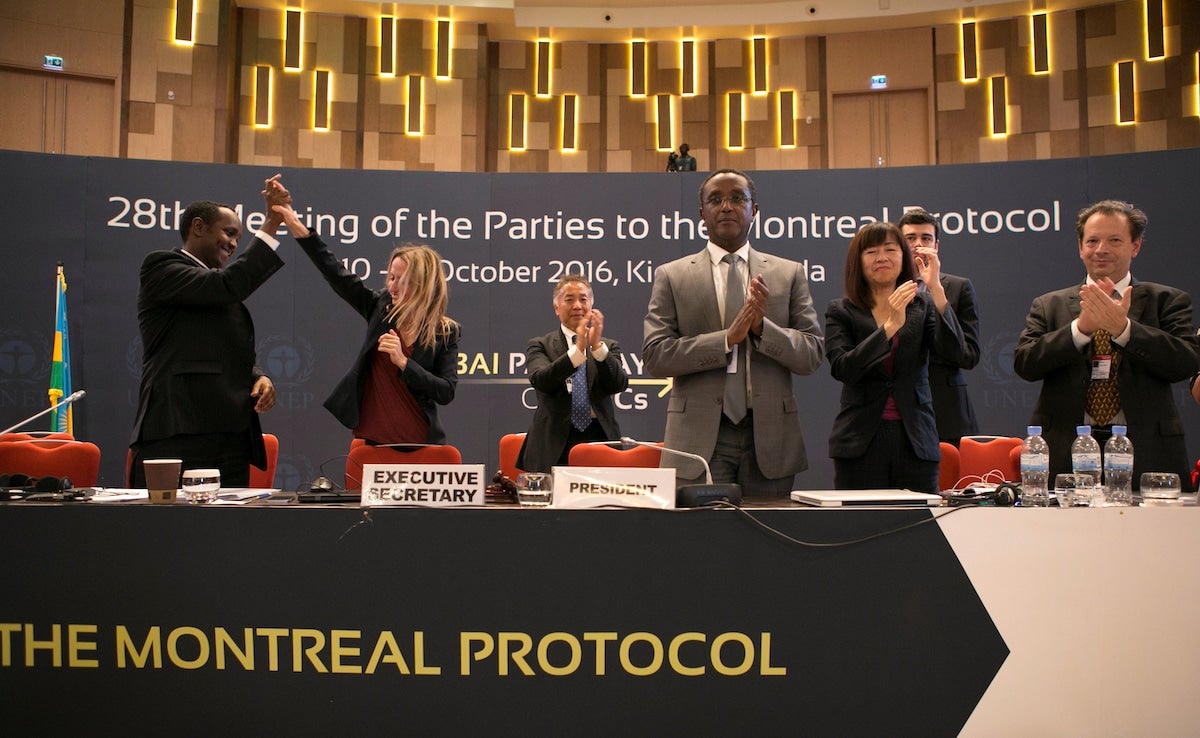 The 2016 adoption of the Kigali Amendment in Rwanda. CYRIL NDEGEYA / AFP via Getty Images

The U.S. Senate ratified a treaty Wednesday that could prevent half a degree Celsius — or a full degree Fahrenheit — of global warming by 2100.

The legislative body voted 69 to 27 to approve the Kigali Amendment to the Montreal Protocol. The agreement, which has been ratified by 137 other countries so far, would end the use of climate-warming hydrofluorocarbons (HFCs) that are 1,000 times more potent than carbon dioxide. It is also the first international climate treaty the U.S. has joined in three decades, The New York Times pointed out.

“Ratifying the Kigali Amendment along with passing the Inflation Reduction Act is the strongest one-two punch against climate change any Congress has ever taken,” Senate Majority Leader Chuck Schumer (D-NY) said in a statement, referring to a landmark act passed in August that earmarked $370 billion for climate and energy programs.

The Kigali Amendment is the latest step in an international attempt to find a way to refrigerate without harming the planet. In the 1970s, scientists discovered that common air conditioner and refrigeration chemicals known as chlorofluorocarbons (CFCS) were actually thinning the ozone layer that protects Earth from the sun’s harmful ultraviolet rays, according to the U.S. Department of State. To prevent this, world leaders finalized the Montreal Protocol in 1987 to phase out the use of CFCs and other ozone-depleting substances. It was the first global treaty to be signed by every nation on Earth and has been called the world’s most effective and successful environmental agreement.

However, solving one problem led to another. Manufacturers began to replace CFCs with HFCs, which do not deplete the ozone layer but do contribute to the climate crisis and could represent seven to 19 percent of greenhouse gas emissions by 2050, according to the UN Environment Programme (UNEP).

One one hand, U.S. ratification of the treaty is largely symbolic. That’s because Congress passed the American Innovation and Manufacturing Act in 2020, which empowers the U.S. Environmental Protection Agency to regulate HFCs with a goal of cutting the production and importing of the chemicals by 85 percent in the next 15 years, The New York Times explained. On the other hand, the importance of the vote’s symbolic value should not be dismissed.

It also shows that the U.S. — which helped negotiate the amendment during the end of the Obama administration but withdrew from the Paris climate agreement under Trump — is back on the international climate bandwagon.

“The United States is back at the table leading the fight against climate change,” President Joe Biden said in a statement following Wednesday’s vote. “As more countries join the United States in ratifying this amendment, we can prevent up to half a degree Celsius of warming this century, a significant contribution to fighting climate change and protecting communities from more extreme impacts.”

The ratification of the Kigali Amendment is hopeful and unique as a U.S. climate action in two other ways. It earned bipartisan support and it was backed by the business interests impacted by the decision. Republican Senator John Neely Kennedy of Louisiana was actually the lead sponsor of the 2020 act phasing out HFCs, and the ratification was backed by both the Chamber of Commerce and the National Association of Manufacturers, according to The Washington Post.

“Businesses supported it because it drives American exports; climate advocates championed it because it will avoid up to half a degree of global warming by the end of the century; and world leaders backed it because it ensures strong international cooperation,” U.S. climate envoy John F. Kerry, who also helped negotiate the deal in Rwanda, said in a statement reported by The Washington Post.