In this guide on the Generac PWRcell, you’ll learn:

We work with a panel of solar experts to create unbiased reviews that empower you to make the right choice for your home. No other solar site has covered renewables as long as us, which means we have more data and insider information than other sites. Our rankings are never affected by revenue or partnerships.

Generac has been a titan of backup power generation for residential, commercial and industrial projects for over 50 years. Specializing in generators, Generac has had a product line-up running on gasoline, diesel or various forms of natural gas to provide home backup power.  In the late 2010’s Generac unveiled its newest line of innovative clean energy storage products designed to store and manage home energy.1

At the head of this clean energy product fleet is the Generac PWRcell, a powerful battery designed to pair with rooftop solar panels.  This product is one of the most exciting solar batteries on the market and comes with a number of features that make it an alternative to the Tesla Powerwall, arguably the most well-known battery of its kind.

How Much Does the Generac PWRcell Cost?

The Generac PWRcell battery has a floor price of $10,000.  One of the biggest benefits of the PWRcell is its scalability, meaning it comes in several different sizes based on your energy needs. We go into more detail about this further  down.

Expect costs to increase from $10,000 as you scale your system up. $10,000 will get you the minimum 9 kWh system (still an excellent figure). From there, each 3 kWh battery module you add to your cabinet will cost around $2,000.

Here’s a quick look at some specs to compare between the PWRcell and two other top batteries: the Tesla Powerwall 2 and the Enphase IQ Battery 10:

The Generac PWRcell has greater efficiency than either the Powerwall or the Enphase. This means that during the conversions between the solar panels, inverters and battery, the Generac system loses the least amount of electricity along the way.

How Does the Generac PWRcell Work?

The Generac PWRcell is a solar home battery designed to store backup electricity produced by a solar panel array and manage that energy for use at a later time. Energy storage systems like the PWRcell have become a reliable method for homeowners to maintain power during outages.

Storage systems also allow homeowners to use their stored energy (instead of pulling from the grid) when rates are at their highest during peak hours of the day, lowering electricity costs.

The battery function is only a part of the picture with the Generac PWRcell. It also acts as a central hub for your home’s energy and comes with a complete clean energy system. In addition to storing your energy, the Generac PWRcell system:

What Are the PWRcell’s Main Components?

The Generac PWRcell is a beast of a battery; we’re referring not only to its raw power, but to its incredible array of functionalities and components as well. Between its battery cabinet, inverters, intelligence, and management and monitoring capabilities, the PWRcell can perform just about any task you need it to.

The PWRcell is a complex battery — but learning to capitalize on it can transform the energy management of your home. If you’re considering the PWRcell, it’s best to familiarize yourself with each aspect of the system.

The PWRcell battery cabinet contains the central lithium-ion battery modules of the PWRcell system. The enclosure is designed to fit configurations of any size based on the scale of backup power desired.

A huge benefit of the PWRcell system is that you can upgrade an existing battery cabinet with additional battery modules to provide backup between the range of 9 kWh (kilowatt-hours) to a whopping 18 kWh, one of the largest capacities among residential and commercial batteries (technically, it’s only 8.6 kWh and 17.1 kWh, but Generac rounds up for simplicity).

This scalability is invaluable when the energy usage of your home can change over time.  The Outdoor Rated (OR) cabinet allows for either indoor or outdoor installation in any climate, adding more flexibility to your project.

This also makes the PWRcell an excellent choice for off-grid solar projects. The battery cabinet is what allows the scalability — it can store between nine and 18 kWh of energy using between three and six three-kWh battery modules if needed.

The PWRcell inverter integrates the batteries with your solar array. Inverters are essentially the bridge between the solar system and the battery storage system, converting solar energy into electricity and redirecting it from there.

The inverter is capable of managing your energy in a number of different user-selectable modes. The modes will depend on the energy needs of your home, but include battery backup power, self-supply, time-of-use, zero-import and export-limiting.

The intelligence of PWRcell inverters allows you to manage your home energy system with your PWRview web portal and mobile app, where you can monitor, forecast and customize your whole home’s energy use from a computer, phone or tablet.

Most battery backup systems or generators typically require you to manually transition your home’s energy supply to a backup source, which can be complex and even dangerous when performed poorly. From there, generators have to be set up to provide energy towards specific circuits (think specific systems or appliances — do you want to keep your refrigerator powered? HVAC system?)

Automatic Transfer Switches (ATS) are a key aspect of the PWRcell that make it easy for homeowners to smoothly transition from the electrical grid to their whole-home backup power. From there, homeowners can use their PWRcells to manage the use of the energy their solar panels generate, directing it towards their priority appliances or systems.

Generac’s Smart Management Modules (SMM) manage the PWRcell’s power levels to prevent overload. When used in tandem with the PWRcell’s ATS system, the power system can intelligently and safely manage up to eight circuits in your home at a time. This is what makes the PWRcell so effective at intelligently managing power even during an outage.

As we’ve mentioned, the PWRcell solar battery has incredible capabilities. But where do you start? We wouldn’t expect an average homeowner to know what a management module is, or what the role of a transfer switch is in load management. 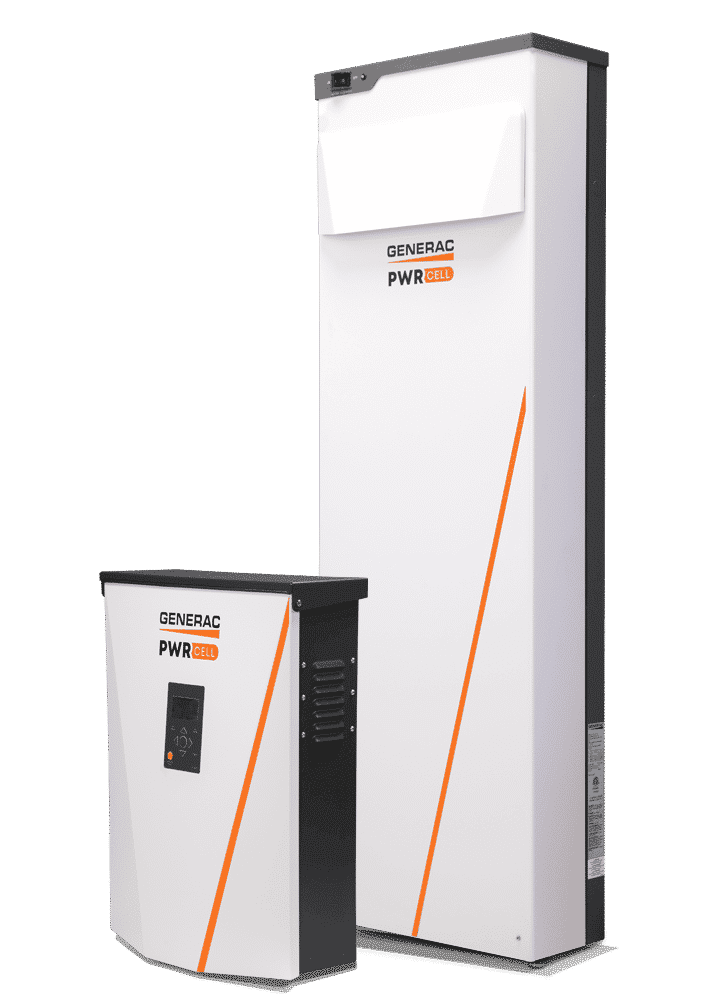 Does Generac Offer a Warranty for the PWRcell?

Unlike solar panels, which have around a 25-year life expectancy, solar batteries typically need to be replaced every 10 to 15 years. As a result, most solar batteries come with a warranty lasting ten years.

The PWRcell 17 — with six battery modules — is valid for either 10 years or the amount of time it takes to cycle 17.3 MWh (megawatt hours) of energy through the battery (another way to describe how intensively you use it).  Most similar products have a 10-year warranty which guarantees a certain number of recharges, as opposed to Generac’s guaranteed energy yield.

Can the Generac PWRcell Help You Go Off-Grid?

To go fully off-grid you would probably need more than one PWRcell. The base model of the PWRcell has a nine kWh capacity, which is capable of powering larger loads in the home including HVAC, refrigeration and other appliance functions. Although a single PWRcell fully loaded with six battery modules has a capacity of up to 18 kW, it’s unlikely a home would be able to continually power itself fully on solar power without a second battery.

The PWRcell can of course be recharged and used as off-grid backup power in the event of a public power outage. It offers automatic load management, letting you customize the parts of your home that receive backup electricity during a grid outage. The PWRcell’s battery cabinet is also designed for outdoor use in multiple climates, making it an excellent candidate for projects that are truly off-grid and exposed to the elements.

If you’re interested in going off the grid you should first check with your local jurisdiction. In some cities, it isn’t legal for you to fully disconnect from public power.

Is the Generac PWRcell System Right For You?

The Generac PWRcell offers one of the best home energy solutions for solar backup on the market today — its unmatched power, intelligence and scalability make it capable of providing safe and reliable off-grid power for critical electricity needs and effectively avoiding high peak energy costs. However, that doesn’t make it the right choice for everyone. The biggest drawbacks of the PWRcell are:

We always like to counsel our readers that solar batteries are not a casual acquisition — they are complicated devices that require an understanding of how to utilize them. That being said, if you’re willing to commit to learning the ins and outs of the PWRcell, it’s one of the best batteries money can buy.

These are the most common questions we receive from homeowners about the Generac PWRcell. If you have a specific query, you reach out to our solar power experts at solar@ecowatch.com.

The Generac PWRcell will last around 10 years depending on how frequently you use it. The warranty of the battery is valid for either 10 years or the amount of time it takes to cycle 17.3 MWh of energy through the battery.

The PWRcell can certainly be used as a source of backup energy for your home during a power outage. Providing backup power has been a core purpose of Generac power systems for decades and the PWRcell upholds the company standard where using solar power is concerned.

The PWRcell can be installed inside or outside in any climate. The battery cabinet of the PWRcell is Outdoor Rated (OR), meaning it’s compatible with most installs under nearly all conditions. The flexibility of PWRcell installations is one of this battery’s key benefits.  If you plan to install it inside, you should know that the PWRcell is nearly six feet tall and requires a decent amount of wall space.

Reviews of Other Solar Energy Products