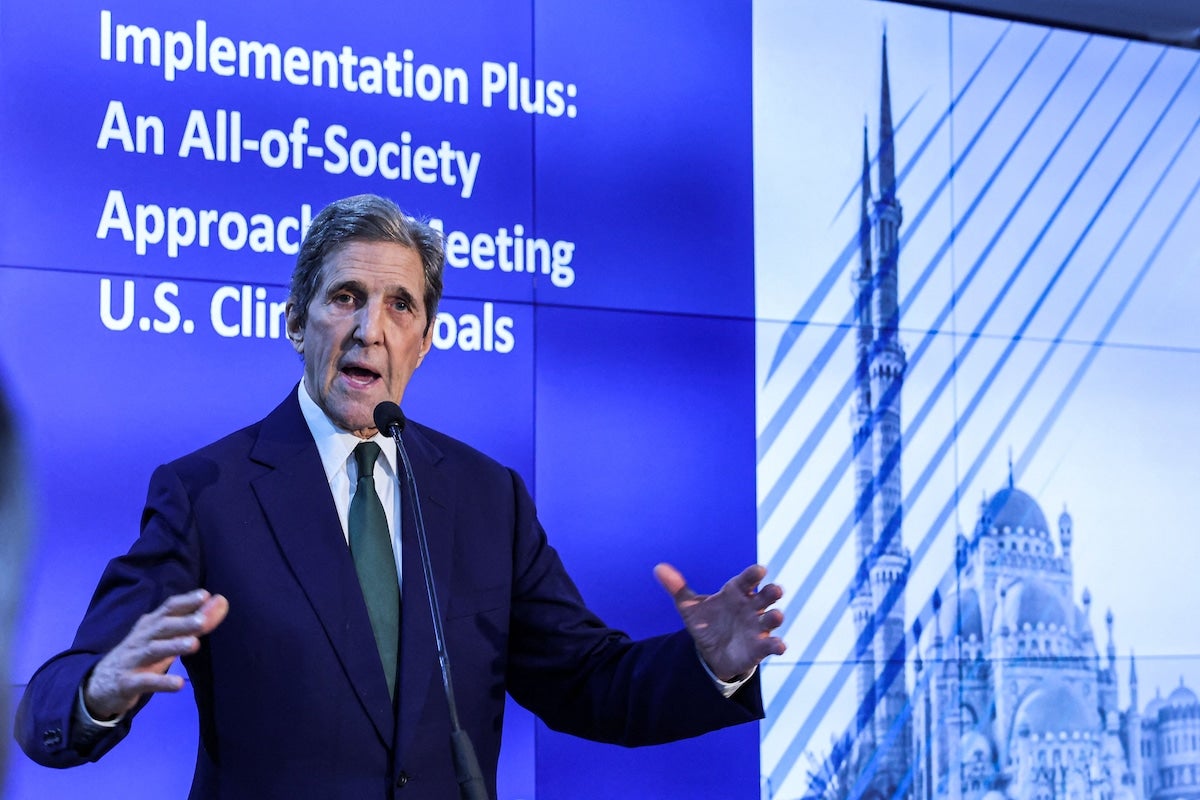 John Kerry, who has been mobilizing for a plan for private companies to fund the renewable energy transition, speaks at COP27. AHMAD GHARABLI / AFP via Getty Images

The U.S. is set to unveil a plan at COP27 for private companies to fund the renewable energy transition in exchange for carbon credits.

U.S. president Joe Biden’s climate envoy John Kerry has reportedly been speaking with private companies and national governments to build support for the idea. It is slated to be announced at the UN climate conference in Sharm el-Sheikh, Egypt, on Wednesday, people familiar with the matter told Reuters.

“One of the things we’re looking at is the possibility of the private sector, in effect, being enticed to the table,” Kerry said last month, as the Financial Times reported. He added that money would be siphoned “directly into closing down some coal plants and acquiring renewables, which is direct emissions reduction.”

The plan, first reported by the Financial Times on Sunday, would see either regional or national governments amass carbon credits by shutting down fossil fuel infrastructure like coal-fired plants and replacing it with renewable energy. Private companies could then purchase these credits to offset their greenhouse gas emissions. The scheme would be voluntarily and would be certified by an independent entity still to be determined.

The purpose of the plan is to provide an incentive for private companies to help fund the renewable energy transition in poorer countries, The Washington Post reported. Fossil fuel companies would not be allowed to participate, according to Reuters.

The plan has many potential weaknesses. For one thing, carbon offsets are already controversial because they give companies a license to continue polluting without any real guarantee that an equal amount of carbon will be drawn down from the atmosphere to compensate. In this case, a company purchasing carbon credits from a coal plant turned into a wind farm, for example, would only truly offset its emissions if the transformation would not have happened without its assistance.

People familiar with the plan told the Financial Times that it currently lacked the details that would make its offsets mechanism robust.

“[Carbon credits are not] the kind of thing you can have half-baked. The rules matter, the details matter,” the anonymous person said. “There’s no easier way to get people angry than to throw offsets into the mix.”

Another problem with offsets is that they distract from the essential truth that every company and nation needs to get its real emissions as close to zero as soon as possible in order to limit global warming to 1.5 degrees Celsius and avoid the worst impacts of the climate crisis.

However, there is a strong argument in favor of finding a way to get the private sector involved in the clean energy transition in the developing world. Developed nations have still not followed through on their pledge to send $100 billion a year by 2020 to help poorer nations both wean themselves off of fossil fuels and adapt to climate impacts. And actual needs are even greater than that — around $3.8 trillion in investments yearly over the next three years — Biden’s senior advisor on climate change John D. Podesta told The Washington Post. So far, only 16 percent of that has materialized.

“Private-sector capital flows… that’s where the real money is,” Podesta said. “We’re talking billions when the need is trillions. We’ve got to unlock that [private-sector] capacity for people to make investments in building a clean-energy future or else we’ll miss both the development goals and the climate goals.”

On the other hand, many leaders in the Global South are frustrated with the broken promises of their Global North counterparts and are mistrustful of corporate financing.

“Are we really delivering on climate change, or are we delivering on guarantees to ensure profits for the private sector?” Egypt’s lead climate negotiator Mohamed Nasr told the press ahead of COP27, as The Washington Post reported. “The thinking has to change. Investors should be thinking of their climate-positive impacts as part of their assessment of projects and delivery for investors.”