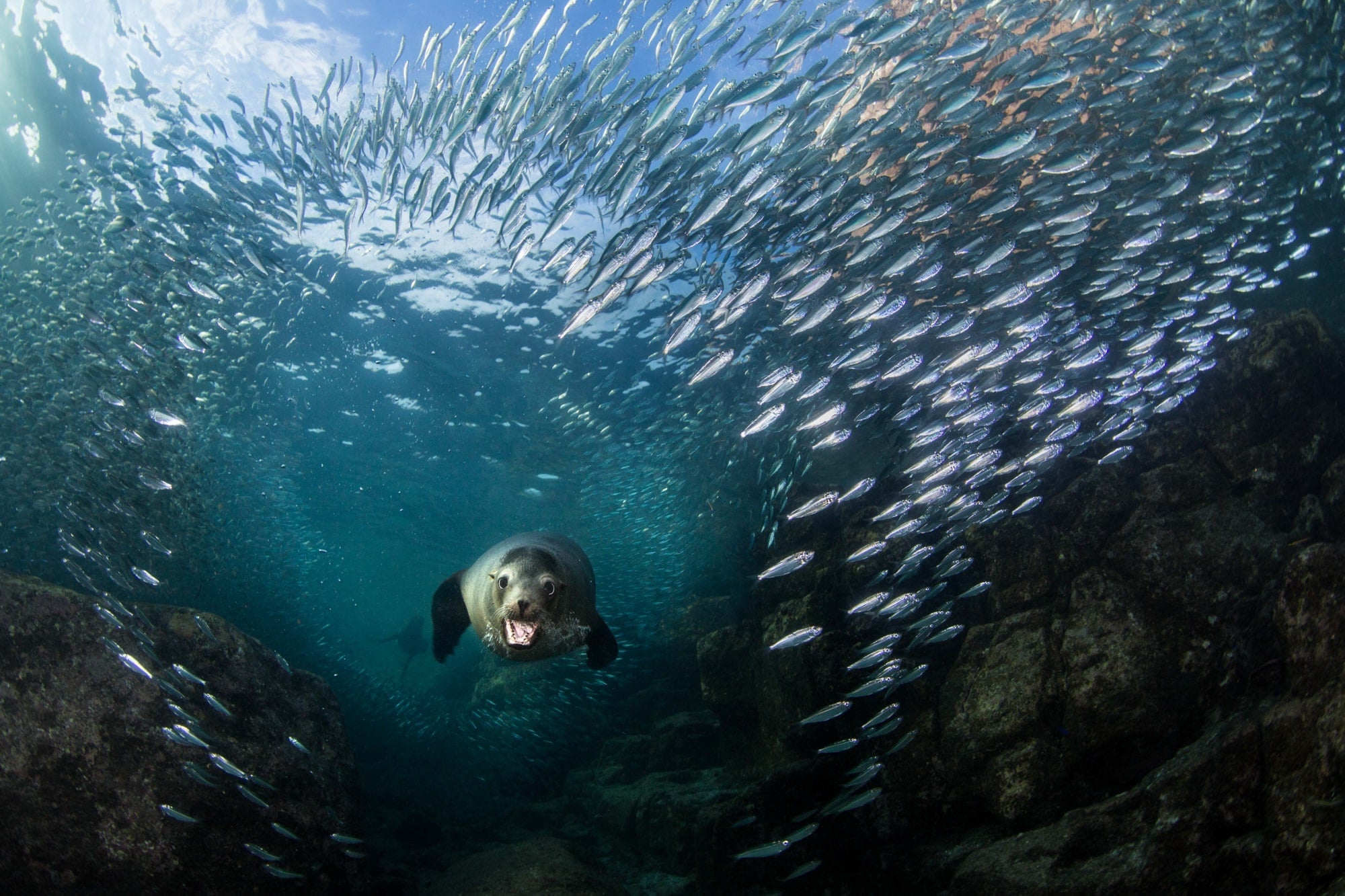 From plastic pollution to coral bleaching, the world’s marine environment is in serious trouble – so much so that UN Secretary General António Guterres was moved to declare an “ocean emergency” at the end of last month.

Against this cresting wave of crisis, what can one person with a camera do? The answer from the judges, artists and organizers of the Ocean Conservancy’s annual photo contest is: a lot.

“To raise awareness we need strong, original, and innovative images that can tell the story and touch [people’s] heart in a single frame,” judge and conservation photographer Daisy Gilardini told EcoWatch in an email.

The ocean conservation nonprofit announced the winners of its annual photo contest in a blog post last Monday, in the latest iteration of a tradition that’s been running 15 years.

“The annual Ocean Conservancy Photo Contest presents a unique opportunity to engage our audience in a fun way,” Ocean Conservancy said in an email to EcoWatch. “We develop relationships with photographers (both professional and novice), opening our network to ocean lovers of varying backgrounds, skills, geographies and experiences. And finally, we get to share this beautiful photography with our ocean-loving community and inspire action on behalf [of] our ocean.”

This year, a panel of four judges picked from more than 1,300 photos to select one Judge’s Choice winner; four winners in the categories Human Impact, Marine Wildlife, Ocean Stories and Spectacular Seascapes; and five honorable mentions. The overall winner was a work called “Surprise,” which was an example of patience paying off for photographer Alexandra Rose. Rose snapped an image of a sea lion barreling through a whirl of sardines while diving in Los Islotes, Panama.

“I desperately wanted to capture one of these pinnipeds blasting through a ball of fish, but it all happens so quickly and, without planning, it’s easy to miss these shots,” Rose said in the blog post announcing the contest winners. “By the end of my dive, after watching this female sea lion swim figure eights around the same rocks, I finally timed it correctly and positioned myself right in the thick of the fish and waited for her to pop through. I think she was a bit surprised to see me!”

A photograph like Rose’s isn’t just a fascinating record of an encounter between human and sea lion, according to the Ocean Conservancy’s judges.

“In our present time, when consumerism, technology, industrialization and urbanization form the foundation of a dysfunctional and unhealthy modern society, we’ve not only lost the ability to connect among ourselves, but we’ve also lost our connection with mother Nature,” Gilardini – who is especially renowned for her images of wildlife from the North and South Poles – told EcoWatch. “In our self-centered lives we no longer feel the sense of belonging, which is fundamental to humankind to care, protect and preserve. In order to rediscover our instinctive, primordial connection with nature, we need to revive that sense of unity and interconnectedness. Images of nature and wildlife help people foster these connections by stirring emotions and empathy that eventually lead to behavioral changes and the way we look at and act with the world. That often includes taking action to protect habitats and endangered species.”

Judge Sirachai “Shin” Arunrugstichai, a Thai photojournalist who is an Associate Fellow of the International League of Conservation Photographers and a National Geographic Explorer, agreed.

“A good photograph can instantly touch the viewers at an emotional level and draw them in to learn something from the information contained in the image,” he said.

Arunrugstichai shared with EcoWatch what he thought made an effective ocean wildlife photograph.

“I think the recipe is the same as all good storytelling images, the composition, the light, and the moment that works together to draw the eyes of the viewers toward the photograph, making them feel something and want to learn more about the story shown in the photo, in this case, the oceans and the inhabitants,” he said. “And to tell a story about something, it would be best to learn about the subject as much as you can, either its behavior or ecology which can help with some narrative, while giving you a better chance to be there at the right moment to work your hardest and pray that you might get some usable image out of it.”

Rose’s winning photograph is a perfect example of a “right moment” image, as are two of the category winners that EcoWatch had a chance to pose questions to.

Angela Farmer, a travel conservation photographer, won the Human Impact category with a photograph entitled “The Hunter’s Trash.” The image shows a seal with a piece of plastic in her mouth, curved almost like a fishing hook.

“I was traveling in the Galapagos and I was struck by this incredibly fragile marine protected area surrounded by predatory fishing boats waiting to slaughter the wildlife that crossed the ‘boundary,’” Farmer told EcoWatch in an email.  “The plastic trash likely came from one of the commercial fishing boats, hence the name ‘The Hunter’s Trash.’”

While the photograph and its title are ominous, the seal had a happy ending. Farmer, who was playing with the seal in the water, managed to hide the plastic from her before she could swallow it, according to the Ocean Conservancy blog. However, the image serves as a reminder of the vulnerability of ocean wildlife.

“We must protect the most fragile ecosystems from destruction,” Farmer told EcoWatch of the message behind her image. “This is a one to one encounter of this beautiful sea mammal with a piece of trash – [it’s] compelling and a metaphor for what’s at stake.”

The End of the World

Another winning category image celebrates the beauty of nature. Kate McFadden snapped “The End of the World” – the Spectacular Seascapes category winner – while enjoying a sunset picnic with her fiance on Montauk, Long Island.

“Little did I know just how stunning this sunset would be that night,” she told EcoWatch. “We were in awe for over an hour watching as the colors changed and just got better and better even after the sun went down. I shot a whole series of photos from that night. It was so beautiful the way the colors of the sunset reflected in the water below and created this picture perfect scene.”

McFadden is a practiced photographer who lives near the water and snaps images of wildlife on her travels as well.

“I just hope that people take time to appreciate the beauty all around us,” she told EcoWatch. “There’s so much craziness in this world, that sometimes you have to remind yourself to take a break, get outside and enjoy the beautiful things this world has to offer. A simple sunset can end in a scene that takes your breath away.”

Other category winners are “Garza al vuelo – Fly Ardea Alba” by Diana de la Vega – which took the Ocean Stories prize with an image of a water bird taking off over Hollywood Beach in Cartagena, Colombia – and  “Rasta Jelly” by Prue Wheeler–which topped the Marine Wildlife charts with an image of the Thysanostoma loriferum jellyfish floating off Western Australia’s Ningaloo Reef.

Honorable mentions went to “Sea otter with discarded can” by Shane Keena, “Schooling Jacks and Turtle” by David Fleetham, “Larval Pearlfish” by Rajiv Bhambri, “Gag or Throttle” by Carmen Cromer and “Wisdom” by Ronald Missick.

Will Paris Ban Electric Scooters?
Could the City of Light ban the electric scooters that
By Olivia Rosane
Arctic Carbon Transportation Route Discovered by Scientists
In the Arctic, a previously unknown carbon transportation route has
By Cristen Hemingway Jaynes
Construction Begins on Maine’s Largest Solar Project
Maine is about to get its largest solar farm, which
By Cristen Hemingway Jaynes