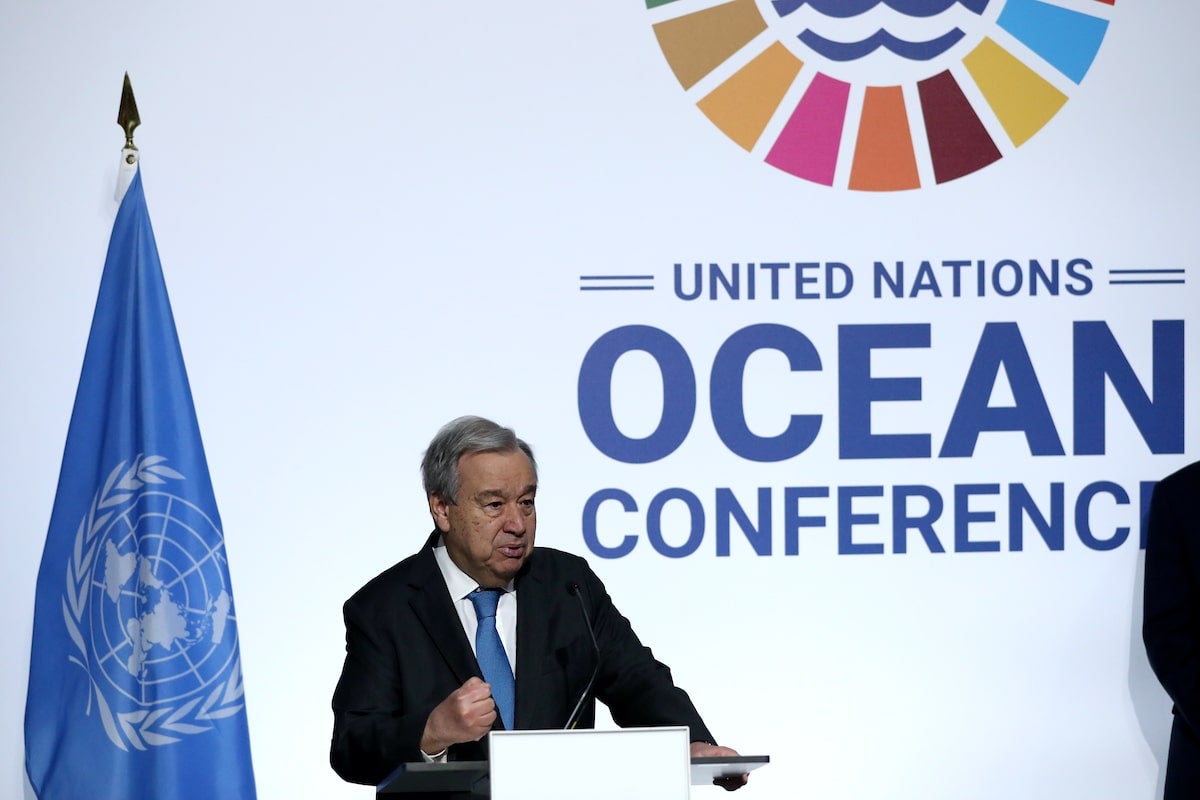 The conference, which is taking place in Lisbon, Portugal, from June 27 to July 1, is an international gathering co-hosted by the governments of Kenya and Portugal with a goal of developing ways to use science and innovation to protect the world’s oceans. And Guterres was clear that it comes at an urgent moment.

“Sadly, we have taken the ocean for granted and today we face what I would call an ocean emergency,” he said, as The Guardian reported. “We must turn the tide.”

Guterres cited many of the challenges human activity has imposed on the ocean, including overfishing, increased flooding of low-lying islands and coastal cities, dead zones caused by nutrient pollution and the proliferation of ocean plastic.

“Without drastic action, the plastic could outweigh all the fish in the ocean by 2050,” he said.
He also criticized world leaders for failing to act to protect the ocean. Currently, there is no single set of laws governing the high seas, AP News pointed out. World leaders have been working on an agreement concerning Biodiversity Beyond National Jurisdiction, or a Treaty of the High Seas, for a decade now, but talks four months ago failed to reach consensus.

“The world’s largest ecosystem… is still unprotected and is dying as we watch,” activist group Ocean Rebellion said, as AP News reported.

A total of 64 percent of the high-seas is not governed by any country, and only 1.2 percent of that is protected, according to The Guardian.

When asked by reporters why he thought an agreement had not yet been reached on an ocean treaty, Guterres blamed “egoism,” as Reuters reported.

“Some people still think they are powerful enough to think international waters should be theirs,” he said.

However, UN Special Envoy of the Ocean Peter Thomson told Reuters he thought a treaty would emerge this year. The next round of negotiations is scheduled for August in New York, according to AP News. However, the conference also presents an opportunity to make progress informally. It will conclude with a non-binding declaration on Friday.

Officially, the purpose of the conference is to promote action in order to fulfill UN Sustainable Development Goal 14: Life Below Water, according to the conference website. The goal focuses on the sustainable use and management of the oceans and their resources.

“To mobilize action, the Conference will seek to propel much needed science-based innovative solutions aimed at starting a new chapter of global ocean action,” the website reads.

In his remarks, Guterres said that sustainable management of the oceans could produce six times more food and four times more renewable energy than the current state of affairs, according to The Guardian. He also endorsed a goal of mapping 80 percent of the seabed by 2030.

The conference will involve around 7,000 people, according to Reuters. Among them are leaders and scientists from more than 120 countries, according to AP News.

Some activists expressed skepticism about the usefulness of the conference.

“Leaders in Lisbon will congratulate each other for how well they’re doing on marine protection, while the ocean crisis deepens,” Greenpeace’s Laura Meller told Reuters. “We don’t need another talking shop, with vague statements and voluntary commitments.”

However, Guterres also said that ordinary people not at the conference had a role to play in making sure an ocean treaty is finally passed.

“We need to make people put pressure on those who decide,” Guterres said, as AP News reported.