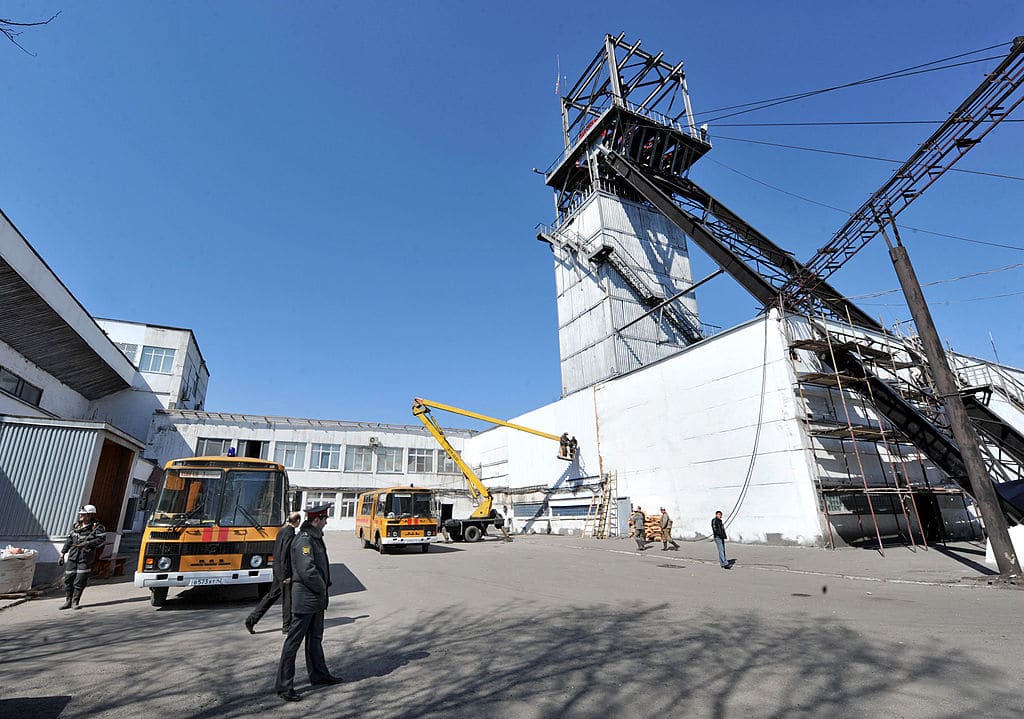 A Russian policeman stands near the Raspadskaya coal mine, in Mezhdurechensk on May 13, 2010. VIKTOR DRACHEV / AFP / Getty Images

A methane leak traced to a Russia’s largest coal mine may be the biggest leak ever of the potent greenhouse gas coming from a single source.

The leak was spotted by GHGSat, a company founded in 2011 that describes itself as the “global leader in high-resolution remote-sensing of greenhouse gas from space.” In a Wednesday announcement, the Montreal-based company said it had detected nearly 90 metric tons (approximately 99 U.S. tons) being spewed from the Raspadskaya Mine in Kemerovo Oblast, Russia, every hour on January 14, 2022.

“This is the biggest source we’ve ever seen,” GHGSat director of energy, landfills and mines Brody Wight said, as The New York Times reported.

GHGSat said that it detected 13 methane plumes from the site in a single satellite pass. Each plume emitted 658 to 17,994 kilograms per hour. If the mine emitted at the same rate for an entire year, it would release 764,319 metric tons (approximately 842,517 U.S. tons) of methane into the atmosphere, or enough to power 24 million homes.

Methane is a concern because it has a warming potential 84 times stronger than carbon dioxide, even though it only persists in the atmosphere for about 20 years. Recent studies have shown that significantly reducing methane emissions could prevent around a quarter of a degree of global warming by 2050, The Guardian reported. More than 100 world leaders pledged at COP26 in Glasgow last November to reduce global methane emissions by 30 percent by 2030, but Russia was not among them.

“Deeply cutting methane is the only sure way to limit near-term temperatures and prevent runaway climate change, yet every month brings new evidence that Russia is hiding the world’s most massive and destructive methane leaks,” Paul Bledsoe of the Progressive Policy Institute in Washington, D.C., told The Guardian.  “Putin is desperately hiding these enormous emissions so he can continue to profit from sales of Russian coal, oil and gas and fund his war-making regime. But those nations like China who continue to buy Putin’s oil and gas are equally abetting his climate and war criminality.”

GHGSat also said that the mining company did not respond when informed of the leak.

“We did reach out to Raspadskaya about their emissions, but so far we’ve not had a response,” Wight told BBC News.

The methane release may be related to safety, since Raspadskaya was the site of a mining disaster in 2010 that saw 66 people killed when methane emissions from coal mining built up and exploded, according to GHGSat.

The mine was still leaking at about a third of the January rate according to the company’s most recent data, The Guardian reported. GHGSat also believed the leak began at least six months before the January incident.

The company said it believed this was the largest methane leak ever traced to one source. It was also around 50 percent larger than any other leak it had recorded itself. For comparison, the largest U.S. methane leak took place in October, 2015 in Aliso Canyon, near Porter Ranch, Los Angeles, GHGSat said. It spewed methane at a rate as high as 58 tons per hour, lasted four months and had a larger carbon footprint than the Deepwater Horizon oil spill.

“This is a really big fish,” Environment and Climate Change Canada research scientist Felix Vogel, who is not associated with GHGSat, told The New York Times of the Russian leak.