Josh Fox: It's Easy to Switch to Renewable Energy 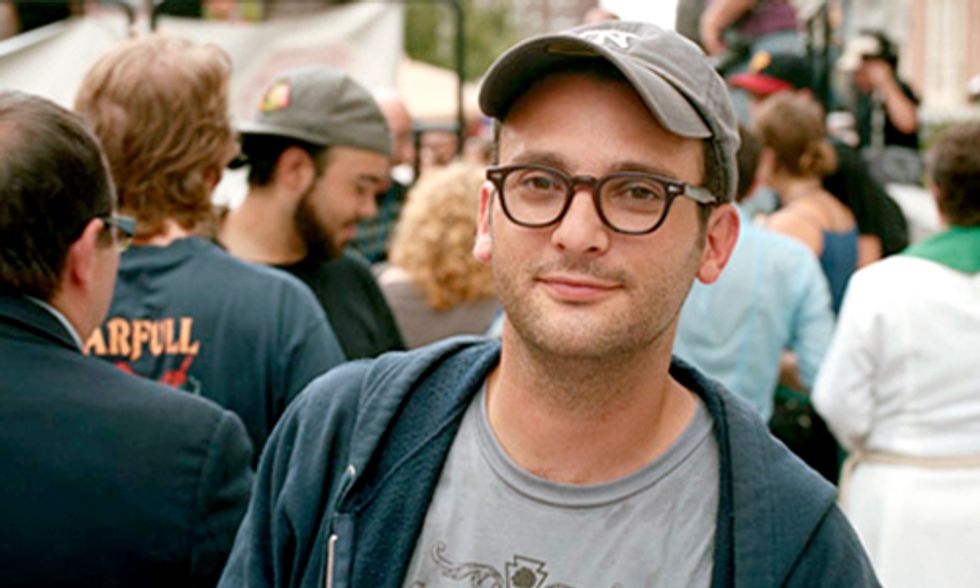 I love documentaries. They are so informative, engaging and inspiring. But I find it's hard to keep those emotions alive days and weeks after watching a film. It would be great if everyone remained as energized by a film months later, as they felt walking out of the theatre. But fortunately there are films like GASLAND that have an everlasting effect and ability to grow an entire movement.

Josh Fox's GASLAND and GASLAND PART II revolutionized the anti-fracking movement and gave people the tools to get educated and fight back.

Now, with the tipping point of the People's Climate March and Fox's Solutions Grassroots Tour, I thought it a perfect time to feature a Q&A with the the NY Yankee hat-wearing-playwright-turned activist.

"Our part in all of this is about getting people to switch to renewable energy. In New York State you can switch your power provider very easily and all of a sudden the electricity that is going into your apartment or your home is no loner from natural gas or coal or oil, it’s from renewable energy sources," said Josh Fox in an interview with Stefanie Spear. Photo credit: Aaron Nutter

SP: What is your biggest hope for the outcome of the People's Climate March?

JF: First of all, I hope that there are a lot of people. I hope that there are a lot of fracking activists there because it’s clear from the science right now, as it’s been pointed out by many people, and most recently by Bill McKibben in Mother Jones, that fracked gas is just as bad for the climate or worse than any other fossil fuel because of all the methane that leaks. So I hope there’s a strong fractivist contingent at the climate march. And I also hope that it makes an impression on people in New York City because New York City is the third most vulnerable city in the world to climate change. After Hurricane Sandy we really saw what kind of damage can happen in New York City so I really hope that it gets people involved.

And of course, our part in all of this is about getting people to switch to renewable energy. In New York State you can switch your power provider very easily and all of a sudden the electricity that is going into your apartment or your home is no loner from natural gas or coal or oil, it’s from renewable energy sources.

Visit solutionsgrassroots.com and click on New York State and there are three different energy companies you can buy renewable energy from right now—Ethical Electric, Pear Energy and Community Energy. We’re not advocating any one company because we don’t want to work for just one company, but we are advocating companies that we think are strong and ethical that we've vetted. So visit SolutionsGrassroots.com today and switch to renewable energy.

SP: Tell me about Solutions Grassroots and your work to get people powered by renewable energy.

JF: Solutions Grassroots started because while doing our GASLAND tour throughout the U.S. with GASLAND PART II, we met face to face with thousands of people and the most prevalent question they had was how can we go renewable? They asked, how can we implement a renewable energy strategy because we’re fighting fracking here, at home, and we want to get out of the fossil fuel cycle? So we researched that question, and what we decided to develop was a new organization that gives people real simple choices and easy information on how to go renewable.

There are a lot of renewable energy companies that are actually the fossil fuel industry in disguise, but at our website we only have the ones that are real renewable energy companies. So if you go there, you’ll see a map of the U.S. and there are options in many states to immediately start to go renewable. If there aren’t options in your state then Solutions Grassroots offers you a grassroots organizing structure so you can start a community team and campaign in your area for renewable energy legislation and progress towards greater renewable energy availability. But right now in New York State, Pennsylvania, all over the East Coast, California, Colorado, Illinois, there are a lot of options to go renewable today. Our goal is to make that information accessible to people.

SP: You provided a great overview about your Solutions Grassroots tour in your recent EcoWatch Insights article, what else can you share that people who can't make the tour might want to know?

It’s also a lot of fun because we’ve been doing things that are positive. And when you fight the fossil fuel industry, fight fracking, fight pipelines, fight Keystone XL, fight mountaintop removal, those fights are very very difficult, long drawn out and negative. Working for renewable energy is a positive community builder, positive economic force, so it really feels good to do it.

SP: The fight against fracking has become a fight for democracy. What advice do you have for the communities that have voted to ban fracking in their communities and then get trumped by state law favoring the interests of the oil and gas industry?

And one of the ways I think we can try to do that is through distributed generation of renewable energy. When you control your own power, when some of your own power is coming from your own backyard, when your power is coming from ethical companies that want to get out of the fossil fuel cycle, or when you can actually go out there and get your friends and neighbors to sign up in ways that support local democracy, as you can do through the Solutions Grassroots website, that’s one way I think to take on the fossil fuel industry, one way to lessen their power within our democracy, make sure they have less money to pollute the political system. Right now there are more than 700 lobbyists working for the fossil fuel industry. That’s more than all of congress. We have to start to tilt the scales and one of the ways that we can do that is stop giving them our money.

[Editor's note: Distributed energy or decentralized energy is energy generated or stored by small, grid-connected (behind the meter) systems with the power generation located very close to the load it serves. Distributed energy systems can be owned by the homeowner or business owner. Conventional power stations, such as coal-fired, gas and nuclear powered plants, as well as hydroelectric dams and large-scale solar power stations, are centralized and require electricity for the energy to be transmitted over long distances Centralized systems are typically owned by large utilities.]

SP: I've been publishing environmental news for more than 25 years and I'm still waiting for us to hit a tipping point where the majority of people in the world are conscious of their impact on the Earth and act each day accordingly. Do you think we're close, and if so, what do you think will get us there?

Now you have people in central Pennsylvania fighting the frackers who are talking about climate change. That was not the case before fracking. So things have changed. And I’m always optimistic, but what I’m really interested in seeing is community democracy, local democracy, community building. I think in my community we definitely hit a tipping point, there’s no question. And I think a lot of that has to do with a response to a threat and community members getting informed on the issues. So I think you have to just keep building and keep getting the word out.

SP: I know you don't have a crystal ball, but I think a lot of people would want me to ask you this: How long do you think the moratorium on fracking will last in New York state?

JF: I think that the people are in control in New York State on fracking. I think that as long as people insist on no fracking in the state, there will be a moratorium. I think it would be politically unwise for any politician in New York, whether that’s Andre Cuomo or the next governor, to decide that fracking is viable in New York because the citizenship has already reached that crucial, critical mass and there will be grave political consequences for any politician who would decide that it’s okay to frack New York.