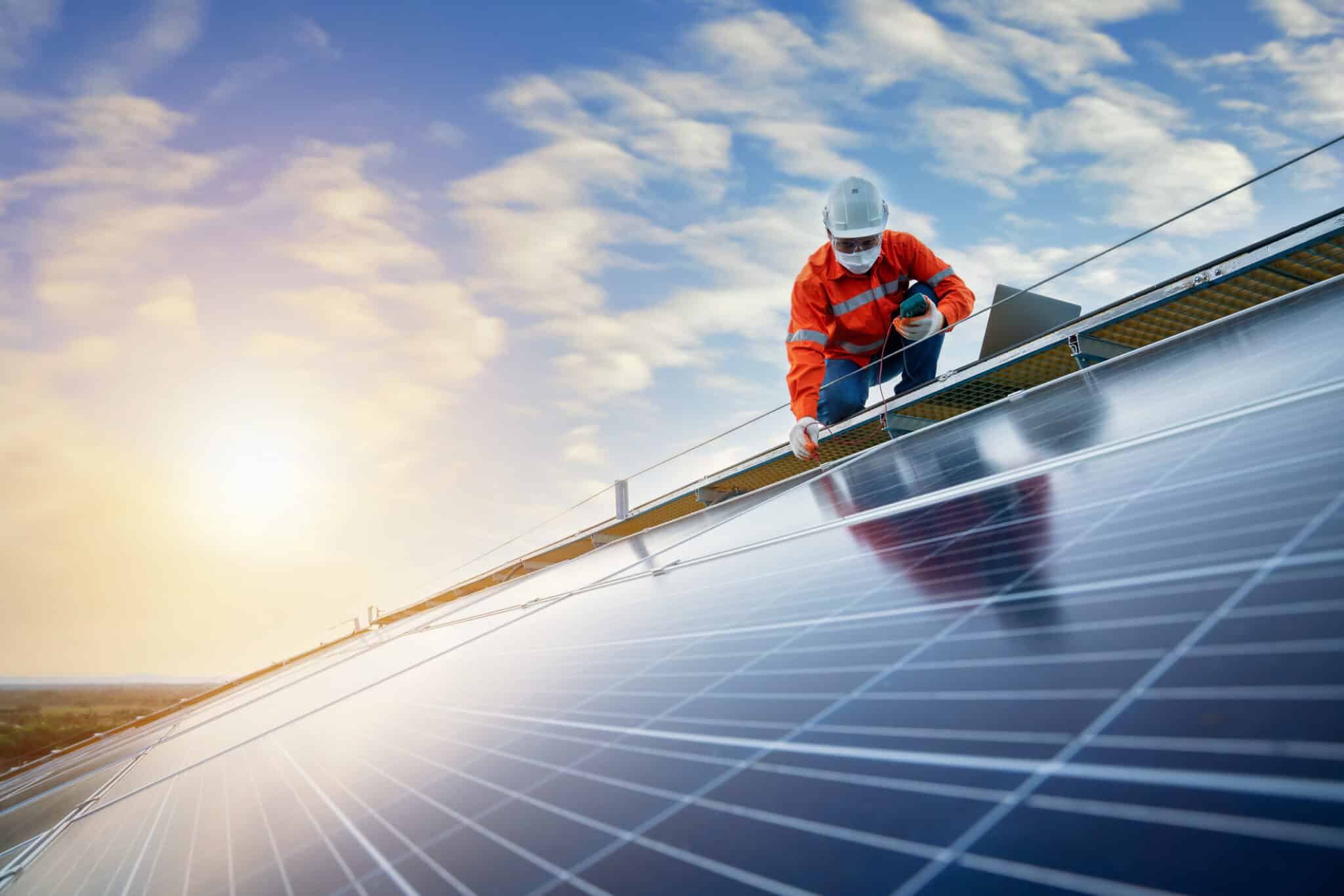 Whether you’ve been refreshing news on the war in Ukraine every hour or just passively hearing updates, you’ve probably felt the impact in some way. Russia’s invasion of Ukraine has caused political, economic and humanitarian crises across the globe. Policymakers worldwide have intensified sanctions on Russian energy exports and have started looking for ways to wean off these sources completely.

As a result of the war, there’s been a spike in searches for “energy independence,” in America, both on a national and an individual level. Some are calling on the government to lessen the market impact that foreign wars have created, while others are wondering how they can become less dependent on government-controlled resources for their household energy needs.

Before we continue to discuss ways to achieve energy independence, we want to say this: It can feel low to complain about the pain in your wallet while many people are fighting for their lives. But in times of war — with country leaders you may or may not agree with making big trade decisions that disrupt the economy — it’s OK to want to make changes to do what’s best for you and your family.

How Much Does the U.S. Rely on Russia for Energy Imports?

Russia is the world’s largest exporter of oil, the second-largest exporter of crude oil and ranks third for both oil and natural gas production.1 So, it’s a really big deal that countries around the globe are cutting off imports from Russia when many of them rely on Russia to power their electric grids. For reference, Russia currently supplies 40% of the European Union’s gas needs.2

For Americans, the “good news” — and we put “good news” in quotes because, of course, the burning of fossil fuels is horrible for the environment — is that the U.S. has been leading the globe in many aspects of energy production over the past decade, relying on Russia for only 8% of crude oil imports.3,4 The U.S. is currently a net exporter, meaning it produces more energy than it consumes.5

However, the U.S. still gets about half of its oil supply from foreign sources according to the Energy Information Administration (EIA).6 Plus, remember that we’re talking about finite resources here. As supplies continue to drop, prices go up, which many of us have felt as we’ve filled up our cars with gas prices averaging over $4 per gallon in most states.7

Perhaps the Russian-Ukrainian war and subsequent global market disruption will serve as a reminder that we — as a nation and as individuals — are still relying on foreign, unstable resources in a volatile market for our most basic needs.

There has to be a better way. And there is — energy independence.

What Is Energy Independence?

In simple terms, being energy independent means not relying on anyone else for energy. On a technical level, the U.S. is currently energy independent because, as we discussed, it exports more energy than it imports. But it hasn’t always been, and with an ever-changing global market, there’s no telling if it will stay this way. You can even see by looking at the EIA chart above that the trend has once again switched directions, as our imports started to rise again in June 2021.8

The U.S. cranked up the production of fossil fuels to achieve energy independence as a nation. But even now, with the nation producing oil at near-record highs, we’re still paying for oil at near-record prices.9 And the blame can’t even be put solely on market disruptors like Vladimir Putin or the COVID-19 pandemic, because we saw global oil prices hit a high of roughly $70 a barrel back in 2015 and 2017.10 So even though the U.S. is producing all this energy, the market is still disrupted, and it’s in the hands of the Organization of the Petroleum Exporting Countries (OPEC).

That doesn’t really sound like energy independence, does it?

While you can’t really control what goes on in the White House, you can take better control of what goes on at your house. If you create your own clean electricity through renewable sources — like solar, hydro or wind power — you’ll depend less (or not at all) on your local energy company.

How To Achieve Energy Independence With Solar

Numerous studies have shown that transitioning to renewable energy alternatives is the best way to achieve energy independence. For example, every electric vehicle that takes place of a gasoline car on the road saves around six barrels of oil every year, and using heat pumps reduces the need for natural gas.11

When it comes to producing electricity, hydro, wind and solar power are the most practical solutions. While Congress is discussing clean energy and climate provisions to reduce the demand for natural gas and oil, it’s looking at long-term solutions. In the meantime, the government is trying to incentivize Americans to make the switch to clean energy on their own.

What You Can Do To Become Energy Independent

Although there are several renewable energy sources, most are impractical for the average homeowner. We don’t anticipate anyone will run out to install a wind turbine in their backyard after reading this article, but installing solar panels is a common way homeowners can achieve energy independence.

Now, we have to be clear about this: Unless you install an off-grid solar panel system (which is common in rural areas), you won’t be able to completely unplug from your utility company.

Many local governments require solar systems to connect to the grid, mainly because most solar panel systems produce more energy than your home needs. Energy is fluid, which means it needs somewhere to go when it’s not directly being used to power your home. If your utility company has a net metering program, you’ll get paid or earn credits for the energy you provide, helping you save money on your utility bills or help offset the cost of solar panels.

While producing your own clean energy and capitalizing on solar incentives sounds nice, it’s not exactly energy independence. When your solar panels are not producing energy (at night, during bad storms, etc.), you’ll still be relying on electricity from the power grid (albeit, much less than you do without solar panels).

The Importance of Home Energy Storage

Having an energy storage system allows you to store all the excess power your panels produce in a solar battery. You can use the energy in the battery when your panels aren’t producing, so you won’t be relying on the grid to power your home.

It’s widely understood how having a solar energy storage system would helpful during poor weather conditions or at night when solar panels aren’t harnessing the power of the sun. But what many people don’t realize is that having a solar battery is important even when the weather is ideal for solar panel power production. If your local electric grid is down, your solar system will shut down, too, because it has nowhere to send its excess energy and it can be hazardous for the technicians working to restore the power.

In simpler terms, having both a solar panel system and a solar battery is the closest you’ll get to being energy independent without being fully off-grid.

Not only will that prevent you from having to rely on a finite energy supply and a volatile energy market, but it also allows you to have better control over how much you’re spending every month. As your neighbors’ energy rates rise and fall with the market, your electricity costs will stay mainly the same.

Is Solar the True Future of America’s Energy Independence?

After all that talk about the advantages of solar, you may be surprised to hear us say that solar still has a long way to go before being the answer to America’s energy independence. It’s never going to be the sole source of energy for the country, and it presents other supply issues when you factor in the materials made to create solar panels. But solar, combined with wind and hydropower, could bring America to energy independence.

On an individual level, solar is a much more practical solution, but unfortunately, it’s not going to be the answer for every homeowner. To support an effective solar system, roofs have to be a certain size, in a certain condition and facing a certain way. If not, there’s the possibility of installing a ground-mounted solar array, but again, it depends on yard size and the amount of direct sunlight the panels could receive.

Solar is also very location-dependent, and not just because of weather. If your state or city doesn’t have solar-friendly policies, you may have high feed-in tariffs or low buyback rates for your energy, making it less worth it to go solar.
That said, you won’t know unless you try. Creating and storing your own energy is the only way you’d truly be able to achieve energy independence for your home. If that’s your ultimate goal, we recommend you talk with a local solar company to find out if installing solar panels is right for you.