What is Google Project Sunroof and Is It Accurate? [2022 Guide]

Here are the key questions we’ll answer in this article:

Interested in switching to solar energy? EcoWatch has vetted the top most reputable solar companies in America and is often able to secure better rates for our readers. Click one of the links below if you’re ready to get connected.

What Is Google Project Sunroof?

Google’s Project Sunroof is a free online tool that helps homeowners calculate solar energy potential based on their roof structure and local weather patterns. It was created in 2015 by a group of Google Engineers led by Carl Elkin.

Project Sunroof can calculate the sun’s path to give an accurate account of your solar situation. It then uses industry-standard models to tell you the cost-benefit analysis of going solar so you can decide if it’s worth it. In 2017, the tool added a feature that also shows you nearby homes that have installed solar energy systems.

Currently, the Google Project Sunroof data explorer is only available in the U.S. and Germany. 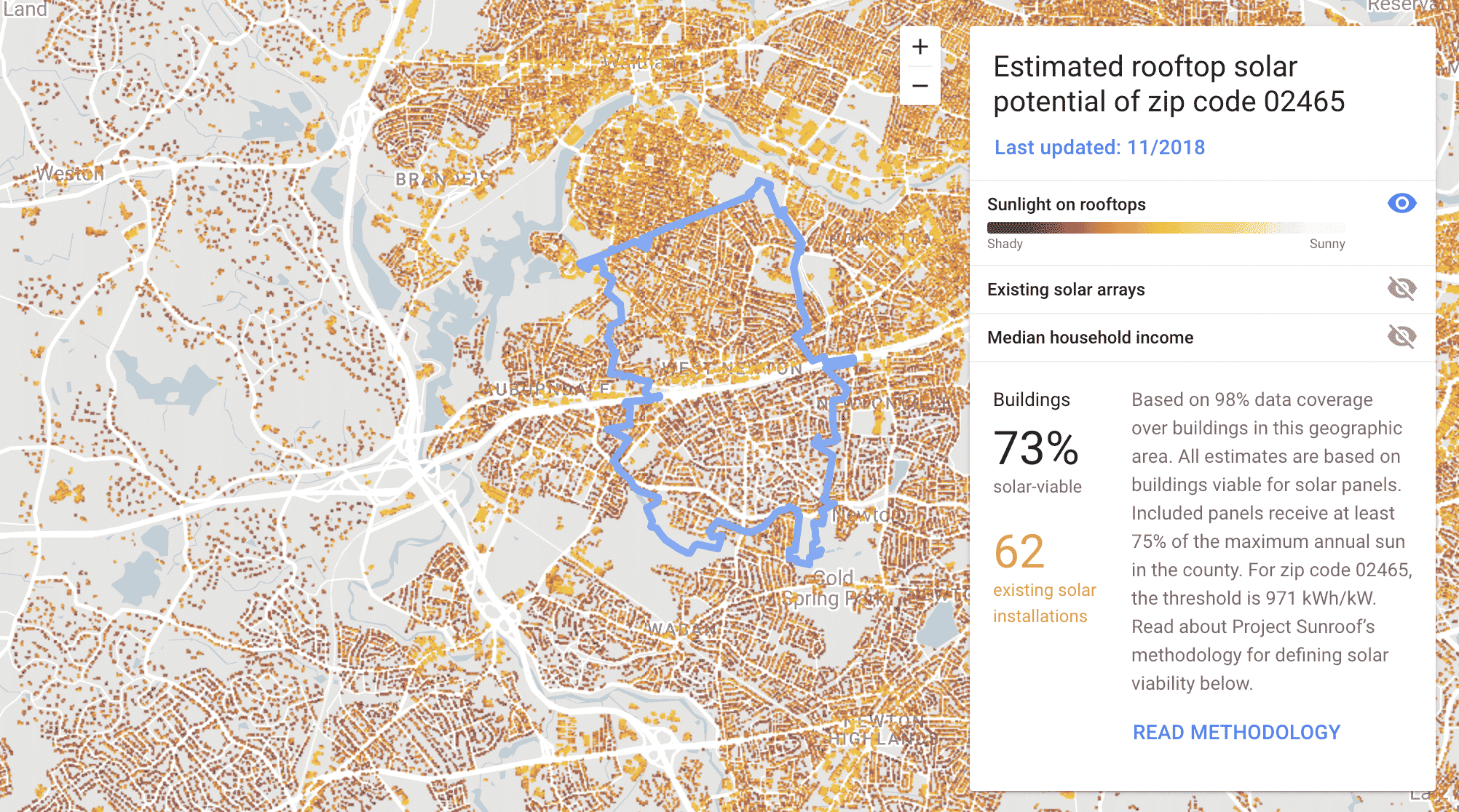 How Does Google Project Sunroof Work?

Project Sunroof is a smart tool using satellite imagery, 3D modeling and shade calculations from a combination of Google Maps, Google Earth and machine learning technology. However, Google doesn’t work alone in this.

According to its website, Project Sunroof also uses weather and solar savings data from the National Renewable Energy Laboratory (NREL), as well as utility electricity rates, solar costs and tax credit data from other third-party sources.1

Additionally, a machine learning algorithm is trained to recognize solar panels from satellite images and obtain information about which buildings are already using solar panels.

How to Use Google Project Sunroof For Your Home 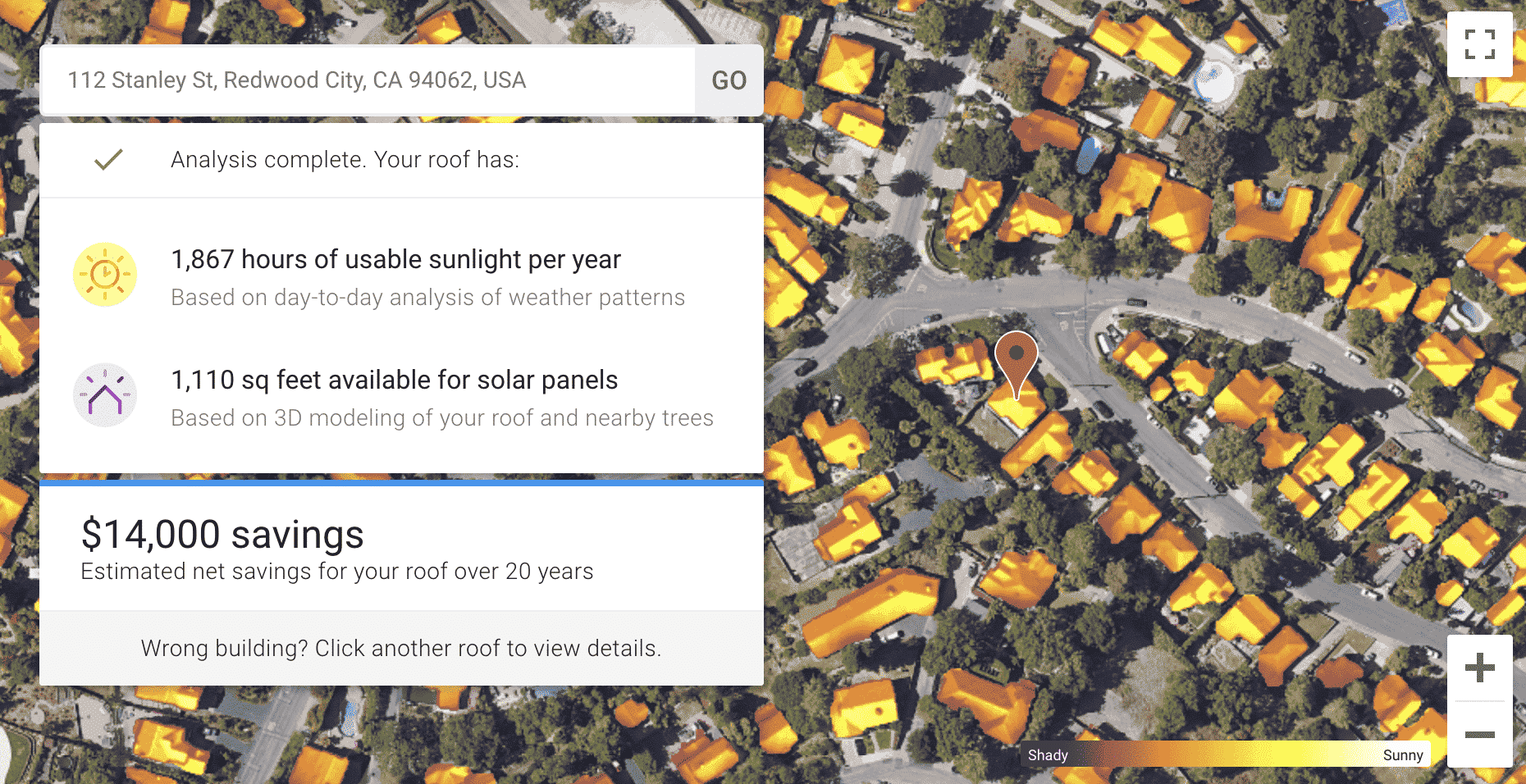 Google Project Sunroof is pretty user-friendly. You can get a quick, personalized solar analysis for your home with just three simple steps:

How to Use Google Project Sunroof For Your City

Another function Google’s Project Sunroof offers is the ability to see solar data for an entire city. For example, in Fresno, California, 96% of rooftops are viable for solar. If all were to reach solar capacity, the carbon offset would be equivalent to taking 278,000 cars off the road each year or planting 21.3 million trees.

How Accurate is Google Project Sunroof? 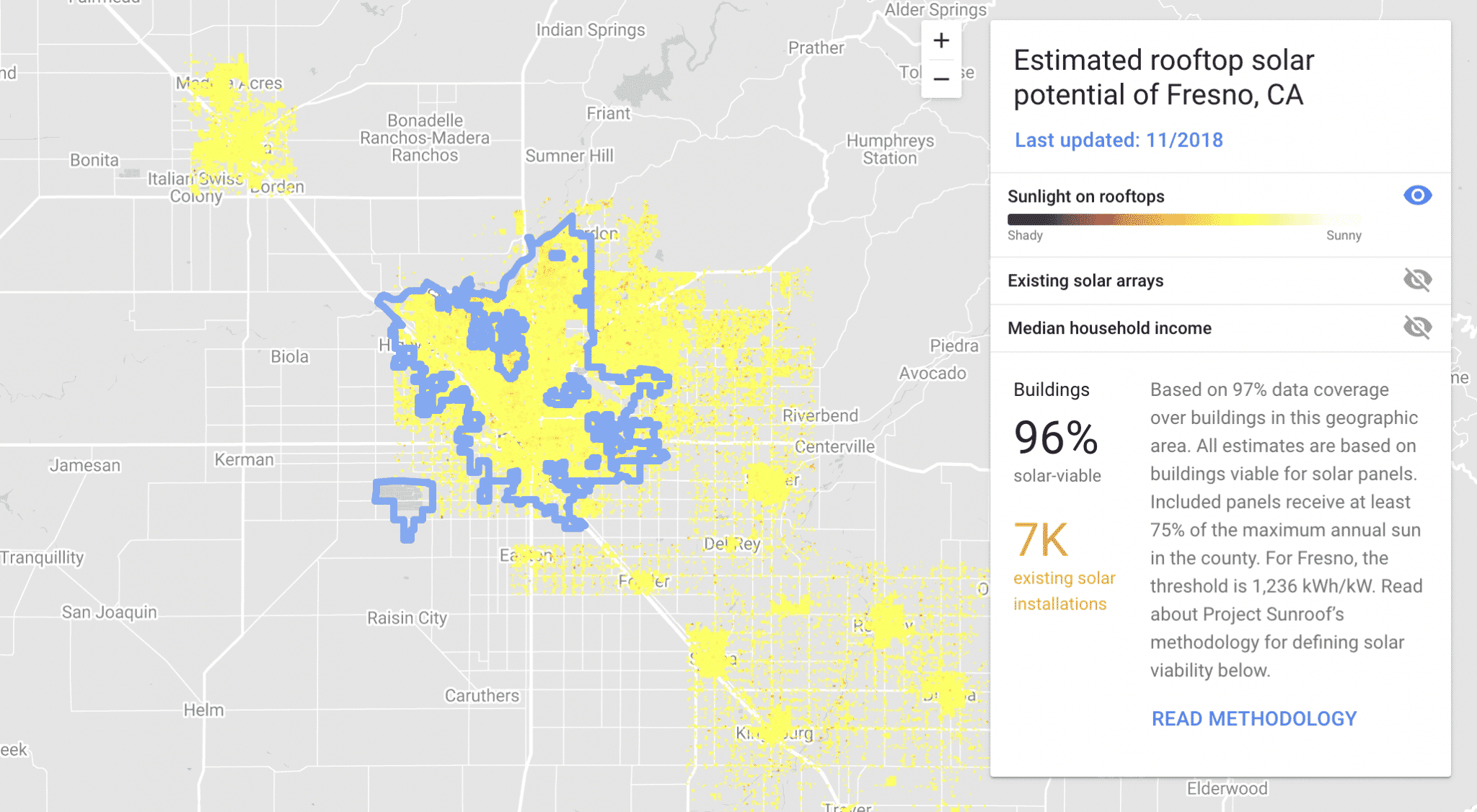 When it comes to solar potential analysis, Project Sunroof is a helpful tool. However, we’re a little wary about its accuracy when it comes to solar costs and incentives. We say that because — as noted in this screenshot and confirmed by its changelog — a lot of Project Sunroof data hasn’t been updated since 2018.2 Solar prices and incentives vary a lot over the course of a year — never mind four years.

For example, Google estimates that a solar system in Houston, Texas, would be about $24,000 after applying the federal solar tax credit.3 Using internal solar data from 2022, EcoWatch found the average cost of a solar system in Houston to be about $15,228. The discrepancy is likely because the cost of solar in Texas has dropped over the past few years.
While solar calculators are helpful, the only way to get an accurate solar estimate for your home is to get a quote from a certified solar provider.

Here’s the thing: Google Project Sunroof is a great tool, but if you’re looking to install rooftop solar panels, we recommend using other resources along with Project Sunroof.

Google Project Sunroof provides helpful information to prospective homeowners about solar potential and the feasibility of adding a solar system. Project Sunroof is a completely free resource, and Google claims it doesn’t make any money off of the tool, which means its sole purpose is to accelerate the growth of solar power to help mitigate carbon emissions. That’s something we can get behind.

Just to give an example of the impact this tool has had, one of the largest rooftop solar installations in Houston was prompted by Project Sunroof naming Houston the “most promising city in the U.S. for solar potential.”4

While Google Project Sunroof has great intentions and features, it’s not without its flaws. For one, Project Sunroof is also only helpful for those looking for rooftop solar panels and doesn’t provide any data for ground-mounted solar systems.

In our opinion, the biggest flaw of Project Sunroof is that a lot of its information is outdated. As we mentioned earlier, much of the app has not been updated since 2018, but solar energy has become more accessible and affordable since then. As such, Google’s quotes are likely higher than that of a solar installation company near you.

Lastly, Google Project Sunroof cannot connect you to a local solar provider. If you’re interested in getting a free quote for your home solar project, click below. 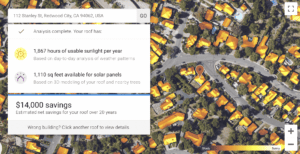