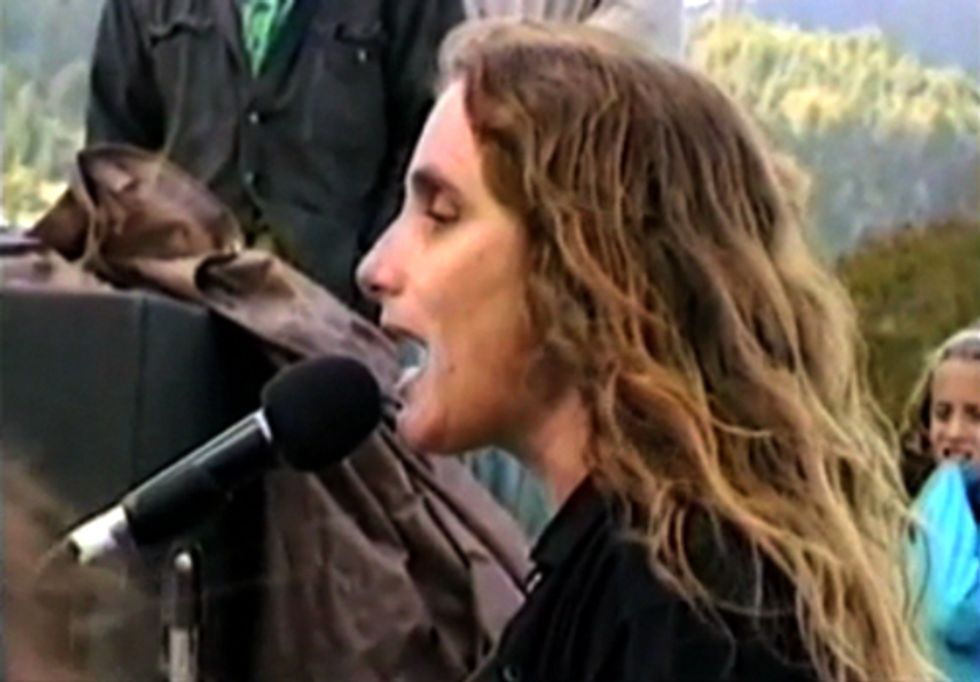 In a time of tremendous disregard for the environment where corporations are controlling the government and rewriting environmental policy to suit their needs,the new documentary Who Bombed Judi Bari? shows how activists can take on the powers that be and win, though at a great cost.

On May 24, 1990, forest activists Judi Bari and Darryl Cherney were driving from Oakland to Santa Cruz, CA to promote Earth First!'s Redwood Summer—a mass mobilization of students and others from across the U.S. to protest the deforestation of the redwood region in Northern California—when a shrapnel-wrapped pipe bomb went off under Bari's driver's seat, nearly killing her and injuring fellow organizer Cherney. If the assassination attempt on Bari wasn't traumatic enough, immediately following the explosion the duo was arrested with possession and transportation of explosives, with the media reporting that they accidentally bombed themselves.

Seven years after the bombing, and just 30 days before Bari's death from breast cancer, Bari gave a deposition for the civil rights lawsuit that she and Cherney filed against the FBI and Oakland Police for illegal search and false arrest after the case was dropped against them due to lack of evidence. The deposition and raw video footage from rallies and protests throughout a decade provide a backdrop for the entire film in which Bari is narrator.

Though this very well put together film details the plight of activists trying to stop the destruction of the remaining old growth forests in the Pacific Northwest, the story is about Bari, an effective organizer who successfully exposed the truth about a powerful, corrupt industry that was breaking the law and showing complete disregard for their workers and the environment. In Bari's case the offender was the timber industry, including companies like Georgia Pacific and Charles Hurwitz's Pacific Lumber, that were liquidating old growth forests at an unprecedented rate.

In reference to Hurwitz and the practices of Pacific Lumber, Bari said, "This isn't just scenery we're talking about, this man is ripping out the lungs of the planet and no human being has the right to do that."

Bari, a 40-year-old single mother of two at the time of the bombing, was devoted to the practice of non-violent civil disobedience, making the allegations that she bombed herself even more ridiculous. Earlier in her career, she effectively organized with unions on the East Coast and understood the importance of aligning with the timber workers in the fight to protect the remaining virgin forests.

"Judi understood that you can not have a public organizing effort that espouses violence and expect to succeed. She was a student of history and knew that non-violence had a proven track record of success," said Cherney in an interview.

The film unveils the extreme harassment Bari endured prior to the bombing, a testament to her ability to effectively organize, including death threats and log truck rear-ending her car. The refusal of local law enforcement to investigate Bari's allegations gave a green light to anyone wanting to attack Earth First!ers.

The misconduct of the investigation makes it seem like the bombing was an act of political sabotage aimed at Redwood Summer and that Bari was being framed.

In response to the pathetic work of local and federal law enforcement, Cherney said, "It wasn't that the FBI and Oakland Police bungled the investigation, it was that they never conducted any investigation at all. What we proved in court was that they knew we were innocent and just lied in order to silence us on behalf of Big Timber. Let's not forget there was a ballot initiative to ban clearcutting and reform forest practices, so billions of dollars were at stake. And the authorities were doing, as usual, the bidding of the corporations."

Twelve years after the bombing, justice was served when a federal jury awarded Cherney and the late Bari $4.4 million for violations of their rights of free speech and for illegal search and false arrest. Six of the seven law enforcement officials were found to have broken the law and violated civil rights for framing Cherney and Bari.

But the title of the film is never answered. There's speculation throughout the film about who might have been responsible for the bombing, but the need for further investigation is obvious. Had government investigators followed the chain of evidence 20 years ago, chances are this film would have never been made.

This film was particularly interesting for me, as I was one of those college students participating in Redwood Summer. Little did I understand at that time the significance behind the bombing and the levels of corruption in the timber industry.

I found great comfort in the music throughout the film as I'm a big fan of many of the artists, including, Robert Hoyt, Danny Dolinger, Dana Lyons, Casey Neil, Joanne Rand, Alice DiMicele, and of course Bari and Cherney as they often played at the rallies and protests. Bonnie Raitt's performance of Angel from Montgomery near the end of the film at a celebration of Bari's life was a pleasant surprise.

"Despite the serious content of the movie, we included humor, songs and numerous victories so that we hopefully empower and inspire future activism," Cherney commented.

Who Bombed Judi Bari? left me wishing that Judi were still alive. Her spirit, passion and skills sets as an organizer are desperately needed during this period of massive destruction of our natural resources. Her courage to live Earth First!'s motto of "no compromise in defense of mother earth" is unmatched.

I'll leave you with a quote from Bari that appears at the beginning of the film: "You cannot seriously address the destruction of wilderness without addressing the society that is destroying it."