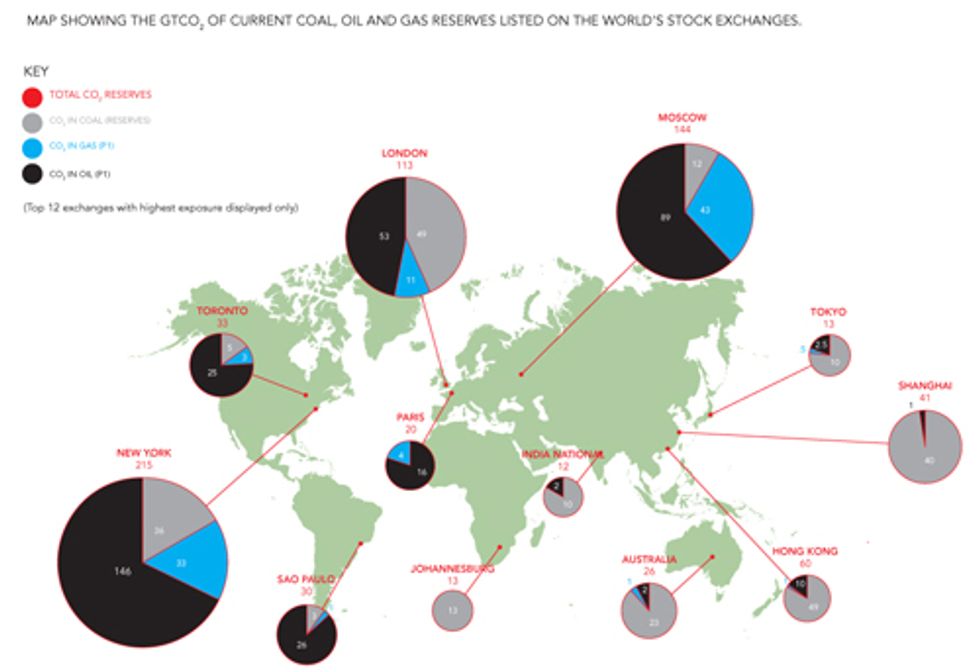 The world could be heading for another major economic shock as stock markets inflate an investment bubble in fossil fuels to the tune of trillions of dollars, according to new research.

To stick to current agreed global limits on emissions—and keep warming below 2˚C—the International Energy Agency warns that two thirds of the known global fossil fuel reserves must stay in the ground. This means 60-80 percent of the fossil fuels listed by companies are effectively ‘unburnable’ and therefore worthless, which could lead to massive market losses.

The authors of the latest report say that even if these rules were relaxed to allow emissions to a level which would see a 3˚C temperature rise, there would still have to be limits on fossil fuels. And while carbon capture and storage technology, which buries emissions underground, can play a role in the future, Carbon Tracker warns is unlikely to make any impact until the second half of the 21st century.

This highlights a fundamental contradiction–on the one hand vast amounts of fossil fuels must remain in the ground and on the other huge amounts of money is being poured into finding new reserves.

Commenting on the report, Lord Nicholas Stern, former chief economist of the World Bank said the business models of fossil fuel companies continue to be based on the extreme assumption that there will be no limits to greenhouse gas emissions. He warned that $6 trillion could be pumped into the ‘carbon bubble’ over the next decade.

Smart investors can already see that most fossil fuel reserves are essentially unburnable because of the need to reduce emissions in line with the global agreement by governments to avoid global warming of more than 2°C. They can see that investing in companies that rely solely or heavily on constantly replenishing reserves of fossil fuels is becoming a very risky decision.

But I hope this report will mean that regulators also take note, because much of the embedded risk from these potentially toxic carbon assets is not openly recognized through current reporting requirements.

The researchers are calling on the financial industry to improve the transparency and regulation around risky fossil fuel investments.

Along with banking giants HSBC they want to ensure that the potentially toxic assets underpinning global markets are plain for all to see as it could have major implications for global trading centers such as New York and London.

Fund managers speaking out in support of these recommendations have urged industry-wide action sooner rather than later in order to prevent shocks like the sub-prime mortgage crash that triggered the current global recession. The average pension fund portfolio already sinks 55 percent of its investments into risky carbon assets according to recent figures.

Company valuation and credit ratings methodologies do not typically inform investors about their exposure to these stranded assets, despite these reserves supporting share value of $4 trillion in 2012 and servicing $1.27 trillion in outstanding corporate debt over the same period. We need to challenge these methodologies:

Financial institutions use pension payments or shareholder money to make investments and maximize returns–but they also have a duty to act in their members’ best interests. However, individuals have the power to trigger a positive shift.

With the carbon bubble looming, investing in fossil fuel projects could hurt members’ savings, members can demand that financial institutions report and reduce their exposure to climate change risk.

ShareAction has launched a platform to coincide with the launch of the latest report, allowing people to research their pension funds and send letters of concern to the financial institutions using their money to fund dangerous fossil fuel projects.

This study also makes a number of recommendations for action by governments, financial intermediaries, institutional investors and citizens to manage this risk: