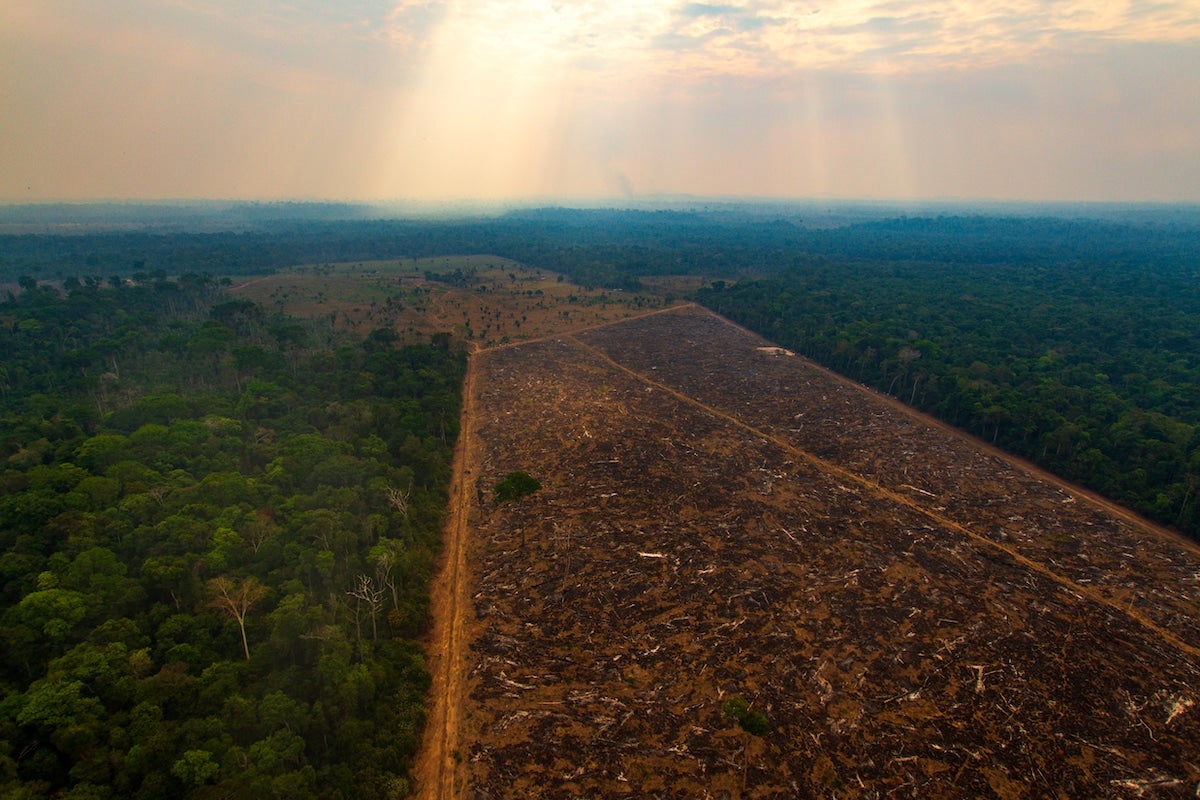 If only half of the land stewarded by Indigenous people and local communities in Peru were logged or destroyed, the country would need to eliminate all cars from its roads in order to meet its 2030 climate goals.

That’s one of the findings from a new report that shows just how important Indigenous territories are to preventing the worst impacts of the climate crisis, especially in four countries that store about 28 percent of the carbon currently sequestered in Indigenous lands.

“The key takeaway from our report is that governments in four countries we looked at – in Brazil, Colombia, Mexico, Peru – are not going to be able to beat their 2030 climate mitigation targets without better protecting and conserving Indigenous and community lands,” report co-author and Climate Focus policy expert Darragh Conway said in a press conference.

The report, titled “Sink or swim: How Indigenous and community lands could make or break nationally determined contributions” was authored by World Resources Institute and Climate Focus and published by the Forest Declaration Assessment, a civil-society initiative to track global progress towards the goal of halting and reversing deforestation by 2030. It was published on Thursday ahead of the expected Monday release of the Intergovernmental Panel on Climate Change Working Group III report on mitigation, and emphasizes how protecting Indigenous territories can help prevent the worst impacts of the climate crisis.

Both reports come at a crucial moment for climate action. Scientists have stated unequivocally that we must limit global warming to 1.5 degrees Celsius above pre-industrial levels in order to avoid the worst impacts of the climate crisis, yet the nationally determined contributions (NDCs) pledged by world leaders at the last COP26 climate conference in November of 2021 would heat the globe by a full 2.4 degrees Celsius, according to one analysis.

The report authors decided to zero in on the four critical forest countries in particular that together are home to more than 300 Indigenous groups. They looked at something called carbon fluxes – the amount of carbon absorbed by or emitted from a forested area – in the four countries between 2001 and 2020, comparing IPLC and non-IPLC lands. What they found was that 92 percent of the IPLC lands in the four countries were net carbon sinks, storing an average of 30 tonnes (approximately 33 U.S. tons) of carbon dioxide per hectare each year. This was more than twice the carbon stored in lands managed by other groups. Further, the IPLC lands stored an amount of carbon dioxide equal to, on average, 30 percent of the four countries’ 2030 emissions-reduction targets under the Paris agreement.

Without these carbon sinks, Brazil and Colombia would have to get rid of 80 percent of their vehicle fleets to meet their commitments and Mexico would need to jettison 35 percent. Peru, as already mentioned, would have to go entirely car-free if it lost just half of these vital lands.

Since these lands are already drawing down carbon without any extra effort on the part of policy makers, one would think the countries would be eager to claim them as part of their plan to fight climate change. Yet none of the four countries’ NDCs take note of the work that IPLCs are doing to sequester carbon. Neither do they make protecting IPLCs a cornerstone of their climate mitigation or forest protection strategies.

“And this is despite the absolutely fundamental role that these lands are already playing in putting the brakes on climate change and helping those countries to meet their existing climate change targets,” Conway told reporters. “What we’re seeing here is the indigenous and local communities really are acting as kind of silent saviors.”

The ‘Other Way Around’

It isn’t simply that the four countries don’t take these lands into consideration when drafting their climate strategies. They are all actively working against their protection.

“Existing governance frameworks in the four countries fall far short of what is needed to realize the mitigation potential offered by IPLC lands,” the study authors wrote. “In all four countries, these lands are under constant threat from ranching, mining, and logging, much of which is illegal and linked to corruption and collusion between governments and illegal actors.”

One notable example is Brazil, which has rolled back the clock on protections for Indigenous lands under the leadership of rightwing President Jair Bolsonaro.

“Unfortunately for us in Brazil, it shows how Brazil is going the other way around,” Adriana Ramos, a coordinator of the policy and law program at Brazilian NGO Instituto Socioambiental, told the press.

In the last three years, deforestation in Indigenous territories has increased 138 percent. Overall, Amazon deforestation in the country is three times higher than it should be to meet the country’s climate goals. The government has encouraged these changes both by changing policies and by encouraging illegal land invasions by gold miners, loggers and others. While the country vowed in its NDC to reduce illegal deforestation, this is based on draft bills in Congress that would reclassify several methods that are currently considered illegal as legal.

Ultimately, Ramos said that the country needed to reverse course on Indigenous rights in order to effectively fight the climate crisis.

“I think that for us in Brazil, the recognition of Indigenous territories should be one of the main strategies to deal with climate change and to avoid deforestation,” she said.

Brazil’s Indigenous communities and their allies are fighting back. Ramos said that protesters were gathering in Brasilia this week to put pressure on the government to protect land rights. The report authors, too, were not content to merely diagnose a problem. They also set out a series of recommendations the four governments could follow to give IPLC lands the respect they deserve:

Further, they argued that the countries should work with these communities when crafting their climate plans.

“When strengthening their NDC targets ahead of COP27, countries should work with IPLCs to define the contribution that IPLC lands can make to enhancing national ambition and to develop the national initiatives needed to realize that contribution,” report co-author Mario Finch, Research Manager of Climate Ambition and Implementation at World Resources Institute, said in a press release shared with EcoWatch.

While the study focused on just four countries in particular, Conway said that other forest countries with large Indigenous populations would likely benefit by reviewing its findings. For concerned governments and citizens in countries that do not have large Indigenous populations, they can make sure that any funding they provide to forest protection actually goes to Indigenous communities themselves and that any laws banning the import of goods gained via deforestation also emphasize the rights of Indigenous peoples.

“Ultimately these communities are best placed to protect the forest because they live there, they manage the forest, they’ve been doing it effectively for thousands of years,” he said.