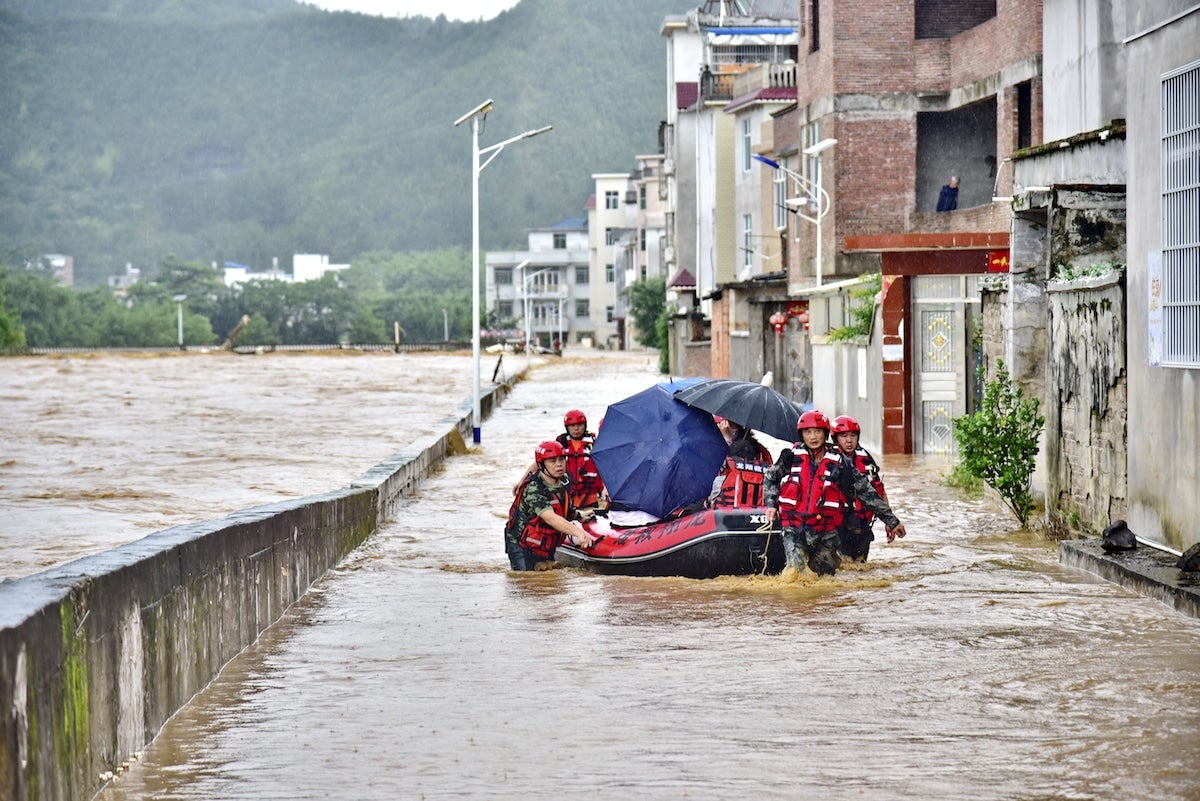 China is experiencing historic flooding that has displaced hundreds of thousands of people and swallowed homes and vehicles.

Two provinces in the south of the country increased flood warnings on Tuesday, as Reuters reported. While China sees flooding every summer during the rainy season, environmental advocates say that the rains have become heavier and more frequent because of the climate crisis.

“Daily precipitation extremes have increased over parts of the region,” the Intergovernmental Panel on Climate Change (IPCC) wrote of East Asia in its Sixth Assessment Report. “Heavy precipitation will increase in frequency and intensity (high confidence), leading to more frequent landslides in some mountain areas.”

On the same day, authorities in the province of Jiangxi issued a red alert, the Xinhua News Agency said, as Reuters reported. Xinhua said that 485,000 people were impacted by flooding in Jiangxi, 43,300 hectares of crops were damaged and losses totaled $70.21 million. In Guangdong, meanwhile, the emergency management department told Xinhua that flooding had impacted 479,600 people, devastated nearly 30 million hectares of farmland, destroyed more than 1,700 homes and caused $261 million in damages, The New York Times reported.

The destruction followed historic rainfall totals. In the provinces of Guangdong, Fujian and Guangxi, rainfall between early May and mid June reached its highest average since 1961, China’s National Meteorological Center said, as BBC News reported. Between May 1 and June 15, rainfall for the three provinces was an average of 24.4 inches, according to CNN. That’s more than 90 percent of China’s total rainfall average for 2021.

That rain has triggered both landslides and flooding. River levels reached 50-year highs, while the flow of the Beijiang River near Guangdong’s capital of Guangzhou was expected to reach a flow that is only likely seen “once every 100 years,” the local water conservancy bureau told Chinese media, as Reuters reported.

In addition to displacing people and destroying homes, the flood alerts have led to the closure of schools, businesses and public transportation, The New York Times reported.

China is experiencing a one-two punch of extreme weather, as the north is battling heat waves. Temperatures in nine northern and central provinces reached 104 degrees Fahrenheit on Tuesday. It got so hot in Henan province that the roads cracked.

Officials say that the flood conditions are likely to continue in the south, BBC News reported, as the rains move northward.