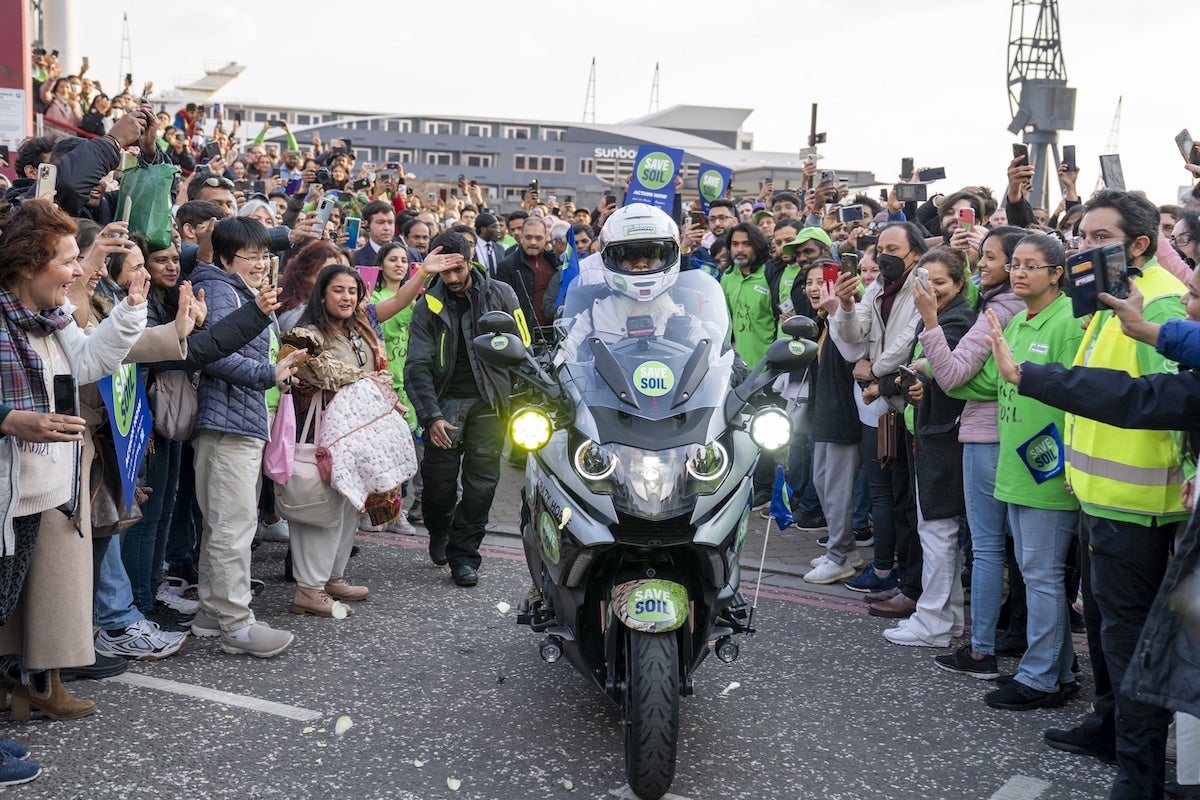 Sadhguru on his motorcycle in London. Conscious Planet

More than half of the world’s agricultural soils are already degraded, and both scientists and UN agencies agree that the remaining soil will only take us another 40 to 50 years.

Yet despite the threat this poses to biodiversity, the climate and global food security, soil health receives less attention than other looming environmental crises. That’s why yogi, mystic and visionary Sadhguru has set off on a 100-day, 30,000 kilometer (approximately 18,641 mile) motorcycle journey to save soil.

“Everybody knows the problem. Everybody generally knows what is the solution, but they’ve all been waiting for one idiot to come and bell the cat,” the 64-year-old said during a talk in Tbilisi, Georgia, on day 37 of his journey. “So here I am.”

Sadhguru revved up for his motorcycle odyssey from Trafalgar Square, London, on March 20, but his journey to save soil really began 24 years ago in Tamil Nadu, India, as Jyoti Jankowski, who has been volunteering with Sadhguru’s Isha Foundation since 2004 and the Conscious Planet/Save Soil movement since August 2021, told EcoWatch. In 1998, visiting UN officials warned that almost 60 percent of Tamil Nadu could become a desert by 2025, according to an Isha Foundation website.

“He was kind of shocked by this number,” Jankowski said. “And he went around and looked and he said, ‘No, it’s going to be sooner than that.’ So he started thinking about what it is that we can be doing for this and that’s, I think, where this whole thing started.”

The movement first focused on increasing vegetation to shelter the earth from the sun. It started off with local efforts to reforest Tamil Nadu’s Velliangiri Hills that rose behind the Isha Yoga Center. It then expanded to the state-wide Project GreenHands, which mobilized volunteers and farmers towards the goal of covering 33 percent of Tamil Nadu in vegetation. Finally, Sadhguru went national with 2017’s Rally for Rivers, which won the support of 162 million people in India. This attention on rivers evolved into the Cauvery Calling movement to aid the struggling southern Indian river by empowering 5.2 million farmers to plant 2.42 billion trees in its basin in a 12-years period.

Rivers and soil are connected, Jankowski explained, because the water that replenishes these rivers is filtered through the soil. Soil health is also connected to the health of the planet because soil stores three times the carbon dioxide of living plants and therefore helps combat the climate crisis, according to the Save Soil website.

The Conscious Planet movement to Save Soil takes Sadhguru’s longstanding concerns about the well-being of the literal earth beneath our feet global with three main aims:

Life on the Road

To further these aims, Sadhguru decided to travel from the UK to India by motorcycle, stopping in 26 countries. The route went through Europe and the Middle East, with a stop off in Abidjan, Côte d’Ivoire for the  15th session of the Conference of Parties (COP15) to the United Nations Convention to Combat Desertification. He is currently in India, and will conclude the trip at its southern tip in Coimbatore on June 21. Sadhguru ferried from London to The Hague and from Muscat, Oman, to Jamnagar, India, and also flew from Baku, Azerbaijan to Amman, Jordan, as well as to and from COP15 and the World Economic Forum in Switzerland. Otherwise, he was biking, sometimes for 12 to 14 hours at a stretch.

Justin Aubuchon, who has been volunteering at the Isha Foundation for the past decade and accompanied Sadhguru for part of the journey as a member of the audio-visual team, told EcoWatch about what life was like on the road.

The daily routine varied. Sometimes, the team would spend three or four days in a city for events and Sadhguru would only be biking to and from appearances. Other days meant rousing around 6 a.m., driving to a border crossing, waiting three to four hours to cross and then biking another three to four hours to the destination. Aubuchon said days like that were exhausting in a car, let alone a bike.

“I couldn’t even imagine what he was going through,” he said.

Sadhguru also persisted through a variety of road conditions, from steep, cobblestone streets in Rome to dusty, bumpy two-lane roads in Romania and Georgia. He drove through winds strong enough that truck drivers had to be put on notice, snow in Switzerland, and torrential rainfall coming into Rome that flooded the roadways. However, Sadhguru was not interested in arriving late.

“[I]t was just astonishing what he was putting himself through to get this message out,” Aubuchon said.

However, while Sadhguru was the only one riding a bike, he has not been alone in his efforts. At times there were as many as 40 to 45 people helping with the logistics of the journey, from organizing events to preparing food. A kitchen crew would even drive ahead with their trailer to be ready to serve a meal when the rest of the team arrived at a destination. Aubuchon said there was a sense of great purpose and camaraderie among all the volunteers.

“I saw it and I continue to see it as one of the most important things I’ve ever done in my life,” Aubuchon said.

Part of a Movement

This sense of purpose wasn’t limited to the volunteers organizing the journey, but extended to the audiences and individuals Sadhguru spoke with along the way. This was something that Aubuchon noticed when he recorded video footage of events.

“I was just blown away by, regardless of what city we were in, what country, what language they were speaking, it was almost universal, how receptive people were to this message and how open and excited they were about it,” he said.

He remembered in particular an encounter between Sadhguru and German actress and influencer Toni Garrn in Berlin.

“[S]he said something like she’s never been part of anything, any sort of movement before, but she feels part of this now,” he recalled.

Of course, the entire purpose of the Save Soil movement is to encourage this kind of participation, and the mission will extend beyond Sadhguru’s journey.

Jankowski said that people often ask him what they can do to improve soil health. His answer?

[J]ust our voices is what he needs. And if you can create a big enough voice, then this will get noticed and it will be impactful,” she said.

People inspired by the movement have taken the initiative to raise their voices in different ways. Volunteers in Canada have gotten Niagara Falls, the CN Tower and the Montreal Olympic Stadium lit up with the green-and-blue Save Soil colors. and one UK schoolboy wrote a letter about the issue to Prime Minister Boris Johnson and received a response.

This encouragement to spread the word in unique and creative ways has made the movement very hopeful in a time of great anxiety over what we as individuals can do about environmental degradation, Jankowski said. Aubuchon observed that many of the events he filmed had a “very celebratory atmosphere.” They would begin with musical performances from the host culture and conclude with the Save Soil anthem and dance.

That hopeful messaging was in evidence when Sadhguru met with school children planting trees outside of Baku, Azerbaijan. This is an area that is currently experiencing desertification, but was once very green, Aubuchon said.

“[H]e talked a number of times about [how] it would be easy for you to get it back, get it back into a green place,” Aubuchon said.

The next major Save Soil event is a walkathon being organized in more than 60 cities in the Americas on June 18 and 19.

The organizers chose Father’s Day weekend in particular, Jankowski told EcoWatch, “as a way of saying that as a generation, as parents, that this is something we should be giving to our children and their children.”