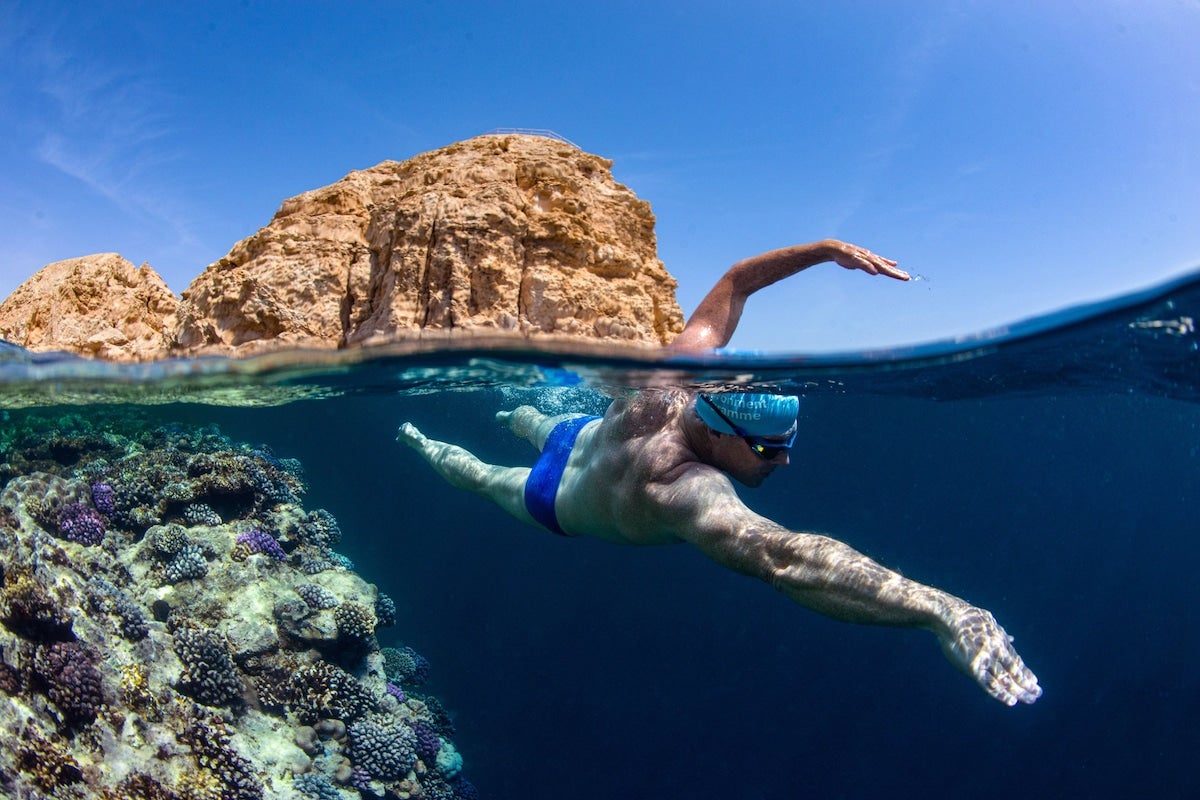 In an effort to call attention to the increasing vulnerability of coral reefs and the world’s oceans in the face of the climate crisis, British-South African endurance swimmer and UN Patron of the Oceans Lewis Pugh is attempting what is thought to be the world’s first swim across the Red Sea, the Lewis Pugh Foundation said in a press release. Pugh hopes to make the nearly 100-mile crossing in two weeks at about six miles per day.

Pugh began the historic swim a few days ago, according to The Hill.

Pugh’s journey will begin in Saudi Arabia and end in Hurghada, Egypt. Along the route, the swimmer will pass Sharm el-Sheikh, the location of next month’s UN climate conference COP27.

The most biologically diverse of the planet’s ecosystems, coral reefs are the foundation of 25 percent of all ocean life.

“If we lose our coral reefs, we will not just drive many thousands of species into extinction, we will lose an entire ecosystem, on which we depend. This would be unprecedented in human history. Coral reefs are the nurseries of our oceans, and home to some of the most incredible life on earth. I refuse to accept that we could lose them in my lifetime,” Pugh said in the press release.

At the climate conference, Pugh will emphasize the importance of ocean health in combating the climate crisis and call for the protection of 30 percent of the world’s oceans by 2030.

While swimming across the Red Sea, 52-year-old Pugh will not only be passing over some of the planet’s richest coral reef ecosystems, but crossing one of the busiest shipping lanes in the world leading to the Suez Canal.

“I’ve swum in coral reefs that are so incredibly beautiful and biodiverse. There’s fish of every single colour and description. But then I’ve come back a few years later and there’s very little left there,” Pugh told BBC News.

Pugh is the first person to have completed a long-distance swim in every ocean of the world.

Known for swimming in some of Earth’s most frigid waters, Pugh’s Red Sea crossing will see the swimmer tackling some of the warmest.

“I’ve been swimming in the world’s oceans for 35 years, and during that time I’ve seen them change dramatically,” Pugh said in the press release. “The biggest changes I’ve seen are in the Polar Regions, and in coral reefs. Both are affected by rising temperatures: the poles are melting, and the coral is dying. Ice and coral are the Ground Zeros of the Climate Crisis. These changes are happening before our very eyes; as evidence of global warming, they are indisputable.”

“Coral reefs are the barometers that illustrate clearly what happens when we heat our planet,” Pugh said in the press release. “Every fraction of a degree now matters.”

Red sea coral is remarkably resilient. While warming ocean temperatures, reef disturbance, pollution and overfishing are thought to have killed half the coral reefs in the world since the 1950s, the corals of the Red Sea have been found by researchers to be better able to withstand warming and acidification than other corals, like those of the Great Barrier Reef that are subjected to increasingly frequent bleaching events.

The Lewis Pugh Foundation and the Hurghada Environmental Protection and Conservation Association (HEPCA) — a group of professional divers, scientists, community members and industry experts who share the common goal of protecting the Red Sea’s invaluable resources — have partnered for Pugh’s Red Sea swim.

HEPCA is advocating for the Egyptian Red Sea’s Great Fringing Reef to be designated as a multiple-use protected area. HEPCA would like to see a reduction in the pressure put on the coral reefs surrounding Hurghada, as some sites have seen 200,000 annual dives, though it is recommended that no more than 5,000 to 22,000 dives be made in a single location.

“This is a fight to get people to understand the huge impact [climate change] is having not just on current generations, but every single future generation on this planet,” Pugh said, as BBC News reported.

Dreaming of Beachfront Real Estate? Much of Florida’s Coast Is at Risk of Storm Erosion
By Zhong-Ren Peng
By The Conversation
Will Paris Ban Electric Scooters?
Could the City of Light ban the electric scooters that
By Olivia Rosane
Arctic Carbon Transportation Route Discovered by Scientists
In the Arctic, a previously unknown carbon transportation route has
By Cristen Hemingway Jaynes