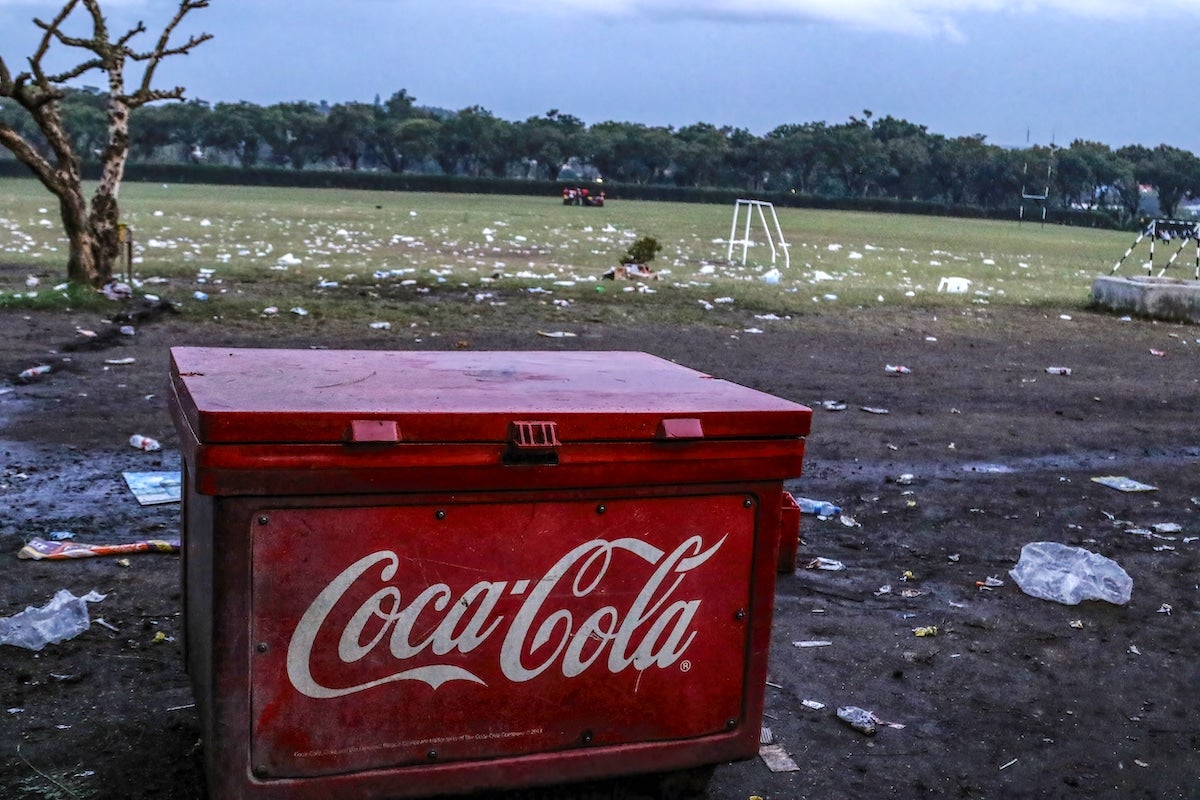 A Coca-Cola branded cooler box on a field littered with plastic bottles after a school's sports event in Nakuru, Kenya on Sept. 13, 2022. James Wakibia / SOPA Images / LightRocket via Getty Images

In a deal that has been called “baffling” by Greenpeace USA Oceans Campaign Director John Hocevar, the Egyptian government has signed an agreement with Coca-Cola to sponsor the United Nations Conference on Climate Change (COP27), which will be held in Sharm El-Sheikh from November 6 to 18, a press release from Greenpeace said.

The deal between the climate conference and the Coca-Cola company, which global coalition movement Break Free From Plastic has deemed “the world’s top polluter,” was labeled “greenwash” by environmental activists, reported the Guardian.

Environmental activists told the BBC that, because most plastics are made from fossil fuels, the deal undermines the climate talks.

“Coca-Cola sponsoring the Cop27 is pure ‘greenwash.’ Coca-Cola is one of the world’s biggest users of plastic,” said Emma Priestland, a coordinator for Break Free From Plastic, as The Guardian reported. “Over four years, we’ve found Cola-Cola to be the world’s top plastic polluter in our annual brand audits. It’s astounding that a company so tied to the fossil fuel industry is allowed to sponsor such a vital climate meeting.”

The UN climate change conference is the world’s top forum for governments, environmental organizations and businesses to come together with the purpose of confronting the climate crisis.

The sponsorship by Coca-Cola was widely criticized on social media as yet another instance of corporate greenwashing, including by Canadian author and social activist Naomi Klein, who tweeted: “Super fun to have a climate summit in a police state sponsored by @CocaCola while most ‘civil society’ delegates save their indignation for jacked up hotel prices instead of locked up political prisoners.”

A delegate at last year’s climate conference in Glasgow has started a petition demanding the United Nations Framework Convention on Climate Change stop accepting corporate sponsorship, beginning with the removal of Coca-Cola as a COP27 sponsor.

“Coca-Cola produces 120 billion throwaway plastic bottles a year – and 99% of plastics are made from fossil fuels, worsening both the plastic and climate crisis. They have yet to even acknowledge that this is a problem or explain how they will meet their climate goals without ending their plastic addiction. This partnership undermines the very objective of the event it seeks to sponsor,” said Hocevar in the press release.

COP26 sponsorship was said to have made about $281 million, with Unilever as the main sponsorship partner, reported The Guardian. Other companies sponsoring last year’s climate talks in Glasgow included ScottishPower, National Grid, Microsoft, Hitachi, Sky and Sainsbury’s.

“Cutting plastic production and ending single-use plastic is in line with the goal of keeping global warming below 1.5 degrees. If Coca-Cola really wants to solve the plastic and climate crisis, it needs to turn off its plastics tap,” Hocevar said in the press release. “Ending Coca-Cola’s addiction to single-use plastic is an important part of moving away from fossil fuels, protecting communities, and combating climate change.”