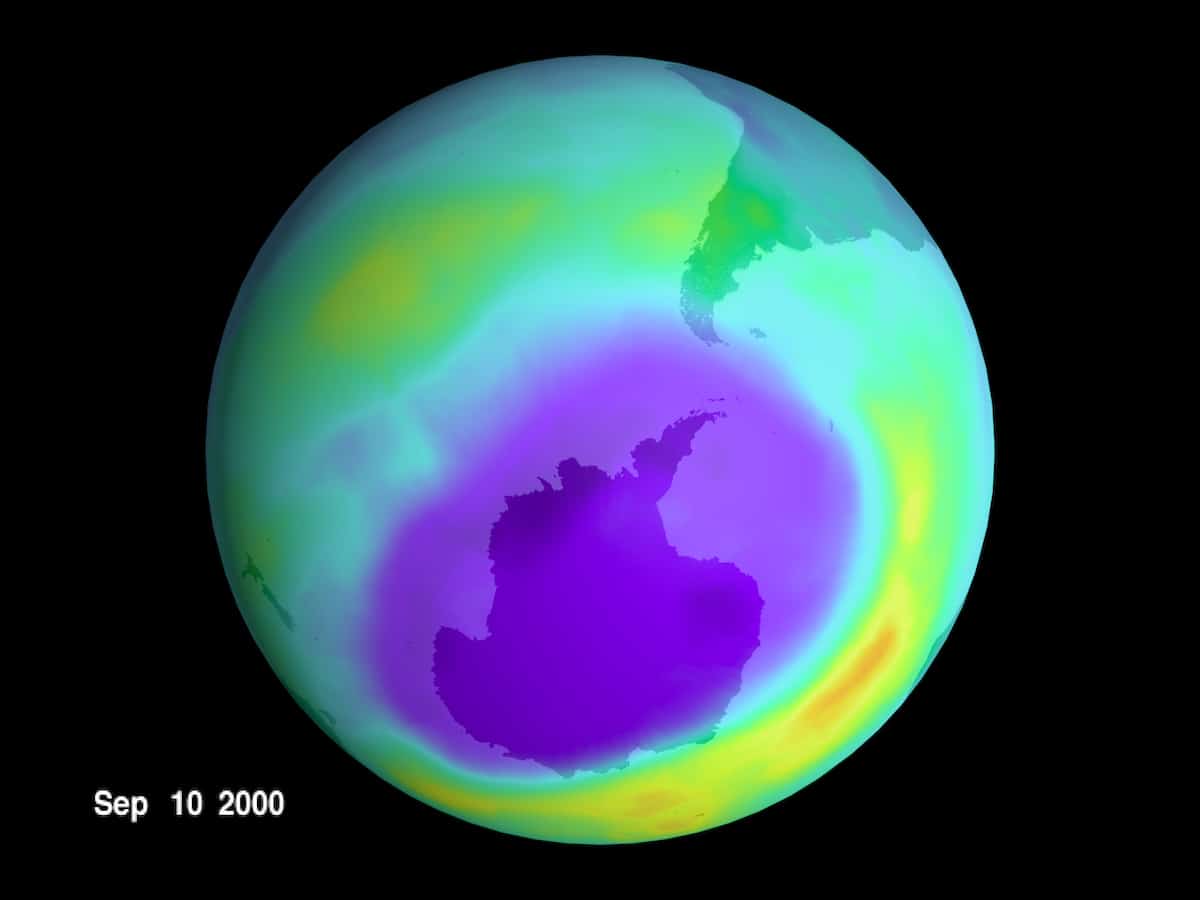 The ozone hole over Antarctica in 2000. Newsmakers / Hulton Archive

When world leaders come together to solve environmental problems, it actually can make a difference.

A new report from a United Nations-backed panel of experts found that the hole in the ozone layer is on track to close completely within four decades, as long as current policies to phase out ozone depleting substances remain in place.

“Ozone action sets a precedent for climate action. Our success in phasing out ozone-eating chemicals shows us what can and must be done – as a matter of urgency – to transition away from fossil fuels, reduce greenhouse gases and so limit temperature increase,” World Meteorological Organization Secretary-General Professor Petteri Taalas said in a UN Environment Programme (UNEP) press release emailed to EcoWatch.

The ozone layer is important because it protects plants and animals from harmful ultraviolet (UV) rays, as The Washington Post explained. UV-B rays in particular can cause cancer and eye damage in humans and make it harder for plants to grow and store carbon dioxide.

In the 1980s, however, scientists observed that the ozone layer was thinning because of the release of ozone depleting chemicals like chlorofluorocarbons (CFCs), which were commonly used as solvents and refrigerants, The Guardian noted. To address this, world leaders agreed to the Montreal Protocol on Substances that Deplete the Ozone Layer in 1987, according to the UNEP. It helped lead to the phase out of 99 percent of these substances, and has achieved the backing of every country on Earth. National Oceanic and Atmospheric Administration scientist David Fahey told The Guardian it should be considered “the most successful environmental treaty in history.”

Fahey was a lead author of the new report that bolsters this view. The Scientific Assessment Panel to the Montreal Protocol on Ozone Depleting Substances quadrennial assessement report was presented at the 103rd meeting of the American Meteorological Society on Monday.

It concluded that the ozone layer should recover to 1980 levels by around 2040 for most of the globe, around 2045 for the Arctic and around 2066 for Antarctica.

There is good news for the climate crisis, too. To replace CFCs, many industries began to use another substance called hydrofluorocarbons (HFCs), according to UNEP. However, it turns out that these chemicals are potent greenhouse gases. To address this, world leaders agreed to the Kigali Amendment to the Montreal Protocol to phase out 80 to 85 percent of HFCs by the late 2040s. Because of this agreement, the world is set to avoid an extra 0.3 to 0.5 degrees Celsius of warming by 2100, the latest report found.

“The impact the Montreal Protocol has had on climate change mitigation cannot be overstressed,” Executive Secretary of the United Nations Environment Programme’s Ozone Secretariat Meg Seki said in the UNEP press release. “Over the last 35 years, the Protocol has become a true champion for the environment. The assessments and reviews undertaken by the Scientific Assessment Panel remain a vital component of the work of the Protocol that helps inform policy and decision makers.”

There are still some things that could interfere with the ozone layer’s recovery. One is if world leaders decide to address the climate crisis by sending particles that reflect sunlight into the top part of the atmosphere, according to The Washington Post.

“The Antarctic ozone hole is the poster child of ozone depletion,” Paul Newman, one of four co-chairs of the Scientific Assessment Panel of the Montreal Protocol, told The Washington Post. “Stratospheric aerosol injections will probably make it a little bit worse.”

And while the success of the Montreal Protocol and Kigali Amendment does offer some hope for the ability of international cooperation to resolve environmental crises, Fahey noted that the hole in the ozone layer was a different scale of problem from climate change, both because carbon dioxide stays in the atmosphere for longer and because it is used so much more widely in society.

“CO2 is another order of magnitude when it comes to its longevity, which is sobering,” he told The Guardian. “Getting every person on the planet to stop burning fossil fuels is a vastly different challenge.”