New App Tracks Your Carbon Footprint, Compares it to Your Facebook Friends' Output 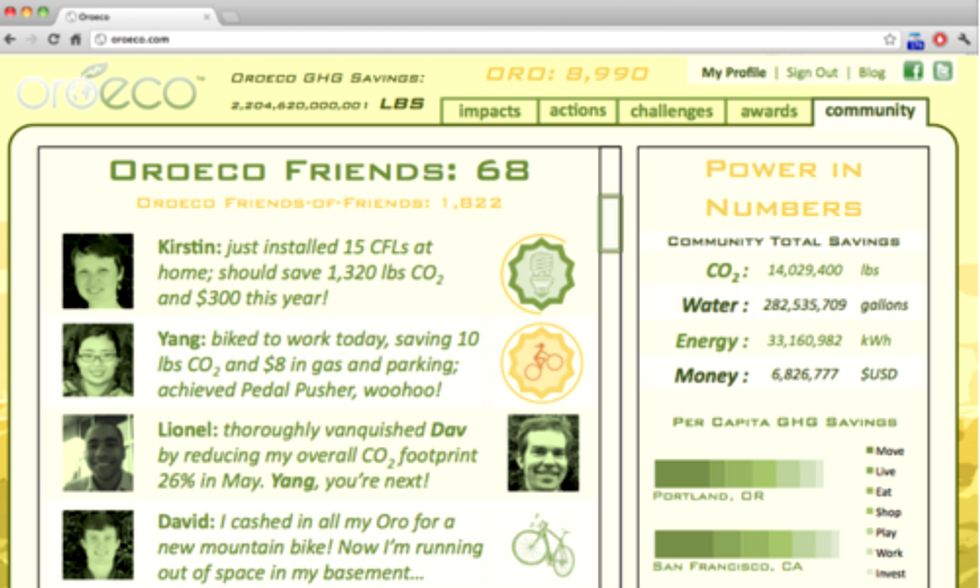 San Francisco-based Oroeco may have discovered the best way to get people to curb climate change.

The company's web app of the same name tracks individual carbon footprints and links to Facebook. That means your large carbon output will be subjected to shame from your friends and followers, and rightfully so.

The app places a carbon value on most of the decisions you make, including retail purchases, food options, energy consumption and, of course, travel. The app uses data from its partnership with the University of California at Berkley's CoolClimate Network to help each user identify which choices are impacting their carbon value the most.

"Something that comes as a shock to a lot of our users: The average person who says they care about climate change actually has a substantially worse than average footprint," Oroeco CEO Ian Monroe told Grist.

The executive attributed that assertion to the financial security of those users and a carbon-heavy activity that it provides—traveling.

"You have a lot of people who are using reusable bags and water bottles, driving a Prius, maybe eating a bit more of a veggie friendly diet," Monroe said. "But then they’re flying to Bali or South Africa or something once a year. They end up having a larger carbon footprint than a conservative guy who drives an SUV in the suburbs of Atlanta but doesn’t fly anywhere."

But the app does more than provide a way for your Facebook friends to judge you. It also gives you 50 personalized tips on how to cut that carbon footprint down and save money in the process.

Oroeco also partnered with Impact Carbon to provide clean cookstoves that save forests and lives in Africa as a way to offset users' remaining carbon footprints.