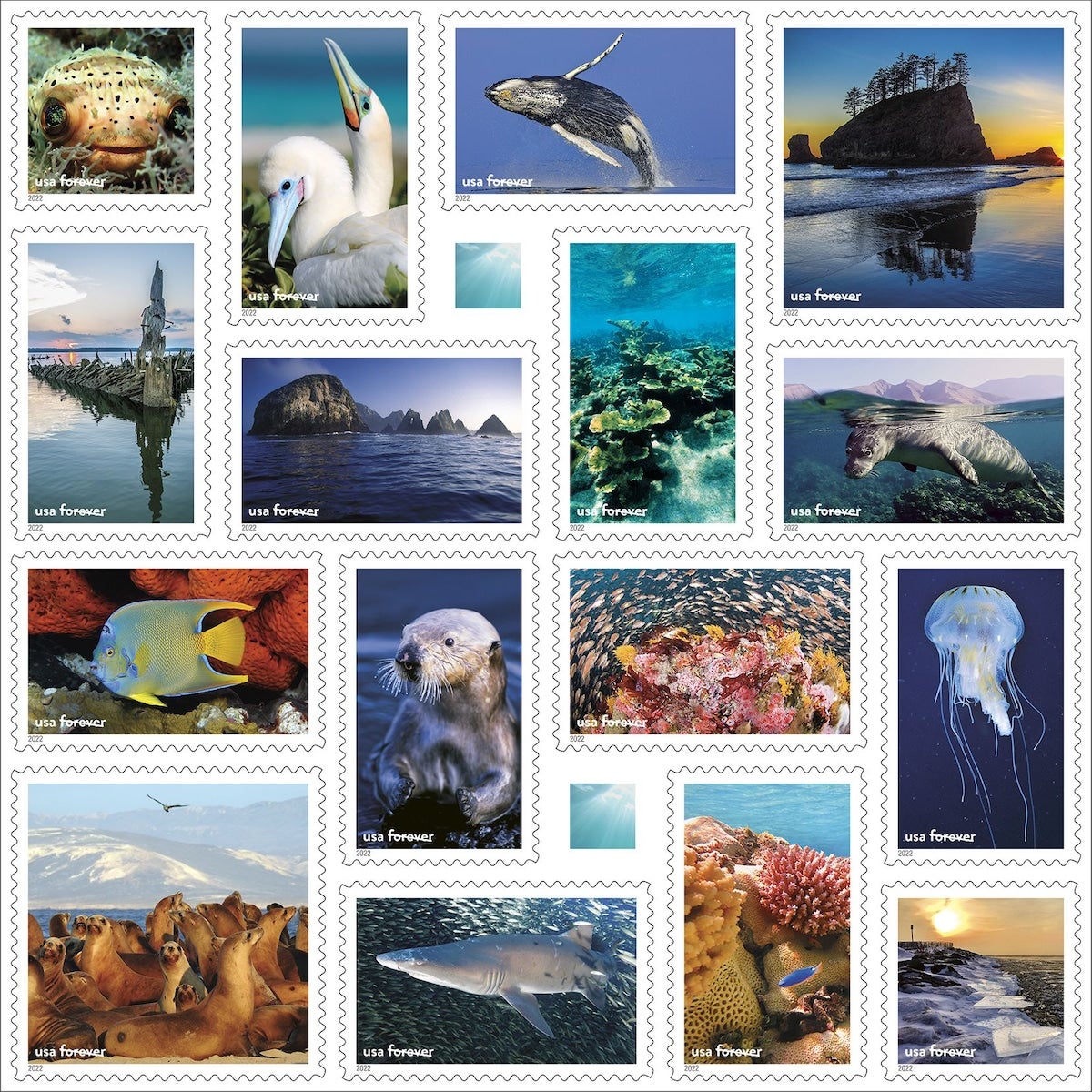 The National Marine Sanctuary System was established on Oct. 23, 1972 with the signing of the Marine Protection, Research, and Sanctuaries Act. That means the network – which includes 15 national marine sanctuaries and 2 marine national monuments –  turns 50 this year. Now, they’ve got a 16-stamp set to celebrate!

On Aug. 5, the U.S. Postal Service (USPS) will release a new series of Forever stamps that celebrates the rich diversity and beauty within our sanctuaries and the marine ecosystems they protect. The collection commemorates the 50th anniversary of the sanctuary system.

Marine sanctuaries protect the ecological, cultural and historical inheritance of the American people and balance those against their rights to recreate and enjoy these resources. They preserve critical habitat for threatened and endangered wildlife and safeguard the ancients ites and living traditions of Indigenous peoples who have inhabited these regions for millenia. Sanctuaries are also critical in the fight against climate change, to protect biodiversity and to meet the goals of protecting 30% of land and sea by 2030.

According to USPS senior public relations representative Kim Frum, the Citizens’ Stamp Advisory Committee evaluates and selects stamp subject matter each year from up to 30,000 possible subjects. They chose the sanctuaries, and the postmaster general made the final decision.

Images include iconic and diverse species such as elkhorn coral, humpback whales, jellyfish and sea otters. These represent the more than 620,000 square miles of marine and Great Lakes waters that make up the sanctuary system – an area nearly the size of Alaska that stretches from the North Atlantic to the South Pacific, and from the Florida Keys to the Pacific Northwest. An illustrated map of the entire sanctuary system is printed on the back panel.

“The U.S. Postal Service celebrates the nation’s underwater treasures with the release of the National Marine Sanctuaries stamps,” Frum said.

Avid diver and underwater photographer Daryl Duda captured the image of a friendly-looking balloonfish in the Florida Keys. He said, “They are probably my favorite fish to photograph as they always seem to have a smile on their face. I am honored to have one of my photos in this National Marine Sanctuary [collection].”

Greg McFall photographed a solitary sand tiger shark at Monitor National Marine Sanctuary. The late photographer’s family is touched that he lives on through his underwater photography, now immortalized in this national stamp.

“I am thrilled that our nation is celebrating the underwater treasures protected by national marine sanctuaries through this collection of stunning images,” said Florida Keys National Marine Sanctuary superintendent Sarah Fangman.

“The National Marine Sanctuaries give us hope to help save our oceans and natural American bodies of water,” Duda emphasized.

The National Marine Sanctuaries Forever® stamp series to be released on Aug. 5. will cost $.60 each, and come in a sheet of 16 for $9.60. Forever stamps will always be equal in value to the current First-Class Mail 1-ounce price. Orders can be made online at usps.com/stamps or by calling 844-737-7826. Frum estimates that roughly a year’s worth of the series will be printed.

Kris Sarri, president and CEO of the National Marine Sanctuary Foundation, which supports the efforts of the Office of National Marine Sanctuaries, added, “For half a century, our sanctuaries have protected these treasures for all of us to enjoy, explore, and discover. As we mark the 50th anniversary of the Sanctuary System, we must recommit to saving these spectacular places and protecting their splendor for generations to come.”

Tiffany Duong
Tiffany is a writer, explorer and inspirational speaker. She holds degrees from UCLA and the University of Pennsylvania Carey Law School. She spent years as a renewable energy lawyer in L.A. before a scuba diving trip to the Galapagos inspired her to quit everything and revamp her life. She writes about the oceans, climate, and the environment from her slice of paradise.