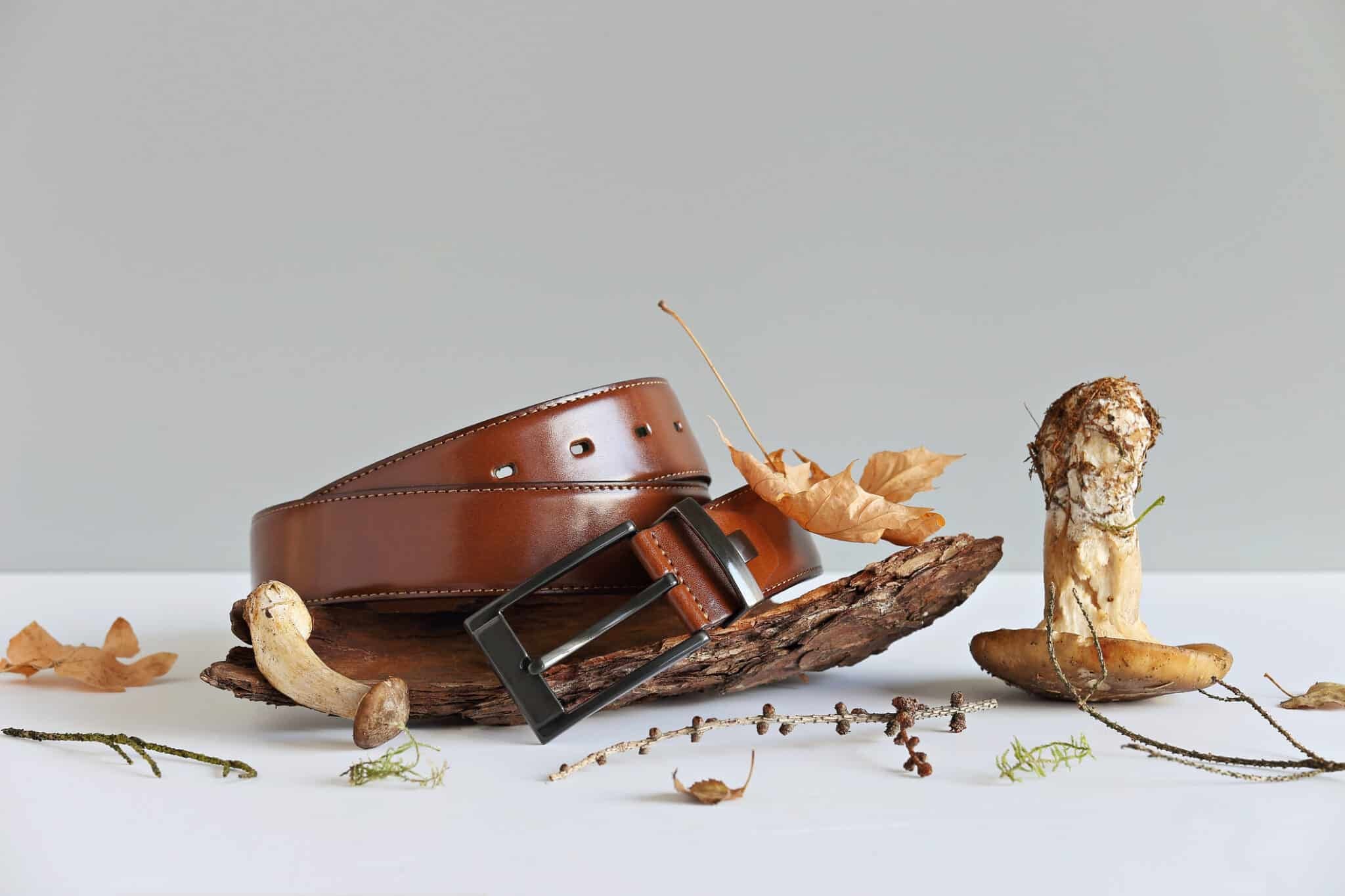 Leather is everywhere – in our shoes, our purses and luggage, our winter jackets and stylish furniture – but its effect is seen globally.

To create the leather for our clothing, homewares, and other purposes, billions of cows are slaughtered each year. The livestock sector – which produces both food products and leather – is the biggest use of agricultural land worldwide. Grazing land and farmed feed crops for cattle result in deforestation, eliminating vital carbon sinks, destroying ecosystems, and harming nearby communities. Cows also produce methane: a potent greenhouse gas linked to climate change.

The skin harvested from cattle and other animals goes through a three-step process: preparation, tanning, and crusting (and sometimes finishing as well). Tanning makes the leather flexible and removes hair, fat, and meat, and during crusting, the material gets thinned, dried, softened, and colored through the use of chemicals and machinery. The waste from these processes is full of carcinogenic chemicals – like chromium, a heavy metal used in tanning – and often gets dumped into waterways in countries without strong environmental protection laws, like India, China, and Bangladesh.

Both animal and human abuses are prevalent in the industry; tanneries are known for their dangerous conditions and machinery, as well as exposure to cancer-causing chemicals, according to Gizmodo. While traditional vegan leather removes animal cruelty from the equation, it’s usually made with polyurethane, PVC, and other plastic and synthetic materials that contain hormone-disrupting phthalates, and eventually create microplastics that end up in oceans, natural environments, and even our own bodies.

Yet, the industry is changing, and innovations in leather are abound – and, some of the materials being used might surprise you.

Beneath a cactus’s prickly exterior, Adrián López Velarde and Marte Cázarez have found a new alternative to animal-based leather. The two developed Desserto: a type of leather made from the Nopal cactus, more colloquially known as the Prickly Pear. Top retailers of leather goods like Karl Lagerfeld, Fossil, and Everlane have begun selling products made with the cactus-based leather. Mercedes-Benz has even incorporated Deserttex – the company’s faux-leather product for automobiles – into an electric concept car.

If you’ve ever welcomed a cactus into your houseplant family, you know that they’re extremely tolerant of drought. They grow quickly and require very little water: so little that Desserto cacti are only watered with rainfall, so no irrigation tactics are used in their fields. According to the company, the product saves 164,650% of water compared to animal leather, and 190% compared to the polyurethane-based vegan leather.

Cacti even sequester carbon (that is, remove it from the atmosphere). On the company’s 14 acres, the Prickly Pears absorb 8,100 tons of CO2 every year, which is much less than the emissions the products create. Desserto also employs organic growing methods on their land, and uses the byproducts of production for animal feed.

Does pineapple belong on pizza? And, more importantly, does it belong in leather? Carmen Hijosa thinks so.

Hijosa, who worked in the leather goods industry for many years, wondered if the strong fibers in pineapple leaves could be used for something. Inspired by Barong Tagalog – a traditional garment in the Philippines made from these fibers – she went on to found Ananas Anam and develop the pineapple-leaf-based product Piñatex, which is now used by Hugo Boss, H&M, Paul Smith, and Nike. The company works with Filipino pineapple farmers, collecting leaves that otherwise would have been left to rot, and thereby turning this agricultural byproduct into a valuable new product. About 480 leaves are used to create one square meter of Piñatex, which weighs and costs less than traditional leather. The cellulose fibers are dried in the sun, purified, and then made into a mesh that’s finished with a plant-based resin. The whole process creates hardly any waste, Hijosa told CNBC in an interview, while 30% of leather skins are typically wasted in the traditional leather-making process.

Dutch designer Tjeerd Veenhoven pioneered Palmleather over a decade ago, ahead of the alternative-leather curve. He wanted to find a use for the leaves of the 80 million Areca Betel Nut Palm trees growing in southern India, which are rarely used. He found that the brittle leaves become more flexible when dipped in a biological softening solution made with glycerin, water, and some other ingredients. Now, local factories in India, the Dominican Republic, and Sri Lanka manufacture Palmleather, which can be used for making bags, book jackets, shoes, and the iconic, unique Palmleather Filigree Rugs.

Mushrooms are magic, and many industries have been harnessing their power to break down plastic, fertilize fields, and erect buildings. Why not revolutionize the fashion industry while we’re at it?

With its versatility and low environmental impact, companies are jumping at the opportunity to grow products with mycelium: the thread-like root structure of fungi. Biotechnology company Bolt Threads released their faux-leather product, Mylo, and in 2021, Mycoworks debuted their mycelium-based leather in the world of high fashion as a Hermès Victoria bag. Unlike some other mushroom leather, they grow the products themselves, engineering the mycelium cells to fill out 3-D structures to the exact specifications of a product, generating almost no waste or scraps in the process. The mycelium is fed a mixture of sawdust and organic materials as it grows, creating a dense, strong material as it expands.

Copenhagen-based Beyond Leather has found a use for the 25% each apple that is wasted after it’s pressed for cider or juice. Beyond Leather is taking that waste – 500 to 600 tons of it – from a small Danish juicer that processes apples from local farmers and turning it into Leap: their new leather alternative.

The polymers and short fibers in the apple are crucial to building their products, although it’s only one of the materials they use. Leap is a three-layered product of apple waste, natural rubber, and a backing of cotton and wood fiber, finished with a protective coating. The product can be disassembled at the end of its life and disposed of properly. Although the company hopes to use only apple waste for their products in the future, they currently use organic cotton, the wood-pulp-based fiber Tencel, and a polyurethane/bioplastic mix. But, while not entirely made of plants, the production of Leap requires only 1% of the water needed for traditional leather, and emits 85% less carbon dioxide, according to the company.