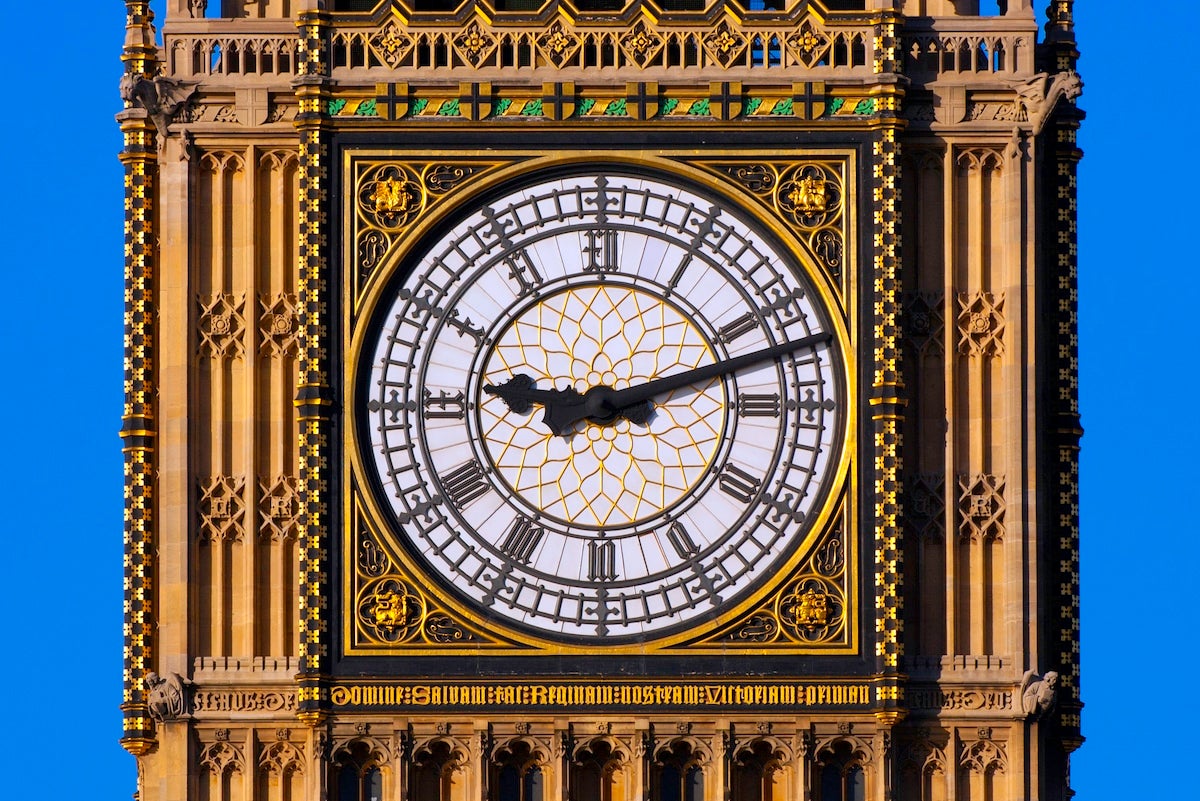 A clean energy expert thinks the UK should no longer change its clocks in the winter. Scott E Barbour / The Image Bank / Getty Images

The UK is in the midst of an energy crisis that prompted now-former Prime Minister Liz Truss to lift a ban on fracking and expand oil and gas licensing in the North Sea.

But a clean energy expert has come forward with a way Britain can reduce energy costs without burning more fossil fuels: getting rid of daylight savings time.

“By simply foregoing the winter Daylight Savings Time (DST) in October, we save energy because it is brighter in the evening during winter, so we reduce commercial and residential electrical demand as people leave work earlier, and go home earlier, meaning less lighting and heating is needed,” professor Aoife Foley from the School of Mechanical and Aerospace Engineering at Queen’s University, Belfast, said in a statement.

Foley calculated that households could save £1.20 a day and more than £400 a year if Daylight Savings Time were abolished. Currently, energy demand is at its highest in the winter in the evening between 5 p.m. and 7 p.m., putting strain on the National Grid. Her calculations did not include gas savings or factor in commercial or industrial energy use, but she said that getting rid of daylight savings would benefit those sectors, too.

“[T]ere would be even more significant energy, cost and emissions reductions for hard strapped businesses and the public,” she said.

Daylight Savings Time was originally implemented to save energy during wartime, in this case during World War I. It was introduced in 1916 to extend early morning daylight hours. Today, most countries in the European Economic Area change the clocks the last Sundays of October and March.

Foley’s proposal comes in the context of another war, this time Russia’s invasion of Ukraine that has reduced energy flow to Europe. In Ireland, EirGrid has said it was possible there could even be blackouts this winter, Independent.ie reported.

“We are no longer in an energy crisis in Europe but an energy war and dependent on weather conditions this winter it is very likely we may need to start rationing energy very seriously to avoid bigger energy issues in December and January when gas reserves start to run low,” Foley added. “There is no doubt that by foregoing the daylight savings in winter we would save a lot of energy, reduce our bills and carbon emissions during this energy war, and especially during a cost of living crisis.”

The continued relevance of turning clocks forwards in spring and backwards in fall has been debated in many countries. In the U.S., the Senate passed legislation ending the practice in March, but similar legislation has yet to be approved by the House, according to the National Conference of State Legislatures. In the European Union, most citizens support an end to the time change, The Guardian reported. The European Parliament even passed legislation to that effect in 2019, but it has not yet been put in practice.

Because of Brexit, the EU’s actions would no longer apply to the UK, which is where Foley’s proposal comes in. However, one difficulty is Ireland, which could end up with two different time zones if either the Republic of Ireland or the UK, to which Northern Ireland belongs, decides to change and the other does not.

“It would be great if the UK Government consulted with the Irish Government on an emergency proposal to abolish daylight savings this year,” Foley suggested. “Obviously in Ireland two different time zones would be impossible but Ireland would also make energy and emissions savings and enhance security of supply.”