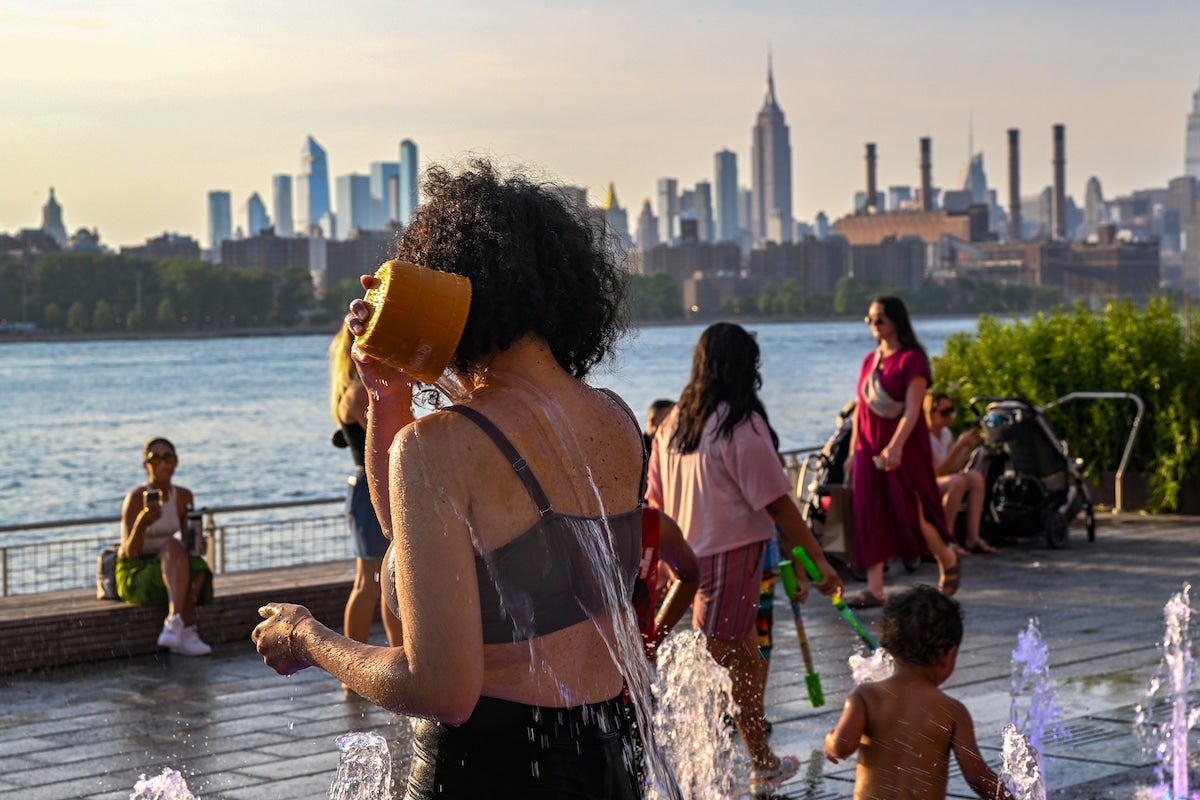 A woman pours water on her face to cool off during a heatwave in Brooklyn, New York on July 24, 2022. Alexi Rosenfeld / Getty Images

The climate crisis is altering the U.S. temperature map, as cities all over the country break heat records. The temperature increases have become so severe that a new analysis by research organization Climate Central — which is made up of climate scientists and science communicators — has found that 16 cities in the U.S. are at risk of experiencing summer temperatures similar to those in parts of the Middle East by 2100, reported The Guardian.

During this summer’s heat waves, almost one-third of the U.S. population has been under heat warnings. Record high temperatures have been broken from Portland, Oregon, to Boston, with the barometer reaching 100 degrees Fahrenheit or higher in both locations.

According to Climate Central’s “Shifting U.S. Cities” analysis, 247 cities in the U.S. could be experiencing warming that makes their summers feel similar to locations across the country or the planet by the end of the century, with an average summer temperature increase of eight degrees Fahrenheit.

For a great number of cities, temperatures by the summer of 2100 will be similar to those an average of 437 miles to the south.

Future summers in Los Angeles won’t even mimic those of an American city, but will be similar to Túxpam de Rodríguez Cano, Mexico, after seeing 5.8 degrees Fahrenheit of warming.

“The real risks will be in heatwaves that are now occasional extremes that will start lasting longer,” said spokesperson for Climate Central Peter Girard, as The Guardian reported. “These sort of heatwaves will become normal and the dangers will be far more present. There will be people who have never needed air conditioning who will face this. It can quickly go from uncomfortable to dangerous.”

For the study, the researchers looked at temperature statistics to establish a present-day “normal” temperature. They compared the existing climate circumstances to a world where the average global temperature increases by around 3.6 degrees Celsius by 2100 due to a lack of emissions reductions.

The planet has already seen a temperature increase of 1.2 degrees Celsius since preindustrial times, which has led to more intense wildfires and heat waves.

Even if the global temperature increase is kept below 3.6 degrees Celsius, as many analysts now believe it will be, Girard said climatic changes will occur in U.S. cities.