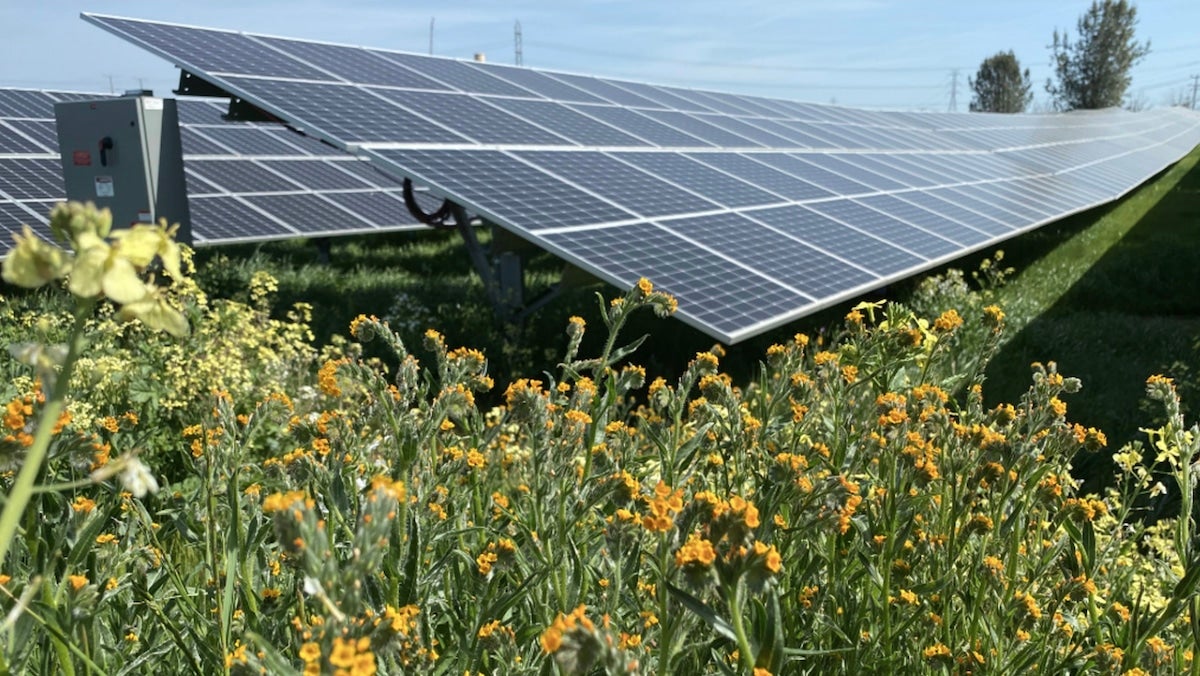 An innovative solar project at a decommissioned nuclear power plant in California has found a way to tackle both the climate and biodiversity crises.

Non-profit the Electric Power Research Institute (EPRI) and the Sacramento Municipal Utility District (SMUD) announced Thursday that they would restore native prairie and habitat for pollinators beneath and around 160 megawatts (MW) of solar panels.

“The Rancho Seco project is a unique collaboration at the intersection of communities, biodiversity, and climate-friendly energy,” EPRI senior technical executive and conservation biologist Jessica Fox said in a press release. “Successful demonstration could provide the blueprint for future renewable energy projects throughout the country that are restorative not just in their kilowatts, but also for local people and biodiversity.”

The new project is an example of agrivoltaics, the emerging practice of combining land-based farming and solar farms. It can involve everything from using solar arrays to allow agricultural land to rest and soil to restore itself to growing edible crops beneath solar panels, as CleanTechnica explained. The California project is an example of one of the earliest types of agrivoltaic applications: using the space beneath solar panels to restore habitat for pollinators.

This is a vitally important goal: pollinators including bees and butterflies are needed to grow around 35 percent of the world’s food crops, as PV Magazine pointed out. Yet human activity has pushed insect populations to the brink of collapse, with scientists warning about an insect apocalypse because of declining numbers.

The California project is an example of restoration in more ways than one. It is located on the site of the former Rancho Seco nuclear power plant. This plant was decommissioned in 1989 after more than one concerning incident, according to CleanTechnica. Now, the 2,000-acre site is a place for nature and different types of energy.

First, it houses the Cosumnes Power Plant, which is a gas-powered plant, according to PV Magazine. However, the plant site also includes a nature preserve that offers habitat to the federally protected California Tiger Salamander. Then, in February 2021, the Rancho Seco Solar II project was added. This 160-MW solar array is operated by D.E. Shaw Renewable Investments through an agreement with SMUD.

Finally, the agrivoltaics project will restore prairie under both the solar panels and other areas of a 20-acre chunk of the Rancho Seco site, according to the press release. The project is a collaboration between EPRI; SMUD; the University of California, Davis; the Xerces Society for Invertebrate Conservation; D.E. Shaw Renewable Investments; and NovaSource Power. The project will be implemented in stages over four years and include measuring changes in energy, management costs and carbon stored in the soil. It will also go towards SMUD’s 2030 Zero Carbon Plan.

“We are excited for this project to consider multiple levels of energy including solar power, the energy needs of the biological ecosystem, and the restoration of cultural energy for our communities,” Kathleen Ave, SMUD’s senior climate and ecosystem strategist and co-chair of its Power-In-Pollinators initiative, said in the press release.

The Power-In-Pollinators initiative was launched by EPRI in 2018 to bring power companies together to learn about pollinators. It is the largest collaboration of its kind in North America.

Agrivoltaics projects like this one are a potential means of bridging the gap between solar developers and rural denizens, who are less likely to have access to solar energy and have become increasingly opposed to it recently, according to CleanTechnica.

“We’re trying to create a model that other solar developers can follow,” UC Davis associate professor and Wild Energy Center Director Rebecca R. Hernandez said in the press release. “This is an opportunity to stack California prairie with solar energy and begin to restore the 98% of prairie habitat that’s been lost.”